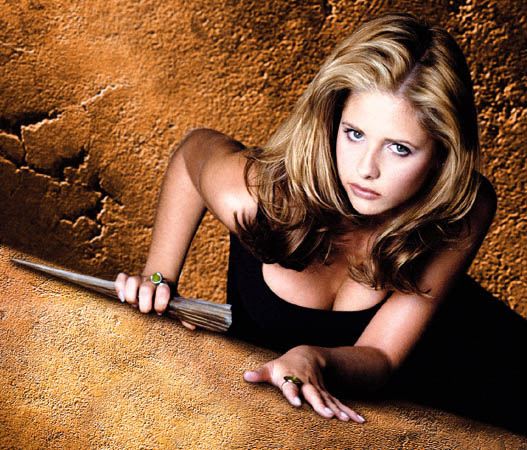 When I was growing up Buffy the Vampire Slayer  was one of my all-time favorite television shows (next to Charmed) and it remains one of my favorites today. I always have that one night where I realize I have nothing better to do than watch something on tv and out comes the dvd binder and I pop the first CD of the first season and thus begins the BTVS marathon. I do this a few times a year and I feel bad for anyone who chooses to be in my life because I have been known to suck people into my marathons (because let’s face it – why watch alone when you can have company).

Buffy (Sarah Michelle Gellar) is one of the best examples of women in power, in this writer’s opinion, because Buffy isn’t a muscular, marine operative. She’s a high school sophomore. A petite, 16-year-old girl who is just as involved in things her peers enjoy and yet she just happens to have a second life as a stake wielding, vampire slayer. She has inner power that is passed down from Slayer to Slayer (always female) which I find to be rather empowering. The idea of a bond that is passed though the years, woman to woman, empowering them with the strength and knowledge to protect the innocents (men and women) around them. Now, in terms of society this is a responsibility that is generally placed on the shoulders of a man which is why this program pushes against the gender stereotype from the very beginning.

In terms of characters, Buffy has a mix of friends but only two true best friends, one being Xander Harris (Nicholas Brendan) and the other Willow Rosenberg (Alyson Hannigan). While Xander is more carefree, if not at times bumbling, Willow is book smart, resourceful and dresses in a way that makes her feel comfortable rather in a way society thinks she should dress. When the series begins Willow is already portrayed as a more suitable comrade to Buffy, but that’s not to say that Xander is without his good points (but for the sake of this blog I won’t really spend time on that). As the series progresses Willow goes from book smart sleuth to witch very quickly. As she discovers her true powers she does struggle, but is able to gain control by herself (for the most part, Tara (Amber Benson) was also very helpful in later seasons) and harness her true potential.

And it’s not to say that BTVS only has STRONG women, but it definitely gives its female characters room to grow and find their own strength. For example, one of Buffy’s fri…ene…..er, we’ll call her a frenemy, is Cordelia Chase (Charisma Carpenter) and she is your typical “popular girl”. Catty, sneaky, manipulative and definitely into the boys. She’s superficial and vain and not who you’d want to represent the female gender. However, she is one of the few characters to move from BTVS to ANGEL (Joss Whedon) and while she seems to hold onto her own personality, she drastically changes into a very powerful, mature and capable woman who Angel relies on heavily throughout the series.

Now, for the most part the major villains of BTVS are male, which seems to be the series way of commenting on men in power.  In the first season we have “The Master”, the second season we have Spike/Angelus, third season we see the mayor, fourth season Adam, and the seventh season “the first”. The villains in seasons five and six were women (though, six started off with male villains), so they were the exception, but for the majority of the series the main baddies were men. One of the major flaws with all of them was that they underestimated the hero just because she was a woman. This is an issue most women still face today when dealing with the men in power. Most women aren’t considered for most jobs or roles because people automatically place limitations on them. The assumption that men are better than women at most activities still exists today and BTVS seemed to take this assumption and crush it into a very fine dust.

Now, Buffy definitely has her share of boyfriends and I don’t think a strong female character has to be without one, however usually boyfriends become the character’s only focus and that’s when it gets dicey. However, the refreshing thing about Buffy is she doesn’t finish the series in a relationship. She doesn’t “get the boy” at the end. The series ends with her surrounded by her friends and allies, not her significant other. And during the time she does have a boyfriend they always turn out to be quite undesirable. She seems to focus on emotionally unavailable men and thus seemingly self sabotages any real romantic relationship.

Now, something that could easily throw a wrench into my argument is Giles (Anthony Stewart Head) who is Buffy’s “Watcher”. He trains and advises Buffy throughout the series and, yes, HE is a MAN. So, one could say he technically has the power. Now, this could easily be true but Buffy isn’t a puppet. She has her own ideas, plans, motives and isn’t controlled by Giles. She even “quits” in season two’s “Helpless” when she is forced to undergo a test without her powers, which leaves her mother in danger. Now, while Giles is no longer a “Watcher” he is still an incredibly valuable ally and is questionably one of the strongest male characters in the show (and again – not macho or muscular, but scholarly and logical). It’s important to remember that yes, while Giles assists and helps Buffy he doesn’t control her at all.

If you haven’t already seen Buffy the Vampire Slayer I highly recommend that you do. Right now, even.  The entire series is available as a deluxe boxed set, so you really don’t have any excuse NOT to, huh?