Patrick Renfrow, founder of the Incon-Crusaders, is no stranger to adversity.

At the age of 21, after a period in which his body starting going haywire, Patrick was diagnosed with spina bifida, a birth defect involving an improper development of the spinal cord. One of the horrible symptoms that began manifesting at this time was incontinence.

Now, if you think about just how much we are conditioned since early childhood to feel shame and a sense of having done something wrong when we’re unable to control our bodily functions, then you can start to imagine how distressing it could be for a fully-grown adult to find out that he may have to wear diapers for the rest of his life.

Discovering something like this in your twenties, at the height of your youthful ambitions, can be a traumatic event to say the very least. But Patrick has cited the event as a turning point in his life, one that both tested his character and forced him to further cultivate said character in ways that would not have occurred had it not been for that event.

One of the outcomes of this period of struggle was Incon-Crusaders, a non-profit organization founded by Patrick with an active presence on social media and a fairly sizable following. Its mission is to fight “the overwhelming stigma faced by those living with incontinence issues and/or managing via the use of adult diapers.” It also seeks to help “provide lower-income members of the incontinence community with the products they so desperately need, yet can’t afford, due to exponentially rising costs and little to no insurance coverage.”

Perhaps Patrick’s personal experience and work through the Incon-Crusaders is why the theme and message of my book, Your Superhero Origin, as explained via my Kickstarter campaign, resonated with him strongly – so strongly, in fact, that he took it upon himself, without my asking him, to design a limited edition poster to help promote Your Superhero Origin. 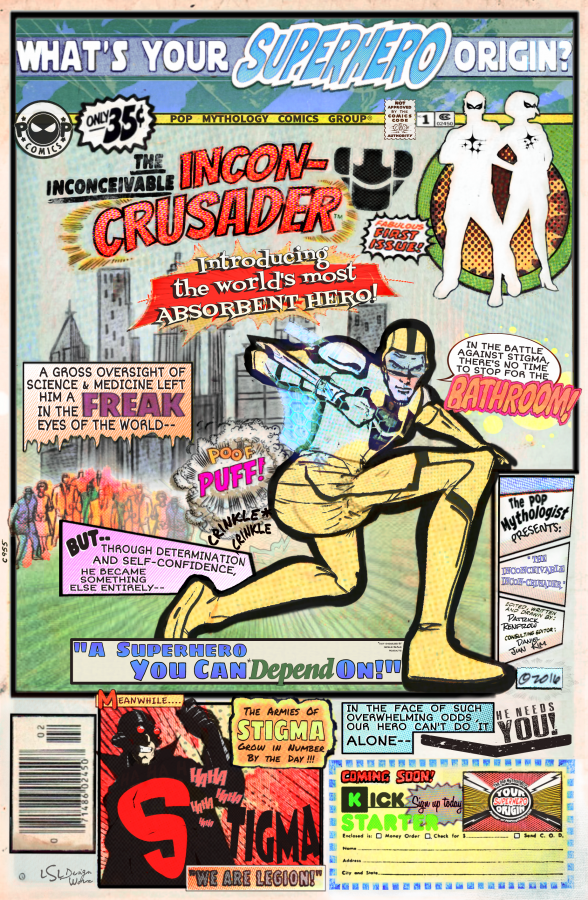 For this poster Patrick borrowed the book’s slogan (“What’s Your Superhero Origin?”) and logo, designed by Chicago-based artist Tom Kelly, and incorporated them into his own brilliant, original design. Coolest of all, he created an original superhero character representing the incontinence community, the Inconceivable Incon-Crusader, a hero born of a gross oversight from the medical industry who became self-made through his own grit and determination. And like any good superhero, the Incon-Crusader must tirelessly battle the machinations of his archvillain, a dark, shadowy figure of menace known only as… STIGMA!!

I just love the vintage comic book look of this poster, complete with the “Pop Comics” faux-publisher logo and the infamous “Approved by the Comics Code Authority” stamp. In the lower right corner is the poster’s shout-out to the Kickstarter campaign for Your Superhero Origin that’s currently going on, and it’s designed to look like one of those old cut-out coupons that used to fill the pages of older comics back when I was a kid.

I’ve known Patrick for a few years now. He actually wrote a number of articles for this site a couple of years back. And one thing I can tell you for certain is that he is both a gifted designer and writer. He has a fertile mind constantly bubbling over with creative ideas, something plainly evident in this awesome poster. But it is his good heart that I admire and respect most of all, and I am honored to be able to consider him a friend, and I thank him for this incredible show of support for my work.

On a personal note, I just want to point out that while Patrick’s work with the Incon-Crusaders has helped and inspire  many, it is his freelance design that helps to pay the bills and puts foods on the table for his family. So if there’s anyone out there with a businesses that could use the services of a good graphic designer and/or writer, I recommend Patrick’s services without reservation and vouch for him completely. Here are some ways to contact him:

Another way to show your support for both the Incon-Crusaders and Your Superhero Origin is to purchase one of these posters from Patrick through Big Cartel.