INTERVIEW: Felicia Day takes a ‘Voyage to the Stars’ 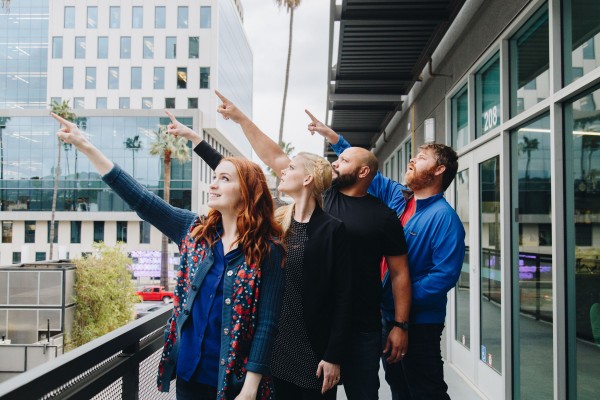 Felicia Day is a queen in her own right: a “Queen of the Geeks”, if you like. She’s been involved with franchises that loyal fans would give up their cloacas (inside joke) to be a part of; she’s written about her experiences and she’s found a degree of success that only her fellow and devoted fellow geeks could appreciate.

She’s made fandom her success.

“I really don’t like to be put on a pedestal or above anybody. If I’m worshipped or perceived to be in charge, then people can mount a rebellion or a revolution against me!” She laughs. “I’m honoured to be called a leader, though, because it’s important to lead other people in any area that you feel passionate about. I happened to start really early in a world where there weren’t a lot of women in geek or nerdy space and now it’s a part of the world – and it’s wonderful.”

Felicia will be seeing more of that success with her latest endeavour, a podcast improv show called Voyage to the Stars along with a stellar-rated cast. I have the great fortune today to sit down with her and talk about this show and about living every superfan’s dream.

I begin our conversation by asking her to describe the project.

“Voyage to the Stars is a comedy improv podcast about four space-faring people who get stuck in a wormhole and are trying to find their way back,” she tells me. “Well, not people, actually. One of the characters is the A.I. of the ship we are on. So, three people and an A.I. going from planet to planet, trying to find their way back home… and leaving a lot of destruction in our wake!” 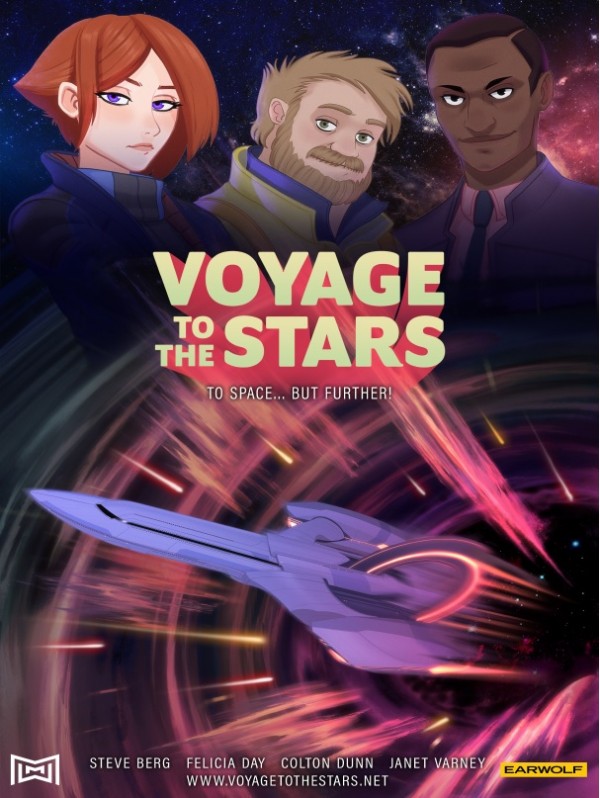 I’ve always loved radio shows. I come from a background of listening to classic radio shows like the X Minus One or comedy classics like the BBC’s Goon Show. But improvised comedy podcasting is a new twist on an old medium that holds a lot of entertainment promise.

By the time I have my conversation with Felicia, I’ve already heard the first two episodes of Voyage to the Stars. It’s hilarious stuff and completely fits into the mindset of fans of Douglas Adams, Terry Pratchett, Star Trek and other popular, geek-worthy franchises. But the unpredictable side of improvisation that expands the scope of the appeal. Fans will recognize the influences of these franchises, as well as others, but the nature of improv allows Felicia Day, Steve Berg, Colton Dunn and Janet Varney to combine them in ways that will not fail to entertain.

“The characters are so fun! Sometimes we never know what’s going to come out of our mouths – we surprise even ourselves!”

The concept behind this show came from Felicia’s friend and former production manager, Ryan Copple.

“We’ve been really good friends and he’s been making web-series for ten years. He’s a pioneer in web-production in a lot of different areas. It was his idea to create this outline for us as performers, give it to us, and allow us to make up the dialogue in between. So it’s not completely improvised; we know where the story is going but we’re allowed to do all the jokes and all the character development and the plot between the two points.”

That holds a lot of appeal for creatively talented performers like Day and the other cast members. 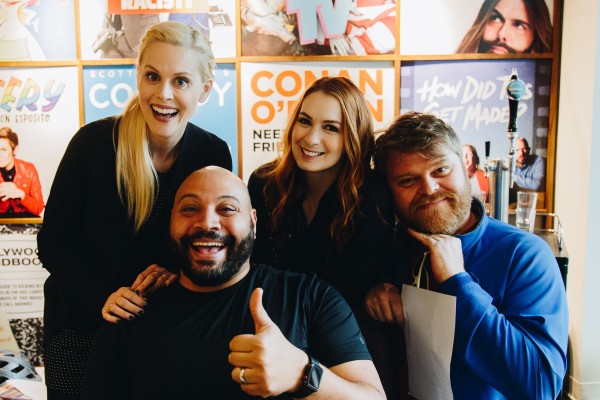 “I just love improv,” she says. “I’ve done improv ever since my earliest days as an actress and it surprises me what comes out of my mouth. When I’m listening, well, when you’re doing improv, you don’t remember everything you say, so when I hear the playback, I’m laughing!”

I had to ask about homages or channeling some of the geek franchises that we, as Felicia’s audience, would be aware of.

“I think we’re all very geeky people – all the actors, and Ryan, so I think there are lot of homages to things like Star Trek and Star Wars, and N’Sync? [*Laughs*] There’re pop-culture references in there. It might not be time-appropriate but as long as it makes people laugh, we’re definitely willing to go there!”

There was one particular reference that really stuck out in my mind, given the nature of the medium. It was wholly appropriate and it was a happy discovery to see that Felicia had the same thought in mind as well. She went on to describe it further for me.

“The Hitch-Hiker’s Guide to the Galaxy is a real inspiration that Ryan sold me and I can definitely see that. It’s a really fun, accreditive reference for space-faring folk!”

At this point, I was hoping for a Pan-Galactic Gargle Blaster to drink and listen to the show.

“I hope so!” she agrees. “That would be really cool! The universe gets built out in every single episode and the further we get into the season, the more we learn about our characters and the more of this comes on. That’s the fun part!”

Speaking of characters, I asked Felicia to describe her character, Elsa Rankford, for us.

“Elsa is a really fun character. She’s a know-it-all, super-enthusiastic and underneath it all, she’s incredibly insecure because she’s not really well-loved by her family. She also has a lot of mystery behind her that becomes uncovered as the season goes on, and that’s a really fun thing to play with. And the great thing is, she always kind of spouts technical jargon! I don’t plan ahead, but I come in with a set of really fancy words so I can sound smart when I’m talking about parts of the spaceship! [*Laughs*]” 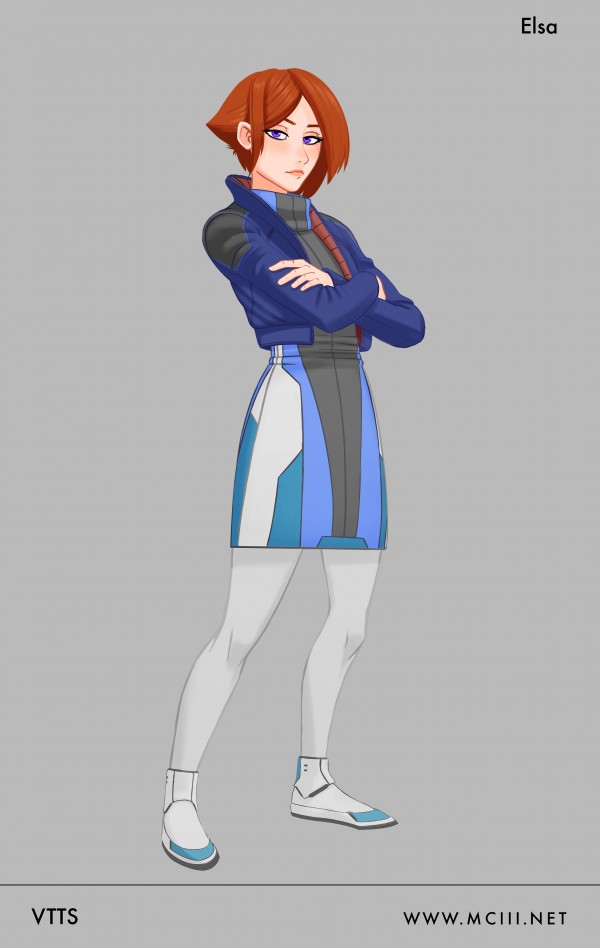 Hearing about this little trick inspired me to ask about any other performing techniques Felicia used on the show.

This naturally led us to a conversation about working with the other members of the cast on this show. Do they hold up as an intrepid crew?

“They’re amazing. Janet Varney – I’ve worked with her for many years. I’ve been on a podcast with her before and she is an amazing force as an actress, a creator and an improviser! I’ve worked with Steve Berg before because he was an actor on Dr. Horrible’s Sing-Along. It’s also really funny because Ryan Copple actually grew up with Steve in Nebraska so it was really coincidental that we both worked together and really exciting to do! Colton Dunn, I had just met briefly socially, but I was never able to work with him. He’s so funny and generous as a performer but also clever and makes me laugh a lot! A lot of the times, when you’re just hearing the podcast, a lot of us are just trying SO hard NOT to snigger into our microphones!”

Felicia lives a fan’s dream. She gets to work in the geek-verse, do this for a living, and her fans love her for sharing these experiences with them. I had to ask Felicia how that felt.

“You know, I’m very lucky in that I get to do what I love. I’m judicious and the great thing is I really define myself as a performer by the choices that I make. That sees other people coming to offer me jobs that I would love. So, I think that if you really define yourself, and what you like and pursue opportunities that help define you as a creator and an artist, then people will see you and acknowledge what you put forward and then you just bring more of that into your life.”

Felicia’s related her favourite moments on the show to me.

“My favourite one involved my friend, Tom Lenk, from Buffy, actually. He was one of the guest stars on one of the episodes. He made me laugh so much. What I really loved most was being exposed to lot of new people that I’ve never worked with, but now I’m a big fan of! Gary Anthony Williams – in the first episode, his voice is so incredible and such a funny improviser that I was inspired to do more improv and be better at what I do because he was so incredibly polished. The whole podcasting medium is so inspirational to me that this I’m excited to see what other people do with it.” 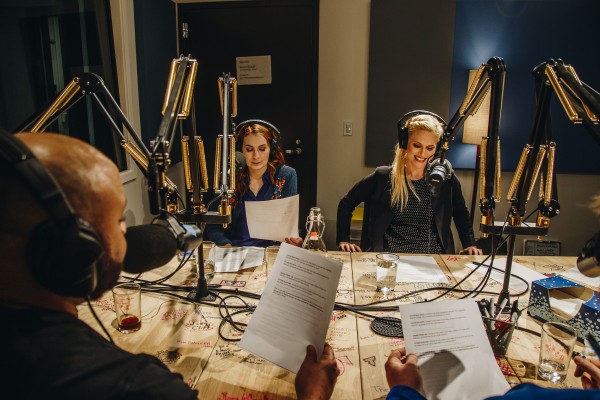 There are a number of special guests who are planned to join Felicia and the talented cast. At this time, Felicia wasn’t at liberty to disclose this list of ten guest stars, but based on the cast we have, and the range of geek talents she can include, it’ll be a list to look forward to, without a doubt.

Felicia represents the realized ideal of a lot of fans. She has turned her geekiness into a professional career and become a creator who has created her own fandom. I have so many friends in my own personal geekoverse who regard her as “my favourite person”. That sort of honest response is not only laudable but genuine.

Felicia Day has the magic touch. When she’s involved with a project, it gets recognized and gets acclaim. As a card-carrying geek of many years, I’ve heard this show and I love it. It’s a refreshing diversion and it forces the listener to rely upon her or his imagination to visualize the story.

It’s important to retain some sort of professional decorum when you are interviewing a creative personality like Felicia Day, but she has a prominent effect on her fans who see her as one of them “making good” with her fandom. She has an inspirational effect and as she says she is “honored to be a leader”, her fans appreciate that factor and reciprocate. I admire what Day does, plain and simple. Her work gives hope and inspiration to her fans.

Voyage to the Stars is funny. It’s a great production that promises to entertain and, due to its improvisational nature, include the fans as they can listen and appreciate the witty and spontaneous aspect to its performance. At the same time, they also have to envision the scene as it is described by these talented and completely geeky performers. This is a geek’s delight and the homages each performance pays to the relevant sources of nerd-dom will surely entertain. There’s a lot of pedigree here and it is choice material.

Voyage to the Stars is available on Play, Overcast, Stitcher, Spotify and Apple Podcasts. To subscribe and receive updates, visit https://www.voyagetothestars.net/

If you respect improve and fandoms, I promise you won’t be disappointed.