How cool would it be if your mom was the captain of a space battleship?

Mothers have had such an integral role in fandom. From Lost in Space’s Maureen Robinson to Harry Potter’s Molly Weasely, moms have not only played important characters in pop culture but have represented its best and most passionate nature. Take Jean Yoon, for instance. Widely acclaimed as the loving Umma, the hardworking and pragmatic mom in the smash comedy hit, Kim’s Convenience, Jean has a great deal of background that really illustrates this point.

We sat down and talked about the influence and importance of the mother role in her work and in pop culture in general.

“You know, it’s interesting because I spent so much of my young adulthood trying to figure out why my mom behaved the way she did,” Yoon told me. “She drove me crazy. But now, as a mom, seeing things from this side of the fence, I have this understanding of how hard moms try – and fail so often. You work so hard to give your kids everything, but at some point, it’s in the natural development of kids, it’s their job, to reject you! [laughs] It’s so heart-breaking! But that’s growth! I hear my mum’s voice – ‘One day, you gonna have children, and then you gonna understand!’ I get it now!”

Umma is described as sweet and loving but also a master of the “sneak attack.” She’s a mom who knows how to look out for her family but has a fierce competitive spirit in ensuring that they don’t get shortchanged.

That’s some fierce mothering and Jean assures me it’s an instinctive thing.

“Paul [Co-Star, Paul Sun-Hyung Lee] and I are aware of our roles on our show. We both try to lead by example and parent, to a degree, on set. I’m the one with a raft of cold remedies in my dressing room – which I am prepared to bring out on a moment’s notice! PLUS, I have massage cream, devices, Tiger Balm for the camera crew, cast – honey, ginseng, essential oils. You can’t help it!”

The Pop Culture Mom archetype is such an essential fixture in our entertainment. Jean epitomizes this not just being the mom on the set as well as the determined Umma in Kim’s Convenience, but also in her roles as Captain Yao from The Expanse or Dr. Hajek in Dark Matter. Whatever the show, Jean brings a fire to her characters that showcases the fierceness and strength of the Pop Culture Mom. 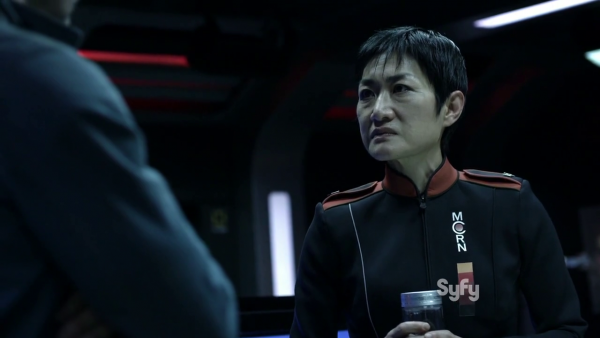 “The North American culture of the nuclear family – the mom and the dad are huge figures,” she asserted.

We learn from our mothers so I had to ask Jean about her own mom and if she ever channeled any of her character into her roles.

“My Mom comes out in Kim’s Convenience. Mrs. Kim is NOT my mom, but there are elements, gestures, voice mannerisms that I have shamelessly stolen from my Mom in tribute. Captain Yao doesn’t have my mom, but has me as a mom? For sure! In Dark Matter – well, that was just fun. I got to …”

At this point we were interrupted by co-star, Paul Sun-Hyung Lee who loudly exclaimed, “SHE GOT TO MURDER ME!”

“With a chopstick,” Jean added. “A pair of chopsticks, actually! It was such a fun day.”

There’s also the cultural element of mothering that has to be remembered, particularly around the notion of encouragement and how important it is to artists in the upcoming generations. Jean remembers the time when her parents were immigrants to Canada.

“Paul and I are the older actors on the show. In the late 60s there was a wave of Asian immigration to Canada. There was also a wave of Asian artists in that wave, 1965 – 1970, especially Koreans. There are a lot of younger artists who look up to us and we’re aware of that. It means a lot to younger artists to hear that they were great because we didn’t often get that kind of encouragement. We didn’t have mentors in our ethnic community. I think there is an awareness of that relationship.”

Encouragement is an essential element in mothering. Umma represents the universal mum. As she has to put up with the different dynamic of being an immigrant mum, the essential to playing a pop culture mom on screen is to remember that the child will always come first.

“It’s the fierceness,” Jean continues. “It doesn’t matter if you’re a Korean mom, a Scottish mom or a Jewish mom – whatever. Being an immigrant mom adds a different dynamic in terms of an extra level of protectiveness. The immigrant mom may not know about the world as much as their kids but there are always parallels.”

At the heart of being a mom though. There’s always food.

“Korean moms – like other moms – show their love with food. They prepare food, take food… even my own mom, who’s 89 now – STILL tries to send me home with food when I visit her! When Umma appears at Jung’s apartment, she’ll always have food, because that’s the sweet spot of mothering!”

In terms of mom moments in the upcoming new season of Kim’s Convenience, I asked if there were any special mom moments to watch for.

“A lot of mom-disappointment!” Jean laughed! “Umma and Janet have some moments this season. Janet is starting to find her path, so there will be some interesting moments to watch for!”

When it comes down to it, the key element in portraying the pop culture mum is the fierce protectiveness that we expect and look for. We know our mothers are warriors and that’s what we want from our screen moms too. That’s what we get from Jean Yoon, whether she’s in charge of a Martian attack cruiser or simply a convenience store downtown Toronto: one fierce mother.

Season Four of Kim’s Convenience drops on CBC January 7th at 7pm and can be streamed on CBC’s GEM. Seasons One through Three can be seen on Netflix.