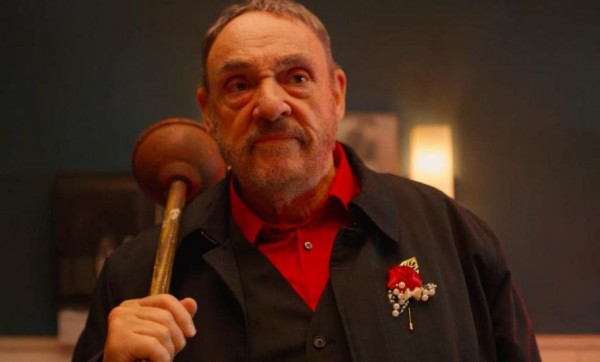 If you’ve ever met John Rhys-Davies, you feel dwarfed in his presence.

The star of epic films like Raiders of the Lost Ark, Lord of the Rings¸ his numerous appearances on stage, screen and television, is one of those actors whose presence can overwhelm an audience with his character, the immensity of his purpose in the story and quite frankly, the pedigree of this man’s acting history. If he’s involved in a project, he immediately gifts it with his history and experience.

“Did you like it?” John eagerly asked me when began to talk about his latest film, Bad Cupid.

To hear John Rhys-Davies utter the guttural word “f*ck” is a complete shock to the system, I laughingly told him!

I received boisterous and whole-hearted laughs in return.

(As an aside, to hear John Rhys-Davies laugh is a near-spiritual experience.)

“There were two schools of thought on that matter.” He tells me. “One, we should cut out the swearing and make it more family-show and the other school of thought said this is an adult show and let’s say it like it is! I loved the idea. This is not a part that I’ve ever been asked to play before. Actors can’t play the same part all their lives. Producers often want your last performances for their films, so it was a great opportunity to do something different. A middle-aged Cupid is an interesting thing. What I wanted to get in there was that light detachment that the Gods have for men. My job, my burden to carry, is to get these people mated, because they’re so damn stupid that they can’t make these decisions for themselves!” He laughed.

Bad Cupid is a small-budget production about a grizzled and cantankerous Cupid named Archie who will stop at nothing, including a major felony to ensure that true love eventually finds its proper match … even if it means pistol-whipping, binding and gagging a prospective groom in a toilet cubicle. John continued on about the character.

“You see, you have no idea that centuries and centuries of tedium have ensued that everyone imagines that their polymorphic perversities are unique to their generation!”

I liked Archie right from the start. You see, I’ve seen John play erudite roles like Leonardo Da Vinci in two episodes of Star Trek: Voyager. We’ve seen him as the lovable and loyal Sallah from two Indiana Jones films and of course, his unforgettable role as the stalwart Gimli, Son of Gloin from Lord of the Rings. Rhys-Davies is a performer who usually plays lofty characters with such scope, heroism and status, that to see him play such a petty and selfish schemer, prepared to achieve the noblest intentions of allowing True Love to foster, by the lowest of means makes this not only a change of perspective but chance to see him in a new challenge. In this role, John is a creature of the Gods, and knows better and is eternally tired of mortals questioning his methods.

His surliness is mistaken for contempt – and I’ve seen John play characters with grumpiness, leadership, loyalty and grim resolve, but never with the type of well-intentioned and entertaining antagonism that Archie the Cupid shows in this film. It’s not contempt, just centuries of knowledge. 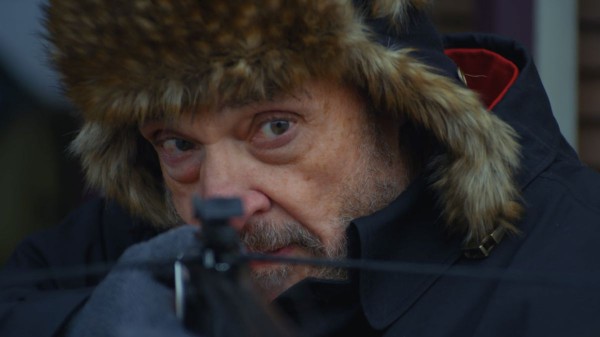 John liked his character as well. “Bulls-eye!” He told me when we brought up a particularly memorable moment in the film! I had to ask him how the role came about.

“Well, sometimes I just get lucky!” He laughed. “However, there are people who I meet from time to time who have a script, an idea, and no matter how small or small-budget the film is, I will certainly give a good script my attention.”

I think I also appreciated the reason for John’s involvement. Like I said, any project John touches is immediately elevated by his presence.

It’s a simple value but the inherent nobility within that value is a chance for it to be absorbed by not just a younger generation of film creators but everyone in general.

“I just like the idea of waking up in the morning and it’s what I’ve done all my working life and I hope my working life continues. I have five movies to do this year and mind you, and I had four movies to do last year. But COVID-willing, this could be a really bumper year!” 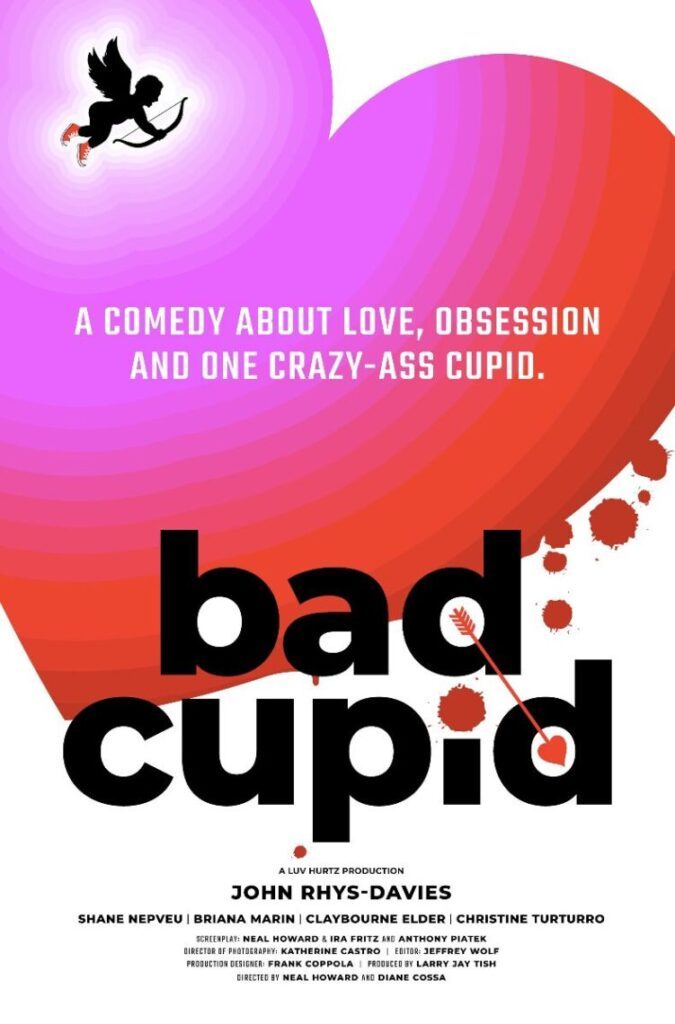 Bad Cupid capitalizes on “cringe-worthy” humour and it’s the type of humour that can be easily appreciated, but one that an audience wouldn’t normally associate with John. We want Archie to be crass and obnoxious. We want him to brutally thrash his way through to doing the right thing and to see Rhys-Davies demonstrating this side of his character that we have never seen before is not only eye-opening but truly fun to watch.

I don’t want to dismiss or diminish the performances of Shane Nepveu, Christine Turturro, Amelia Sorensen or the delightful Briana Marin, but this really is John’s film. The cast is relatively unknown; it’s a small film but there is a genuine sense of excitement that comes out in the performances, and John’s unique role is the focal point. It’s this shared excitement that lends itself to a sense of genuine teamwork and mutual success. John went on to describe this idea further.

“I liked the script.” John continues. “I didn’t have to bring out Performance A or Performance B, or retread something that somebody had already seen me do. But I like newcomers; people starting new careers and one always wants the underdog to succeed. When your name comes up in conversation in the future, these are the people who will say: ‘oh, I remember him. I worked with him – once!’ “

I’ve always been in awe of John’s generosity of his character. I’ve had the good fortune to host him at Fan Expo’s Toronto Comic-Con and was amazed by how much enjoyment he gained in sharing his experiences and personality with his audience. I think it’s this spirit that propels the film. That’s a generosity that only comes from someone with true talent, confidence and experience and how simply nice it is to see that. As a teacher (a shared background that John and I have), that’s truly reassuring to see.

In fact, his first question to me was about my youngest daughter and the memorable interaction he had with her. We talked about that briefly.

“I love children.” He told me. “Sometimes you get through the barriers of age and time into that gentle teasing mode that becomes a glorious thing. She’s a super girl.”

But it really comes down to that generosity of character and personality that sells this film to me. John is a working actor and unafraid to take on a new role but also willing to share that attitude with younger adventurers on the same journey with him. Whether it’s an adoring child, a young peer performer or writer, or a fan, John imparts the same sort of commitment to anyone he recognizes as a comrade-in-arms brave enough and willing to live in this world of dreams that fans and entertainment professionals share. That sort of commitment is hard to ignore.

John also shared with me what he finds attractive in a role.

“The opportunity to show thought, I think. Not many actors get the chance to convey the process of thinking and I live … and love watching people think. I grow, liking people think.”

In this film, Archie is constantly thinking. He already knows the answer but the process of watching him manipulate and manage the activities of these mortals engage in finding the right person to love is evidence of a thinking character and Archie’s character is definitely a fun one to behold.

Lovers are dwarfed when a God-like presence, in character and role, confront them with the right way to pursue their love interests, even if they don’t know what’s good for them.

However, John Rhys-Davies, and Archie, definitely do.