Is the Jay-Z and Samsung deal the Holy Grail of sellouts?

About a month ago Jay Z announced his new album via Samsung commercials. An extended, 3-minute trailer on YouTube featured past collaborators Pharrell Williams, Swiss Beats, Timbaland and Rick Rubin, the latter of whom later clarified that he was not involved with the album but was essentially a prop.

In the deal Samsung purchased one million copies of Jay Z’s Magna Carta Holy Grail and exclusively released it five days early to Galaxy users who downloaded the Jay Z app, effectively making the album already go platinum the very moment of its release. Samsung spent $5 million USD on the copies and $15 million on the campaign.

This gimmick backfired when downloading glitches plagued release night. In fact, the album reached bootlegging websites before many of the 1.2 million Galaxy owners who went through the surprisingly personal process to acquire the application. The app is now facing possible Federal Trade Commission investigation for violating privacy agreements. The million copies purchased by Samsung did not count through album sales in Billboard magazine, although it still sold big enough (in 2013 music industry standards) to reach number one. The campaign has also sparked discussions on whether this multi-million dollar, multi-advertisement deal with Samsung makes Jay-Z hip-hop’s biggest sellout.

Before moving on a disclaimer is in order: although I am a lifelong fan and frequent defender of hip-hop, I do not like Jay Z’s music. I can respect him as a person and an entrepreneur but my music collection includes only four of his songs: the one from the Great Gatsby soundtrack, two with The Roots (my favorite band) playing back up, and “99 Problems” because of Rick Rubin’s amazing instrumental. In preparation of this article I attempted to listen to Magna Carta Holy Grail but it bored me, so I stopped. 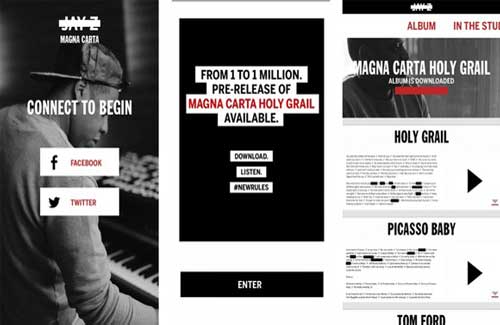 This article has no intention of judging anyone’s racial or socio-economic background. Nor is it intended to cast disparagement on any of the artists mentioned. It’s an examination of the concept of a “sell out” and why some artists are seen as such.

Hip-hop, perhaps more than any musical genre other than punk, focuses on authenticity, or in the vernacular, keeping it real. Jay Z is easily one of if not the most successful hip-hop artists of all time. And just as the figures in his songs, his emphasis has always been on making as much money as possible.

This is the same man who entered endorsement deals with Reebok, Budweiser, Hewlett-Packard, Duracell and had his “retirement album” released on a Nokia phone. He once said of himself, “I’m not a businessman; I’m a business, man.” (I guess Mitt Romney was right, corporations are people.) Even the biography he frequently expounds has been called exaggerated at best and fraudulent at worst. If there were any rapper who would launch his album with a smartphone, it’s Jay Z. Knocking him for appearing in Samsung ads is like saying Michael Bay has forgotten his arthouse roots, Kevin James doesn’t appear in good movies anymore or success has made Kanye West egotistical.

Classically “sellout” is defined as anyone who betrays their own beliefs for personal advancement, usually for financial gain. In art, be it music, film, literature, visual, whatever, this means giving up your integrity for mainstream notice. In hip-hop terms, someone like Nas could be a sellout for flossing up It Was Written (and even more so “Oochie Wally”) after the raw classic Illmatic but Sean “Puffy” Combs was never more than sparkly suits and recycled 80s beats to begin with. The same would go for Vanilla Ice, Rod Stewart and so on.

Many artists have had their sell-out moments. In 1965, Bob Dylan infuriated his fanbase by trading his acoustic guitar for electric. (More recently, Dylan, famous for protest songs, allowed the Chinese government to pre-approve his concert set list). Martin Scorsese went from directing a pair of critically embraced box office flops to helming an 18-minute promotional video for Michael Jackson. The Who, icons of 60s counterculture, allowed their music in a US Air Force ad during the Vietnam War. Orson Welles shilled wine and spent his final months rebuilding Megatron in Transformers: The Movie. The Rolling Stones started up Windows 95, U2 sold iPods, Jewel big pimped herself for “Intuition” and Robert DeNiro made three movies about a bunch of Fockers.

The current undisputed sellout championship title actually goes to the Black Eyed Peas. In the late 90s/early 00s BEP were the heirs-apparent to the jazzy, socially-conscious Native Tongues legacy. Then the band added Fergie, released “Where Is the Love” with Justin Timberlake (who had his own integrity issues after years with N-Sync) and sold 9 million copies of Elephunk. The original Black Eyed Peas sound, and essentially Taboo and Apple, disappeared. Although the band is now on indefinite hiatus, it’ll take extreme selling out to end this reign.

What’s curious about selling out is how it sticks to certain artists and not others. Jay Z’s numerous endorsement deals haven’t done anything to his credibility, but Nas’ aforementioned foray into danceclub crap-hop has haunted him for years. Nobody gave Common a hard time for piloting a Voltron lion for Sprite (apparently the official soft drink defender of hip-hop culture) or squeezing into a Motorola phone booth with Questlove, Madonna, Iggy Pop, Bootsy Collins and a lookalike of the deceased Biggie Smalls. Wu-Tang Clan got a free pass for after taking their Five Percent Nation teachings into commercials for St. Ides malt liquor. Maybe it was because the fans thought the commercials were cool or appreciated increased recognition.

Personally, I’ve always had an intense aversion to selling out. I was that kid in high school who loved Enter the Wu-Tang (36 Chambers) when it was “too weird” for all the other hip-hop heads in my class, but stopped listening once Raekwon’s “Ice Cream” was played on MTV. Years later I was apoplectic when The Roots became Jimmy Fallon’s backup on Late Night, but two brilliant, uncompromised albums assuaged my fears.

I was more militant about anyone changing my own art. The edits to my only story published in the school’s literary magazine (after being asked every year by the editorial staff and rejected as “too different”) pissed me off so much that at the release event I delivered a hastily-written attack poem. And then I ducked out the back door. While years of professional writing have softened my view between fixing and fraud, I still look at the suggestions from publishers, editors and test readers and wonder if it compromises my creative vision. When I add a narrative hook to the first chapter of a slow developing story because the publisher thinks it’ll grab more readers, does that destroy my artistic integrity?

Truth is, we all sacrifice integrity for personal gain. They’re called jobs. Whether it’s a teaching job to support our painting, a government job for our band’s expenses, or the classic actor waiting tables between auditions, we’re doing things for no other reason than money. But we never think of ourselves as sellouts simply because we need to pay the bills. Unless you’ve spent years leading protest rallies against oil drilling and now work for British Petroleum, chances are you aren’t really a sellout.

And neither are most of these artists. Selling a song to a movie, or appearing in a commercial, doesn’t inherently compromise integrity. Hell, even M.I.A., who is considered by many as a radical, hit it big after licensing “Paper Planes” to Slumdog Millionaire and “Galang” to Honda. For lesser known artists, movies, TV and commercials can be a huge help, unless the product conflicts with the art, like those Wu Tang/St. Ides ads (but the music was good, so maybe not).

Perhaps what makes the Jay Z/Samsung deal, or the Stones/Windows, U2/Apple or that Ice T and Ice Cube are now cops outrageous is that none of these people are strapped for cash. They’re not starving painters/musicians/actors taking a job to buy food, nor do these deals further their artistic vision. It’s also not like any of them had been particularly innovative or relevant in years. This could a last grasp for the spotlight, or maybe they wanted bigger houses.

If anything, Jay Z’s Magna Carta Holy Grail is the exact opposite of a sellout album; it sounds like every other Jay Z album. It may as well have come out in 2003. Samsung didn’t make Jay Z sacrifice his integrity anymore than those previous endorsement deals did. No, Jay Z sold out years ago. He admitted it in “Moment of Clarity”:

Putting aside the fact that Jay Z has never rhymed like either Kweli or Common, he is admitting that he gave up artistic ambition for sales. That, beyond a reasonable doubt, is a sellout.

Still, Magna Carta Holy Grail was Jay Z’s 13th Billboard number 1. Selling out his integrity doesn’t matter if his album does the same.[subscribe2]