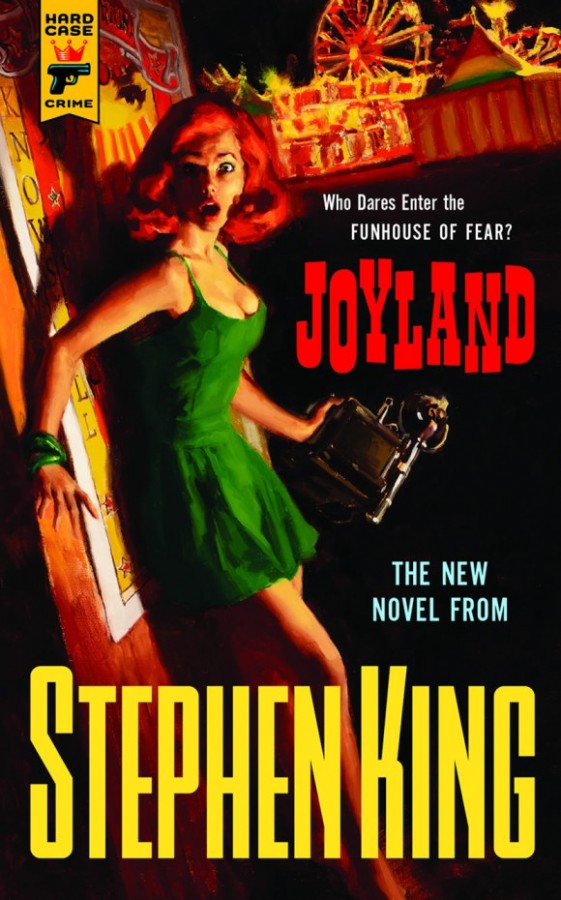 “Is that the best you can manage? The old ghost-in-the-funhouse story? You’ll have to do a little better than that.”

When I learned I was getting an advance review copy of Stephen King’s Joyland, I was a little nervous. After all, a good reviewer must be knowledgeable about the subject. I had read plenty of Stephen King as a kid, but my tastes changed as I grew up. I thought I would need to read most of King’s fifty-plus novels to really do the book justice. But then I realized that anyone who has read all fifty-plus previous novels was going to read this one no matter what I had to say about it.

So instead I decided to write a review geared towards those who, like me, were coming back to King after a prolonged absence. And here it is.

At first glance, the book tells you to expect something different from horror classics like Carrie (1974) or Salem’s Lot (1975). The cover art suggests a dime-store detective novel, with a frightened and barely-dressed redhead hiding behind the pulp-font title. Even the publisher, Hard Case Crime, screams out Raymond Chandler, not the Master of Horror.

“I mean, listen: how many rubes could put sold fun for three months in 1973 on their resumes?”

The bittersweet nostalgia evokes King’s novella The Body (1982)—the basis for the film Stand by Me—more so than a hard-boiled detective novel or horror story. This narrator is Devin Cole, a heart-broken college student who dreamed of writing novels —which he hoped would be “well-reviewed almost-bestsellers” but not the tawdry trash that actually made the bestseller list—“and the kind of short stories they publish in The New Yorker.” This young man’s unstated antithesis is King himself, who writes only bestsellers and not the kind of stories they publish in The New Yorker (although he’s actually placed six stories in this most prestigious literary magazine, with others in Tin House, Harper’s and The Atlantic).

In 1973, Dev takes a summer job at Joyland amusement park (motto: “We sell fun”). The “carny-from-carny” full-timers teach him the Talk—“a sort of rough poetry” spoken in the amusement industry—and a whole lot more. He becomes obsessed with the long-unsolved murder of a girl whose ghost is said to haunt the Horror House. With the help of a couple of fellow “greenies” and a wheelchair-bound boy with “the sight,” Dev fights to solve the mystery, get over his lost love and become a man.

You don’t write more than fifty bestsellers without learning a thing or two about storytelling. Dev is a well-rounded and compelling character whose motivation drives the action. He gets help, but only from characters repaying him for his own good deeds. His friends Tom and Erin are a little flatter, though, and we are told of the depth of their friendship rather than shown it. But the characters as a whole are richly drawn, particularly Joyland’s crew of misfits.

The mystery is well structured, with some good red herrings and a satisfying reveal at the end. Frustratingly, though, much of the investigation that ultimately helps Dev solve the mystery is conducted by a supporting character “off camera,” so we don’t quite get to see how it was done (especially since it’s not clear how a particularly significant conclusion was reached). There is also an important clue that Dev tells us about at the end, but that was never shown to the reader.

This is an entertaining mystery, but there’s more at work here. The book addresses the frailty of both love and life. People die here, and not just at the hands of the Funhouse Killer. The world of the amusement park reveals much about society, such as the near-invisibility of “the gazoonies,” undocumented workers who perform janitorial labor beneath even Dev and the greenies. This world comes alive through the Talk.

Joyland contains memorable characters and a compelling riddle to solve. Those seeking a scare should look to King’s earlier work, but this is a fun book by a man who knows how to tell a story.