Keep calm and go digital: or how I learned to stop worrying and join the streaming revolution

Being raised by parents with neat-freak tendencies bordering on the obsessive-compulsive, it was drummed into my impressionable head from a young age that there are few things in life more satisfying than a good purging of the things cluttering up one’s personal space. Now, it could simply have been that my folks picked up early on my somewhat slovenly tendencies during my adolescence bedroom and used this mantra of minimalism to counteract said tendencies. They failed miserably, by the way, or so I had thought until I finally made the liberating decision, in the spring of 2011, to rid myself of the overwhelming majority of my really quite vast CD and DVD collections and go digital.

Such drastic action was, I freely admit, motivated primarily by financial necessity; I was broke and in need of quick cash to fund a move abroad. Friends and family were stunned at my decision. I must admit there was a definite feeling of sadness and more than a few moments of hesitation as I packed several huge boxes with the records and movies that had defined my youth, and I had to remind myself constantly that these things were merely possessions, not the very fabric of my being. That I would not be robbed of my mojo, Samson-like, when parted from my collection. 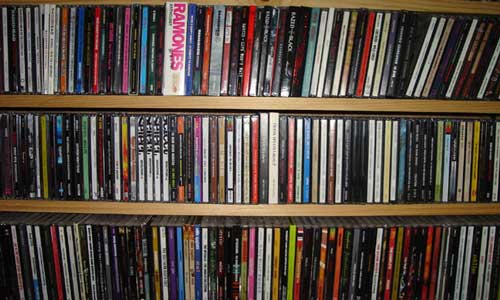 I posted everything on a used-media website and then, once everything was packed up and shipped out to web-based purchasers, I began to feel pretty good about the whole endeavor. I had cleared out the clutter and made a good bit of cash doing so. Mother would’ve been very pleased indeed. It had also occurred to me in the weeks leading up to my decision that, being honest with myself, I didn’t actually use those physical copies of my music and movies anywhere near as often as I used to. Like many, the way I indulged my passion for music, movies and TV shows had changed with the advent of the digital revolution.

For a start, most of my listening experiences now came (and still come) from Spotify, the Swedish-based on-line streaming service offering all the ad-free, unlimited, streaming music one’s little heart could possibly desire for a very reasonable monthly subscription fee. Other sites, such as Bandcamp and SoundCloud, allow emerging artists to gain significant exposure through word of mouth outside the ultra-competitive world of record labels, and puts them directly in touch with eager listeners.

Still feel the archaic need to actually “own” your music, rather than stream sounds to your device of choice? There’s always iTunes. Love ’em or hate ’em, the technological and cultural behemoth that is Apple have pretty much cornered the market in on-line music sales through sleek interfaces, extensive libraries, and merciless marketing. The modern music and media junkie is now in a position to get exactly what he or she has always wanted, and what vinyl records, cassette tapes, CDs, and MiniDiscs could never provide: all your music, everywhere.

Movies and TV shows have also gone mobile in recent years, with viewing habits tending more toward demand for a more flexible and versatile media experience. The increasing appetite for content on mobile devices, not to mention the rise of on-demand services such as Netflix , Hulu, Amazon Prime Instant Video and LOVEFiLM, has drastically altered the way viewers consume their media. This is perhaps observed most noticeably in an extension of the trend started by the advent of the DVD box set, whereby viewers (including yours truly) would gorge themselves on the lastest TV series, often watching an entire season in one sitting.

Netflix in particular is making bold moves to capitalise on this trend by commissioning original series such as the excellent House of Cards, and bringing back the previously cancelled, but much loved Arrested Development. Both instances saw multiple episodes released simultaneously, enabling the viewer far more control over how and when to enjoy the show than afforded by regular television networks. As is the case with the consumption of digital music, the modern movie and TV buff demands a variety of, and control over, content that physical media has struggled to keep pace with.

So by going digital not only had I regained some much-needed space in which to store more practical items like my underwear and gained the chunk of cash required to complete my move, but I also established more complete control over all aspects of what I listen to and watch. Good times.  There was, as it turned out, another benefit to my new found love of all things digital. Something I only began to consider long after selling off my stuff; the not insignificant matter of finance. CDs are bloody expensive. DVDs and Blu-Rays are bloody expensive. Fact is, streaming the vast majority of my media from the likes of Spotify and Netflix has saved me a small fortune over the past few years. A very reasonable monthly subscription to both services sets me back considerably less than I would previously spend per month on the latest releases and, in these ongoing times of financial hardship, that has to be a good thing.

Of course there are drawbacks, and I am not for one moment suggesting that going completely digital is for everyone. Even for an evangelical digital convert like myself, there were some things that I just could not bear to part with during the mass clear-out. Signed CDs by favourite artists had to stay. As did the DVD and Blu-Ray copies of the Star Wars movies. Yes, even the prequels. It would also be untrue to say that I do not, on occasion, miss having something tangible to hold and enjoy. Especially when listening to a new record for the first time I sometimes feel a pang of regret, missing the experience of scrutinising the art-work and absorbing the lyrics, revelling in my obsessive fandom. These days, however, I reassure myself that I am a thoroughly modern man, a citizen of the digital age, and one who has transcended such trifling material concerns.

And it totally works. Yessir. Most of the time.