Sexers and crushing two-handers: An interview with the cast of ‘Killjoys’

These, and others, were among some of the topics I was able to inject into a conversation with the cast of SyFy snd SPACE Channel’s newest hit sci-fi sensation: Killjoys.

After watching the first four episodes of this amazing new production, I am completely hooked. World-building, great characters and a completely exciting premise that allows for a myriad of incredible adventures, this is a show that’s a sure winner. Plus, as a creation of Michelle Lovretta, the creator of  Temple Street Productions’ other  wildly successful program, Orphan Black, you know that it’s got to have the pedigree and all the right elements for success.

Set in a far-off four planet star system known as the Quad, we discover a dystopian futuristic society governed by a quasi-political corporate entity known only as The Company. The society of these four planets is extremely polarized by a disproportionate amount of haves and have-nots. Crime, black markets, smuggling and all sorts of nefarious activities run rampant throughout the system and occasionally, law enforcement needs help from the RAC, or the Reclamation Apprehension Coalition. This is a pseudo-political group of agents who are licensed across the system to track down fugitives from the law, transport convicts or reclaim stolen property. Essentially, bounty hunters in space.

But let’s meet the actors behind the show.

The roles of Johnny, Dutch and D’avin are respectively played by Aaron Ashmore, Hannah John-Kamen and Luke Macfarlane. The group has an incredibly positive vibe resonating from them. It could be residual energy left over from all the previous questions that they’ve had to answer all day, but I prefer to think that this is the normal energy level for this dynamic cast. After all, there was very little hesitation in answering the questions – almost like they had their characters’ responses prepared and ready.

First, let’s talk sci-fi. Do any of you have favourite sci-fi influences? What do you see in them that prepared you for KILLJOYS?

Ashmore: Star Trek: The Next Generation – it was a show that I grew up with and really, really liked.

Macfarlane: Yeah, me too. That was the one TV show we were allowed to watch as a family at the dinner table.

You had a good family.

Do you bring any of that into the show or the role that you’re doing?

Ashmore: Well, I mean there’s a real respect and enjoyment of the genre, because I really like it … but it’s the tone that’s really different.

Macfarlane: The Federation, I think, their world is a little more… cleaner, than our world. They’re a little more polished. Things haven’t gone quite as well for humanity [in our world]!

Well, that’s the thing, isn’t it? You’ve got this great backstory in the show that you can draw on. So what drew you to KILLJOYS?

John-Kamen: Well, for me, it’s character-based – it wasn’t the kind of genre that we’re used to. I’m a sci-fi fan, grew up on Star Wars… but, for me, it was character that drew me to Killjoys. Dutch is such an amazing, complex and layered character… as an actress, THAT’s the kind of role you want to play. I mean: YES! Finally, a character that draws you into such an amazing fantasy world, and you get to create your own world with that.

Your characters, yourselves… what’s in you that’s also in the characters of Dutch, in Johnny, in D’avin?

John-Kamen: I like to think there’s loyalty in Dutch that’s within me in real life. Um… I mean, it would be fun to go around with a gun in real life, kicking some ass [laughter] – just ’cause I want to but obviously I can’t because I’d be arrested. But loyalty, humour, kindness – I like to think that I bring to Dutch the good qualities that she has in her.

Ashmore: I think that there’s a sort of a strange dysfunctional family relationship to the three of us too, that we become, and I think that my character is trying to hold all that together. I think that in my family I’m sort of the one who sometimes pushes the boundaries of like “Guys, we need to talk about this, figure it out”, you know? And in certain respects I think that’s an element that I relate to a little bit – I mean, obviously we’re talking different scenarios…

Like fixing an intelligent ship or experiencing violent childhood regressions!

Ashmore: Yeah, that’s totally the type of thing we get up to at the Ashmores!

Macfarlane: Yeah I know that there’s something really about D’avin that wants to belong to a group. And that’s something that’s always been inside of me, kind of always feeling a little bit like an outsider but really wanting to be a part of a group. I think that’s what D’avin’s quest is: he really wants to be a member of a group again. He was a soldier, and I think that was really important to him, and that fell to s**t[chuckle] and now he’s in this team and he really wants that to work out, but he has a hard time being a part of a group although he wants it so badly.

He made level four!

Wouldn’t Michelle (Lovretta) be upset if you gave it a name?

Ashmore: Michelle is so good at names.

Macfarlane: She’s really, really smart with names so I wouldn’t mess that up … this is a tactical long gun. That’s not my favourite one, though; the one I love is my short gun.

Ashmore: Well, they’re all sort of personalized – our handguns, right? Like, the long rifles are all the same for us, but our sidearms are all different, right? And they’re all like personally fitted for us.

John-Kamen:  That’s Dutch’s (points to weapon in poster) – it’s my favourite. It’s like another limb. I remember I was actually walking around looking for my gun going “where is it? Where’s my arm?”

Ashmore: The prop guys would ask us, “Do you want us to hold those?” and we were like, “No, don’t even think about it.”

John-Kamen: The crushing two-hander! Yeah, that’s probably my favourite! You’ll see what that is!

Still geeking out – what tool or piece of equipment can Johnny not do without?

Ashmore: Lucy. Without a doubt Lucy is his companion – the piece of equipment that he loves the best. Though I think he’s like, into anything and any of the tech, geeky stuff. There’s a couple of episodes where, you know, somebody else has got a piece of equipment that he’s definitely really interested in, and  he’s like – yeah, I’m definitely getting that. The tech stuff is really up his alley.

So what do you guys do for downtime?

Ashmore: In the show?

Ashmore: Well, in the show – we work really, really hard and we play hard. And it’s dangerous out there and stuff like that. We blow off steam. The Royal is like our home bar. We do a lot of drinking and we hang out.

John-Kamen: Your character has sex… a lot of sex.

Ashmore: There’s a lot of that as well.

Talk to your audience: tell us what makes this show the most unique sci-fi show on TV right now.

Macfarlane: We are seeing a lot of characters that we’ve seen before but we are seeing a lot of relationships we haven’t seen a lot of. I mean, one of the things that I think is so exciting that we see on the show is these two guys – a man and a woman who live and work together and they’re best friends. It’s not really sexual and it’s not the same old trope that we’ve seen before: “Are they going to sleep together?” It’s like why can’t men and women simply be friends? And I think that’s a really cool thing to see on this show.

Macfarlane: I also think what makes the show really cool is that it doesn’t take itself too seriously, but the content is really serious.

John-Kamen: I mean, I already said this earlier on, for me it’s just so amazing that how we’re so grounded in space and it’s incredible and the earthiness, the politics of it, I think, you know, you can really relate it to today. And there’s humour, there’s passion, there’s action, there’s grit – it’s all packed within an hour – you’re really gonna get your money’s worth.

Ashmore: I think people are really going to be blown away by the effects, by the world that’s created, because I know I was. Even reading it off the pages but then seeing everything and the world that was made by the effects team, the location team, by all that stuff – I was really, really excited by all this stuff. So I think that other people will be as well.

Thanks for your time, guys! You’ve gone through a whole gauntlet of interviews and I was your last one.

John-Kamen: And what a lovely way to end!

And cue the blushing. 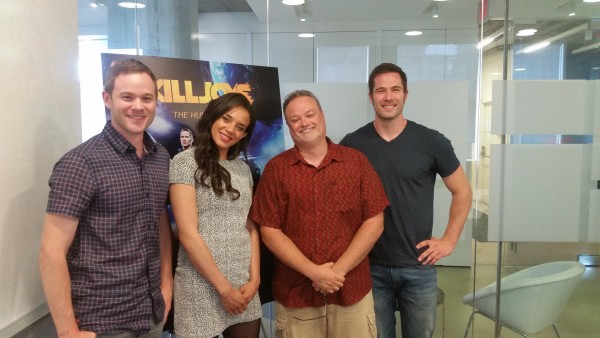 So there you have it.

This team was pure fun. Think of a country cousin (me) who’s come to town to be entertained by the in-town urbanites and you have a good sense of the atmosphere in the room. If that’s the vibe this talented tri puts out in real life, imagine what they will do on the show. In the middle of this dark and scary universe are these intimidating but principled and loyal characters who work hard, play hard and watch each other’s backs. Life is grim in the Quad, but to redeem it are these diverse and dependable heroes who follow the code: the warrant is all.

Killjoys  is world-building at its best. You are compelled to puzzle these adventurers out who seem to know their way around the universe, but not their companions’ secretive and mysterious pasts. Not only do we grow to understand the world that producer-writer Michelle Lovretta has built for us through their eyes, but we also grow to understand them more. I couldn’t have imagined a more apt team of characters to go out there and restore order to the Quad.

Now I really want to be a Killjoy.

Killjoys  premieres this week on Friday, June 19th at 9 PM ET simultaneously on the SPACE Channel in Canada and SyFy Channel in the US.

You guys really need to see this show and meet this rip-roaring new sci-fi team. Oh, and don’t forget to check out “Sally.”