I had absolutely no idea what to expect when picked up this series, Locke & Key, and I think it’s read best that way. I had no prior knowledge, save that it was written by Joe Hill (who is solidly becoming one of my favourite writers) but I have to say, it is the most compelling series I’ve read in a long time.

In order to preserve that same sensation for any other readers out there, I’m going to try and write about this with as few spoiler details as possible.

The first HC volume is titled “Welcome to Lovecraft”. I just love that the title immediately makes a Cthulhu reference. Anyone who loves a good horror knows that this H.P. Lovecraft allusion is like chum in the water: an invitation to all the horror sharks to come and feed. But this is just a nibble to tide you over until the real feast begins.

I think that the whole concept is completely unexpected is what makes this series so mesmerizingly good. The first few pages begin with an assault on a high school guidance counsellor and his wife in their island family retreat by a former student and his less-than-stable friend. This isn’t the main story – oh no, the fact that the weird stuff happens to the family trying to heal after this event is the real meat of the story. Then the story takes you down the rabbit hole.

I loved every page turn of this series. After “Welcome to Lovecraft”, I wasted no time in devouring “Head Games”, “Crown of Shadows”  and forced myself to make room for “Keys to the Kingdom”, “Clockworks”. I had to stop and wait in excruciating patience for the sixth volume; “Alpha & Omega” to arrive from the publisher, IDW.

As an aside, when it did arrive, another pretty cool thing that came with it was the slipcase for all six volumes. If you’ve collected all the hardcovers, IDW gave you the option of ordering the slipcase to house them in. I’ve included a picture, and I have to say, it’s really sharp. 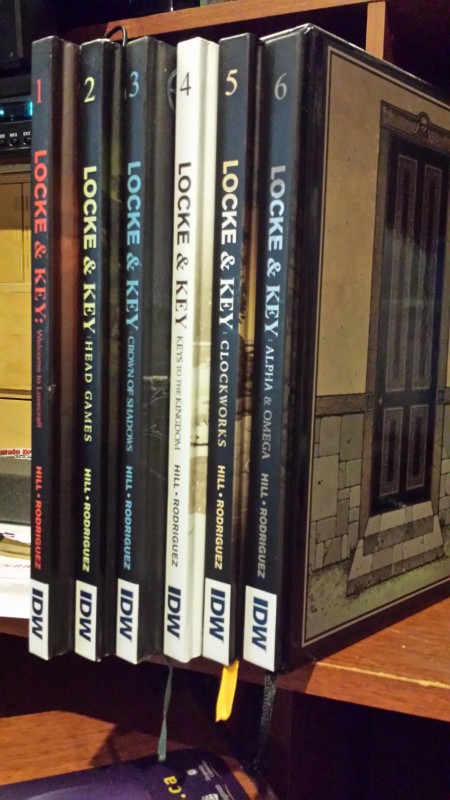 “Alpha & Omega” is the perfect completion to this series. Not in the typical “happy ending” or “justice for everyone” formula, but in that all the secrets have been revealed. It’s a perfect story. Everything gets neatly tied up, not just for the reader but for the characters who have questions about their own past and their own selves. It’s an amazing journey that we, as visitors to Keyhouse get to go on with them. Nothing is abandoned and even the villains realize some sort of thoughtful development and resolution.

I found Gabriel Rodriguez’s art somewhat reminiscent of Jonathan Luna’s (of the Luna Brothers’ The Sword  from Image Comics). It’s solid and defined but also possesses flexibility and action. It’s exactly what’s needed to depict the impossible things that Hill imagines. As the volumes progress, the art gets even better.

I’ve already read and re-read these volumes at least three times each now. Why? Because I honestly don’t want to leave Joe Hill’s house. Sure, there are some pretty horrific things that happen here, but there are also some fantastic things to marvel at and contemplate as well. It’s a fascinating place to visit, but as in all horror stories, I certainly wouldn’t want to live there.

Still, the multiple visits give you an idea about how compelling this series is. Like me, if this is the first time you’ve heard about it then I certainly hope I haven’t told you anything that might spoil the effect of being completely amazed by it.

Go order it right now… I compel you.