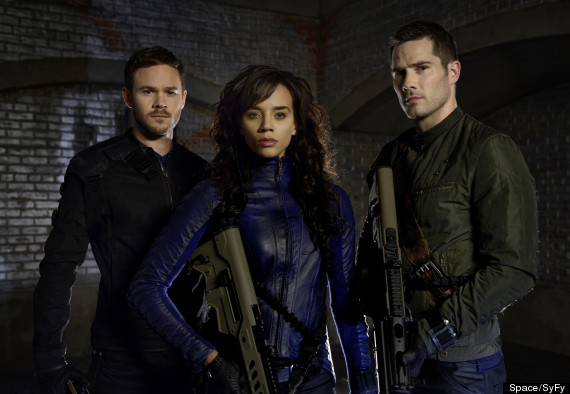 Have you ever had the experience of exploring a place like a new neighbourhood or a bazaar and being unable to stop wandering? After watching the first four episodes of SPACE Channel’s newest sci-fi series Killjoys, that’s how I feel.

World-building is such rewarding, creative fun that it’s a real pleasure to see a television show constructed by a team that shares that same value. After all, if you create a rich and detailed environment that is truly diverse, then the series takes on a life of its own and practically writes itself. It almost becomes a living thing that grows and matures with its audience who appreciates it more.

The setting of Killjoys is a four planet system known as the Quad. The government model is a corporate one known simply as The Company that bases its system of rule on economic motivations and objectives. The Company employs contract agents from an organization known as the RAC (Reclamation Apprehension Coalition) to apprehend fugitives like indentured servants, recover stolen property or use lethal force in sanctioned assassinations of political or otherwise dangerous undesirables. The agents are colloquially known as Killjoys.

Hannah John-Kamen and Aaron Ashmore star as two of these Killjoys. Dutch (played by John-Kamen) is a beautiful and deadly assassin with a mysterious background. She is a level 5 Killjoy sanctioned to use kill and heads up her own team. Johnny (Ashmore) is a technology whiz and level 3 Killjoy. Together, with their artificially intelligent ship, Lucy, roam the four planets of Westerley, Qresh, Leith and Arkyn in the pursuit of fulfilling their warrants.

Well, not Arkyn; Arkyn is off-limits to all, including Killjoys. Why? Well, that’s one of the fun aspects of exploring a universe like this one: discovery.  I’m sure we’ll find out at some point.

The first episode, “Bangarang” sees the introduction of an eventual third member to the crew: D’avin, Johnny’s estranged brother and ex-elite soldier, played by Luke Macfarlane. When D’avin’s face is plastered across the net with a sanctioned death warrant, it’s up to Johnny to forsake his partner in search of his brother. A good origin and introduction episode, we get exposed to the characters but it is the delightful little teasing glimpses into the structure of this world that are really entertaining. The system of government, the function of the killjoys as well as the different cultural aspects like history or religion really provide a true sense of believability and background to the plot.

You also get a sense of the different levels of society that are at play in this universe created by Gemini-nominated Michelle Lovretta. The creator of Lost Girl, another show that shares world-building precision and detail, Lovretta clearly has a Whedon-esque vibe in her presentation of the Quad’s inferred sense of history. This is an unspecified far, far future without explanation that we simply and enthusiastically accept in order to see more of its background.

There are haves and have-nots as the Killjoys interact with all aspects of this society in pursuit of their warrants. They are nation-less, without loyalty or fealty to any political entity and serve in pursuit of the code that The Warrant is All. This makes them the perfect agents to interact within this universe but operate outside of its jurisdiction. Even their ranking and status marks them apart from society and allows us to explore more and more of it in the process. They are not only mere characters; they are our ambassadors who welcome us into this fantastic new universe as well as sharing their adventures.

We see this very clearly in the second episode “The Sugar Point Run”, as the Killjoys tangle with a local warlord and scavengers who desperately eke out a living in a bombed-out city, destroyed by the Company for some reason that we can only guess at. We desperately want to know what sort of conflict caused the destruction of the city and why these people live the way they do. Are they former enemies of the Company? What sort of crime did they commit to deserve a way of life like this?

The more questions we ask, the more our interest in this show grows.

Episodes three and four allow us to see more of the worlds of Leith and Qresh and also glimpse into the mysterious backgrounds of both D’avin and Dutch. The development of these characters is a progressive one that is well-paced and appropriate. We learn more about them in well-measured amounts, allowing us to accept them readily with no interference with the plot, which is a difficult and subjective thing to achieve early on in a new series.

The fourth member of this group is their near-sentient intelligent ship – Lucy. She provides a mobile base of operations for the Killjoys as well as a home. Lucy’s origins are also shrouded in mystery that hints at yet another layer of potential story material. While she shows a particular fondness for Johnny, there is no doubting her loyalty to the whole crew.

From Bell Media, SyFy Channel and Temple Street Productions,  this exciting new series sees its debut on SPACE Channel on Friday, June 19th at 9 p.m. ET. Make sure your television is locked and served to follow the adventures of interplanetary bounty hunters as they hunt fugitives, recover stolen property and explore the distant planetary system known as the Quad.

Remember: The Warrant is All.