The Pop Mythologist May 27, 2013 Applied Geekism 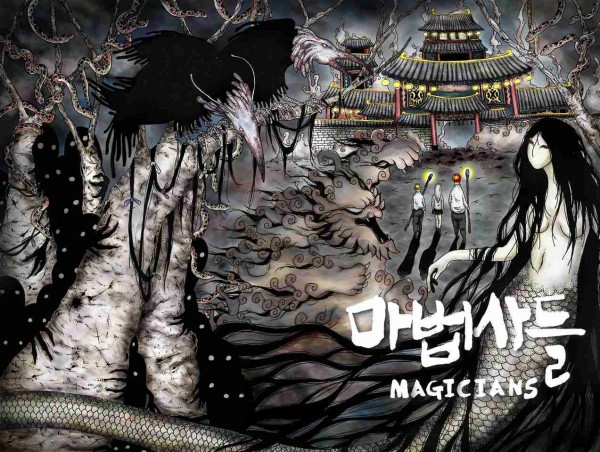 Magicians, by author-game designer Kyle Simons, is a  new and unique RPG (role-playing game) system and book designed to help students learn the Korean language while playing a game that takes place in a Harry Potter-like world populated with magic and monsters.

The rationale is simple: Among the obstacles to learning a language is lack of motivation, the drudgery of study, and sparse opportunities to practice. Magicians motivates students who wish to learn Korean by using a gaming system in which the only way for players to advance in the game is to advance in the language. This system ensures that the game is suitable both for beginners and higher-level students.

It also makes the process of study fun and self-motivating by letting students approach the language through a subject matter that interests them. (Tim Ferriss, author of The 4-Hour Workweek, once wrote a very interesting blog post arguing the importance of this).

I read Kyle’s book intending to do a regular book review but, while going through it, had so many questions that I decided to do an interview instead:

Q: How did you first get the idea to fuse a role-playing game with a language learning system?

A: I really wanted a magic system in an RPG that felt more like (or at least abstracted better) the magic in types of fiction I really enjoyed like Ursula K. LeGuin’s A Wizard of Earthsea or Lev Grossman’s The Magicians. That’s how the language aspect came into play – as magic is a language in Earthsea and in The Magicians, the characters in those novels learn all kinds of languages to cast spells and most fiction has that oral component that is necessary when using magic. From there, I starting thinking that it would actually be a lot more worthwhile to learn an actual language you weren’t familiar with rather than making a fantastical one up from scratch. It would end up both being easier and harder in a way – since the language was already there, but you have to teach it in a fun, interesting way in order for it to work well with the game. 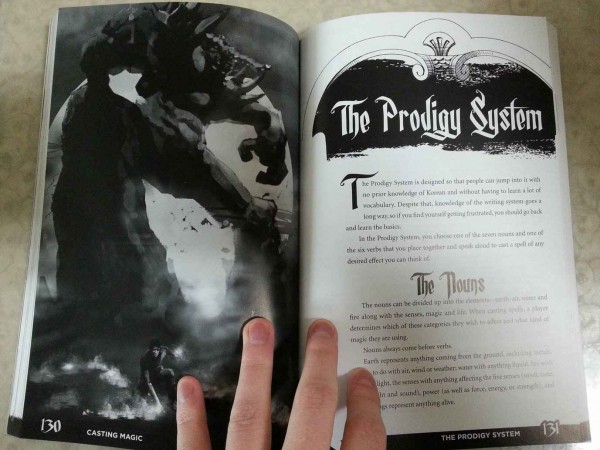 Q: Why did you choose to make Korean the language of study as opposed to English which would allow you to potentially tap into the larger ESL market?

A: The language of magic in fiction has always been more of a foreign thing, something that the protagonist has to learn in order to start grasping the intricacies of it and to start casting spells. Using Korean had a number of advantages from my point of view. First of all, not many English speakers have much experience with it so it would be completely foreign in both sound and writing. Second, it’s actually a really easy language to learn and grasp the basics of. I really wanted it to be a completely foreign language to simulate and create a parallel with the fiction in the game since, in the game, you play students at a school for magic. As you get better at the language in real life, your character grows in power and gets better at casting magic in the game as well. The ESL route is still something I plan on doing in the future, but from the start I wanted to create something for someone like me in the past who would have really liked a game that I would have wanted to play anyway but one that I could also learn a language from as well.

Q: Is it possible that you or someone else could work off of Magicians to make a general RPG-language study template that could be adapted for any language, at least theoretically?

A: It’s definitely possible, and it’s something I would thoroughly encourage. In that spirit, I’ve been putting together a hacker’s guide to the game. For people who want to change the language of the game, I talk about the pattern and reasoning behind the structure I use in Magicians (learning pronunciation and alphabet, expanding vocabulary, sentences, grammar and key vocab linkage) and I purposely made the language part easy to substitute with another language. Depending on the language, there’ll always be some extra bits you may want to worry about but it should largely be a similar process that will work.

Q: I was impressed with your knowledge of Korean legends and mythical creatures. I grew up with this stuff so I can say it’s pretty accurate. How much research did you do?

A: Thanks, I tried to do it justice. A lot of the stuff comes from built-up knowledge over a few years being here and things some people say. For the book though a lot of it was asking around, inquiring upon teachers and friends. There were a few books to be had at the school as well but I also remembered a lot of the stories I heard from students when I was teaching or tutoring (they love to talk about scary stories and urban legends). 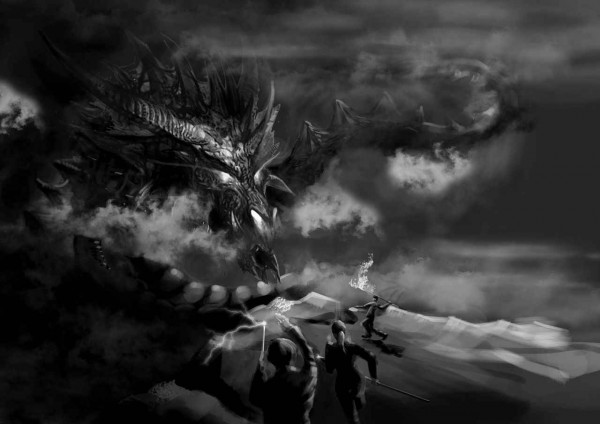 Q: You mentioned The Wizard of Earthsea and the novel The Magicians. There also seems to be strong influences of the Harry Potter series. For example, a school of magic for young people being at the center is one obvious parallel and also the way students enter/exit the school vis-a-vis the city of Seoul (like how the students in the Potter series use the magic train to go to and fro Hogwarts and London.

A: Harry Potter was absolutely a large influence. I would say that in terms of the language aspect and the overall idea and origin, the Earthsea trilogy played a larger role, but in terms of the setting and how I wanted it to work, Harry Potter was huge. There were practical reasons for this, like it being widely known and popular. I felt like the reader would grab a hold of common elements that are familiar to them from Rowling’s books and run with them fairly easily. Since the game was about language learning, and it took up a large portion of the book, I wanted absolutely everything else to be ridiculously easy to learn and jump into.

Q: The single most fascinating thing for me in your book was this idea of pain, frustration and dissatisfaction as being the source of a magician’s power. I resonated with that because, for me, magic is a metaphor for creativity and pain often fuels creativity. Could you talk about this pain mechanic in the game?

A: The whole idea behind that mechanic came out of The Magicians by Lev Grossman (an amazing novel). When the protagonist finds out about magic, he keeps expecting it to be the best thing that’s ever happened to him and to be something that he can use to solve all his problems and to finally be happy; he eventually finds out that there’s far more to it than that and that sometimes the only one that can fix you is you. In the novel as well, frustration fuels magic. In particular, one quote set that whole ball of wax in motion:

“A magician is strong because he feels pain. He feels the difference between what the world is and what he would make of it… A magician is strong because he hurts more than others. His wound is his strength. Most people carry that pain around inside them their whole lives, until they kill the pain by other means, or until it kills them. But you, my friends, you found another way: a way to use the pain. To burn it as fuel, for light and warmth. You have learned to break the world that has tried to break you.”

Fun fact: Magicians was actually going to be the official game for The Magicians novel and I had talked to Lev Grossman about doing it, who was really excited about it at first, but we soon ran into issues as the rights to the book and the Magiciansverse was sold to a TV studio. 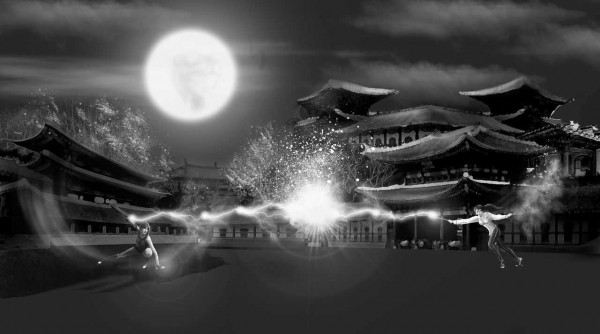 Q: Is your game the first to combine RPG with language study? Are there others out there and is this starting to become a trend?

A: As far as I know, I’m the first to combine it with language learning in any way actually, especially with text-to-speech. I don’t think it can even be called a trend yet but, wow, would I love to see that happen. I’m really interested in the idea of slipping some educational elements into a great game to enrich the experience a little. There are some games that can and have been used for teaching in the classroom though – just not for language. Pete Figtree does a Ruthless Diastema podcast and there’s also another podcast called Edgamer that focuses on taking games and bringing them into the classroom to teach various topics – like Shakespeare, rhetoric and debate. It’s something I’d like to see a lot more of.

Q: What has the overall feedback been like so far?

A: The feedback so far has been overwhelmingly positive – even people who have no interest in language learning, Korean, RPG’s or all the above have all found value in it. For those that have tested it and played it the response has been great as well! There is going to be a lot of failing [to cast spells] in the beginning of the game while learning pronunciation and using the text-to-speech programs so making failure itself a  fun and interesting part of the game was something I spent a portion of the book addressing. It’s gotten great reviews from people who have bought the digital PDF version online, so I’m hoping the physical book will be well received as well. 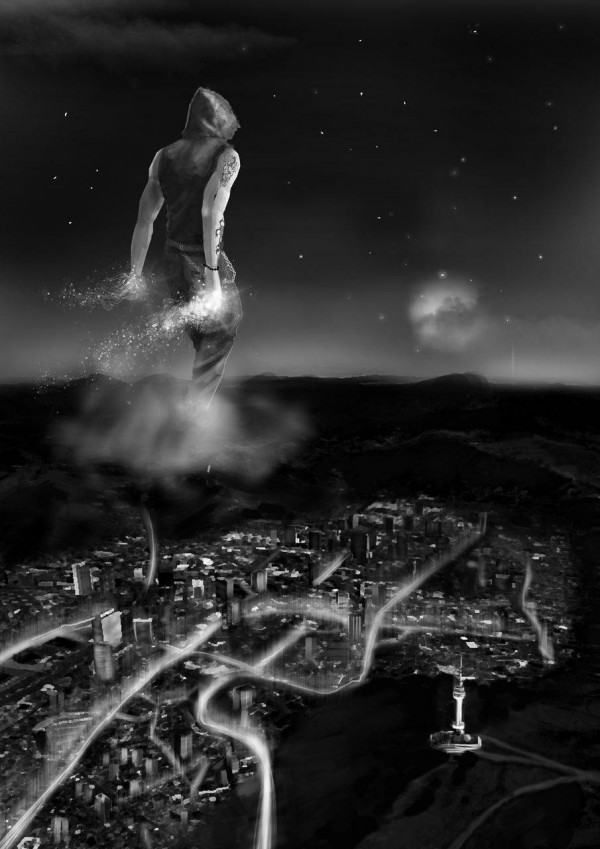 Q: Have you gotten any comments from professionals and administrators in education who either concur with the idea of merging entertainment and education or are at least intrigued by it?

A: If you look at the comments on my Kickstarter page there are a whole bunch of teachers and people in education who have either said they would love to adapt and use it in their classroom and some that have already started doing it. One of the backers actually runs multiple groups in his classroom, with each group learning a different language so just watching it inspire creativity like that and seeing people using it as an extra tool in their language learning repertoire is extremely gratifying.

Q: What’s your greatest hope for the game? What kind of things do you want it to lead to for your career?

A: My greatest hope for this game is that the gaming and language-study communities are encouraged and continue to thrive by people putting out their own hacks and making their own games where they slip their own educational goals into them. I love the idea of getting a little more out of your gaming, or learning something as a side-effect of playing a game, especially if it’s useful and something you want to do anyway. In terms of my career, I’m going to be using Magicians for my thesis paper in school and I hope to do some research around it. Marrying game design with education would be an awesome thing. If I could do it in a professional capacity and end up teaching the topics I’m passionate about, I’d be a very happy man.

Read more about ‘Magicians’ and buy the book/e-book here.