I met former Marvel Comics editor-in-chief Jim Shooter… and I shut up, I listened and I learned.

I didn’t meet him the usual way that I normally meet comic book celebrities. I didn’t go to a con, approach his table, shake his hand and then get him to sign something. No, for this one I did it old-school. I made contact, got to invite him to Toronto ComiCon, hosted the Secret Wars Reunion panel (with Mike Zeck and John Beatty) and then interviewed him afterwards for this article.

Yeah, that’s what I call the old school way: a lot of hard work, preparation and a good idea of what I wanted to get done.

In fact, I’d say Jim did everything the old-fashioned way too: he listened, asked questions, rolled up his sleeves and got his hands dirty. He was prepared, researched and put a lot of thinking into his choices. But what I found really interesting was his candid and pragmatic attitude.

You see, we tend to think of comics as a “fun” business. Truthfully, in an industry that includes all sorts of creative and artistic types, we tend to forget that it has a business side as well. Jim’s exposure to this industry was very early on, and was marked by a practical, business-oriented approach at a young age. If there was anyone who had an early grasp on this side of the industry, it was him.

I asked Jim about his start in comics. He had submitted a story about the Legion of Super Heroes back in 1966 to the then National Publications. He was 13 years old. The fact that he envisioned this and then actually did it at such a young age was astounding enough, but it was his motivation that really impressed me.

“My family needed money,” he said. “It’s not like they were hiring 13 year olds at the steel mill and delivering papers wasn’t going to cut it. And I knew comics. So I spent a year to figure how they did it – the structure, the plot – I was a pretty analytical little kid. Then I just did it.”

Jim was pretty unfazed in relating this. I mean, he’s had an entire lifetime to accustomize himself to the idea that he was a bit of a boy genius. But if there was anything that struck me about Jim’s character it was his candid nature. Jim, the 13 year old, wanted to write comics. So he wrote comics. Then Stan Lee wanted him to write the Spider-Man newspaper strip for him – so Jim did that too.

I asked him about the people he felt had taught him the most in his career.

“My mother believed in me enough to send the letter,” he began by telling me. “Mort Weisinger, of course. He was strict, mean – mean as a snake, let’s face it. But I shut up, I listened and I learned. In fact, I listened to everybody. I just paid attention. If the inker George Klein talked to me, I listened to every word he said. I was pretty sure I didn’t know it all. Afterwards, I had some adventures and then I went to Marvel. Then there was Stan.”

I asked Jim how that relationship came about.

“Stan needed someone to help him with the daily newspaper strip. He needed someone to work out the plot. John [Romita] would then draw it. First, he hired Len Wein – that was a big prestigious honour – at least it was for a few weeks because then he fired Len. He didn’t like what Len was doing. After that nobody wanted the job because nobody wanted to be fired by Stan Lee. Finally, he asked the current Editor-in-Chief Archie Goodwin to make a list of the best writers at Marvel in order from best to worst. There were 33 on the list and my name was at the bottom. It’s not that Archie liked me less, he was being political. If guys like [Chris] Claremont saw my name above his, there’d be trouble. So even though I don’t know what he really thought of me [*chuckles*] there I was: Number 33.”

But Jim was surrounded by exemplary creative talent. His tenure at Marvel as Editor-in-Chief allowed him access to some of the greatest comic editors, writers and artists of the day.

“We had the best people there were: Archie Goodwin – you can’t do any better than Archie Goodwin. Larry Hama, Louise Simonson… those are the Big Three that stand out in my mind. Writers and artists? Michael Golden, Bill Sienkiewicz, David Michelinie. Roger Stern – that guy doesn’t nearly get enough credit.”

Speaking specifically, I asked Jim what it was like working with legendary editor and writer, Archie Goodwin.

“Well, it was funny. Archie was the Editor-in-Chief before me. I think he felt he was being pushed out to make room for me. It was extremely awkward. Archie… well, though he was the all-time great, superstar creator, he really wasn’t a business guy. He wasn’t interested in the administrative side – and he wasn’t good at it, quite frankly. It’s hard to be good at something you don’t care about.”

Goodwin’s background at Redbook magazine gave him full credentials to take over the reins of the then-new magazine extravaganza Epic Illustrated [Note: I provide a full overview of Epic Illustrated in this month’s edition of BACK ISSUE magazine, Issue #88, April, 2016 published by TwoMorrows Publishing, available at comic stores everywhere.]. As a matter of professional curiosity, I was interested in asking Jim more about this phase of his tenure at Marvel. 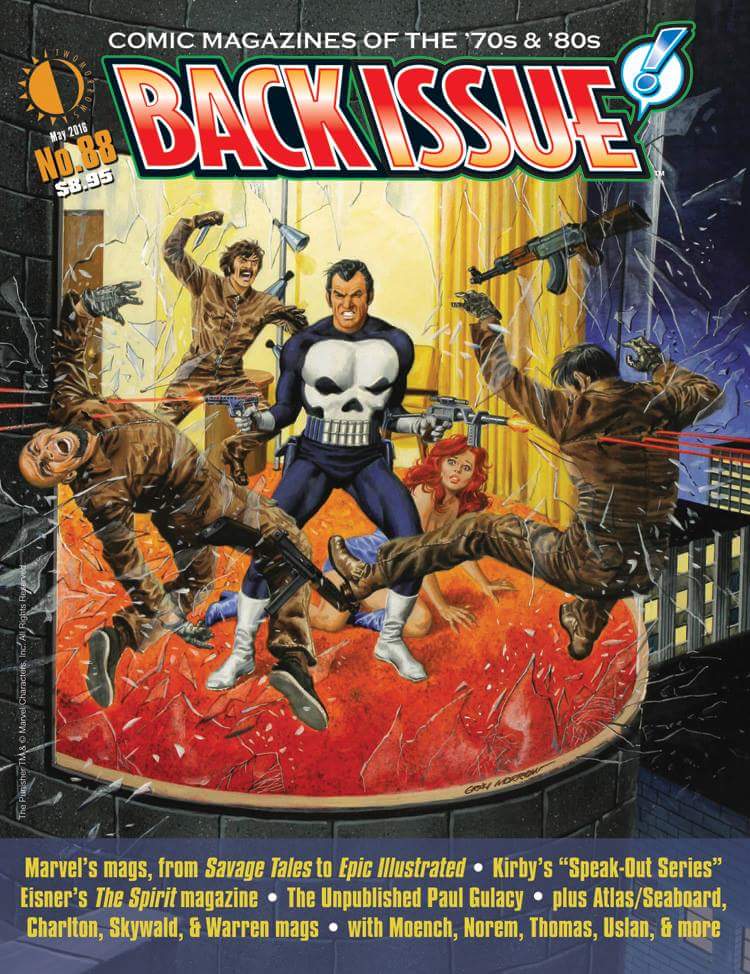 “When Archie left, I don’t think I was his favourite person. We had an editor named Rick Marshall. We wanted to do Epic Illustrated – at the time we called it Odyssey. Let’s just say that Rick wasn’t up to it. Actually, the president of the company commanded me to fire him because one day he made a $60,000 mistake. He sent out a book to the printer and printed three quarters of a million copies and he hadn’t gotten approval from the licensees. Yeah… oops. So all of those books went into the paper shredder and the president said I had to get rid of this guy. So I did and now I needed an editor and the more I thought about it, it had to be separate from the rest of the company, a full-time job and Stan and I were talking about it and Stan asked, ‘Who are we going to get?’ I said the best guy would be Goodwin, but I don’t think he would work for me.”

Given the friction between Shooter and Goodwin, it would take Stan Lee to intercede. Jim gave me more background into this fascinating aspect of his career:

“I said to Stan, ‘You hire him.’ You see, at this time, Stan really didn’t have any official responsibility at Marvel. His job was being Stan. He wasn’t even on the organizational chart. But he was Stan. If he told me to go join the Boy Scouts, then look for me in the woods! [*Laughs*] So we did it this way: Archie was told that he reported to him. We let him do all the creative work and I secretly did all the paperwork, all the baloney, bureaucratic crap.”

I then asked Jim what he felt was his greatest achievement at Marvel.

“Negotiating better deals for creators,” he answered. “It was a big significant thing that changed peoples’ lives for the better. It was the type of thing that Neal Adams always wanted. My very first day on the job was a perfect storm, the new Copyright Law of 1976 took effect. It required that everybody had to sign a document, which they had never had to do before. At the same time Neal Adams was trying to start a Creators’ Guild. He took one of my Work-For-Hire documents and wrote ‘If you sign this document, you are signing your life away’ on it. Printed it up all over the place: the lobby, in front of the elevators. He was going to start a strike against Marvel and I kept telling him, “Just give me a little while and I’m going to do all that. I just need a little time.” We remained the best of friends, and he and I were on the same page.  It was just that I was management and he was labour. We got along splendidly but I was on the inside and he was on the outside. The Guild fell apart and I was able to get all these things done. I think that was my biggest accomplishment.” 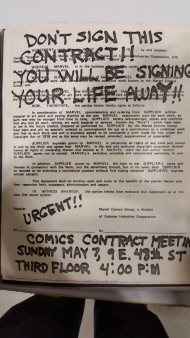 You know, I’ve done a lot of research into Jim Shooter’s career. My article on the 1984 Marvel Super Heroes Secret Wars series (BACK ISSUE #82, Aug. 2015) delves a lot into the decisions he made with that monumental series. I also had to read a lot about his management style for the other BACK ISSUE article coming out this month on Epic Illustrated. So a lot of the things that Jim told me weren’t new, but hearing him describe these things is a lot different than reading about them.

There’s no embellishment in Jim’s accounting of these things. They were pragmatically and honestly described, which I have to say is a reflection of simple hard work and a recognition of the way things needed to be done.

In fact, that’s probably the best way to describe Jim’s approach to things: just get it done.

I respect that. In the panel I moderated on the Secret Wars, Jim also remarked that one management technique he used in keeping all of the creators focused was to have them all mad at him, instead of at each other. As he described it, “These were grown men arguing in the hallways who was stronger, Thor or Colossus, but it was just easier to have them all mad at me.” Though it made Jim look unpopular, it’s difficult to argue with the expediency of his decision making process.

Jim actually congratulated me on my moderation of the Secret Wars Reunion Panel at the Toronto ComiCon in March. He said that it was the “best moderated panel he’d been to in twelve cons.”

Yeah, I know, I’m bragging. But, hey, Jim Shooter was the man who wrote Secret Wars, arguably one of the biggest selling Marvel comics series of all time. He also managed Marvel when it was probably at its zenith and to top it all off, the guy published his first comic story when he was just 13. So, yeah, I’m putting that in the win column.

All in all, Shooter struck me as a pragmatist. In my experience, pragmatists don’t get a lot of positive press. They know how to make hard calls. Sometimes they’re wrong but often they’re right and what’s more, they get to the heart of the matter straight away.

Jim’s old-school, to be sure, but it’s this type of thinking that we sometimes lack in today’s comic world. Things like continuity, character branding, and clarity of vision in what a comic should look and read like – and making sure everyone in the company had that vision too. Maybe it’s a little draconian but it gets the job done.

Because it’s not just about story-telling. It’s also about getting the job done and I can respect that.

I met former Marvel Comics editor-in-chief Jim Shooter… and I shut up, I listened and I learned.