INTERVIEW: Meredith Finch on ‘Rose’ and writing characters both feminine and strong 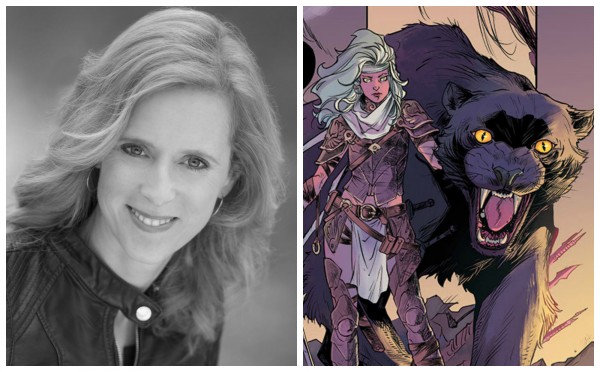 When is a writer’s time, her time?

That’s a good question for accomplished comics writer, Meredith Finch, to answer. Writer of Wonder Woman, Catwoman and other titles, Meredith is the mother of three boys and wife to DC Comics artist supreme, David Finch. But before we get to that question, we have to examine what got Meredith started writing comic books.

“My husband!” Meredith laughs. “Interestingly enough, when I first met Dave, I didn’t know much about comic books, and I didn’t know that comics existed in the form that they do. When we went on our first date, he had some comic books in the trunk of his car! So I got to see what he did.”

But when it comes to her writing, Meredith shared with me the transition from managing his art sales and business details, in addition to being a mum, to realizing her own literary ambitions.

“It got to a point when the kids were older that I started writing for myself,” she explains. “It was always something that I gravitated towards and always wanted to do but I never saw comics as the way that I would express myself, you know? David happened to come across some of the writing I’d been doing for myself and said enough was enough: ‘You’re good and you should be writing comics’ and that it was time that ‘you should be putting yourself out there’. He really pushed me to do it.”

Clearly, the first part of beginning a writing career is recognizing the value of writing for yourself. Writing is an act in which one has a personal desire to see a story through, be it fiction or otherwise. Writing is innate; born of inspiration and the need to create. If someone recognizes that the work has talent behind it, then that’s the time to start publishing. Meredith talked a little more about her process:

“When I write a comic, David is the very first person who reads it. He tells me what he likes and doesn’t like … and dialogue! Wow – I suck at grammar! If there’s a comma, you have David to thank for it! [laughs] When you’re doing your own book … you have to edit yourself! When I was writing Wonder Woman, there was a lot of editorial feedback. But when you’re doing your own book … well, with Rose, it’s different. That’s why I contracted Andy Schmidt from Comic Experience (@ComicExperience on Twitter). I think it’s really important that you get someone outside your perspective to edit your work. I’m really glad I did because Andy is excellent. Rose wouldn’t be as good as it is if it wasn’t for Andy.”

It’s apparent that professionals like Meredith’s work. Her work with Zenoscope and DC have shown that she has the chops for the work. It has paved the way for her latest original creation, Rose, a high-fantasy story inspired by her love of fantasy and skill in portraying female protagonists. Rose is scheduled to come out in April through Image Comics and is something that is getting a lot of anticipation, much of it relating to the art of Ig Guara.

“You can’t let me go without saying how good the art is in this book! Ig Guara – what he is doing on this book will put him into a different place in comic book art. He has just exploded! The way he is able to convey expressions and – Dave (Finch) reads comics for art and now he is such a big fan of Ig. He’s made this a visually beautiful book and is so different from what’s out there in comics right now.”

There has to be a balance of time in Meredith’s creative process. With juggling the demands of three boys, home life and helping to manage her husband’s career, I asked Meredith how she managed to find the time for the creative process to emerge.

“Well, it’s gotten easier as the kids have grown older,” she admits. “I get up – get the kids to school. David usually sleeps in later [laughs]. I clear my head at the gym and get focused. I write in blocks of time. It’s interrupted by making tea, making lunch, laundry and then getting the kids but I usually get about four pages done and by the time the kids get home, I’m done for the day. But I have a strict perspective on accomplishing a goal for that week.”

One would think that with all these distractions during the day, it would be difficult to maintain a creative sense of progress, but Finch has a clarity of vision about her storytelling that allows her to write with a clear focus and an astute awareness of her storytelling. I asked about her proclivity for female characters.

“Writing is about putting yourself on the page. Female characters come naturally to me, I guess. Emotionally, it’s a natural fit to get inside my characters’ heads and react the way I would. But I’ve had fun writing male characters as well. One of my first jobs was writing the Cowardly Lion in Tales of Oz but I was in Diana’s head for so long, I think it’s just natural for me to write female characters.”

I asked about the differences in writing the different female characters and how they related to Rose.

“Wonder Woman and Rose are totally different. As a writer, I tend to be a bit of a slow burn. It takes me a bit to really get into the direction of the story. I found the six-issue arc constraining. The nice thing about Rose is that I don’t have to limit myself to a six-issue arc; I’m going to tell the story in the time I want it to take. It’s very liberating and Rose gets stronger with every issue. That’s the nice thing about working with Image is that you get that sense of freedom and comfort in telling the story you want to.”

There’s a reflection of the value of time in this perspective as well. It isn’t just a measure of the time needed to create the character, but there is also a sense of value that it takes for a story to emerge. Time is expressed in different ways when it comes to creative process and storytelling and Meredith has found her measure in both of these ways.

“I’m really limited only by myself.”

What makes this experience better is the level of support that Image Comics has offered Meredith.

“I really couldn’t ask for them to be any more supportive. We had the cover of PREVIEWS, we’ve got posters in stores … I enjoyed my time at DC but I am equally thrilled to be working for Image. They’re doing so much that I feel so supported. It’s an amazing time.”

It was time to talk about the inspiration behind Rose.

“I have always loved fantasy fiction. It’s my comfort zone and my first exposure was from my grandmother who I was very close to and who I adored. She hooked me into Narnia – when I thought about a partner for Rose and her cat, I had the relationship from A Horse and His Boy in mind, but I didn’t think a horse would work so I went with a Khat. Then there was Anne McCaffrey, David Eddings and it got me thinking about investing in a long-term character, which is a feature that comics give you. You get to go on a long journey with a character and it’s better than reading a three-hundred-page novel and then you’re done. Comic characters exist for such a long time.”

“I’ve got notebooks from 2008 about this character. She’s been on my mind for such a long time and it’s where my heart and my passion lie.”

There other influences in Rose as well. Meredith went on to mention other fantasy authors like Tolkien but Eddings held a special place in her work.

“I really liked Eddings because his characters had such permanence. Both of these writers had their heroes go through long journeys. That’s the type of feel I want with Rose. But I also really want to draw on an authentic version of what it means to be a woman. Sometimes female comic characters, superheroes, are presented to be masculine in order to be strong. I didn’t want that for this character. wanted to show a representation of someone being feminine while being strong. She doesn’t have to pretend to be something she’s not or put down the men around her to be strong. She isn’t stepping on the backs of others around her. Especially as the mother of three boys: I don’t want my children to grow up in a world where a measure of strength is accomplished by stepping on others around them. That is very important to me and what I want to present in this book.

There’s earnestness and sincerity in talking with Meredith Finch about her work. There is also a sense of building strength, that in the fullness of time this story will have a decided impact upon its readers. Rose and her khat are characters borne out of personal significance and inspiration such that the only missing element to bring them to their fruition is time.

Time is a precious commodity but one that needs to be spent. A writer’s time is now; not later, not to be doled out in chunks of allowance, but to be taken and spent in order to achieve the end result. Balancing the various demands of our lives is a job that everyone experiences but creativity is a force that can’t be ignored. Eventually, it finds a way and quite simply, Meredith Finch’s time is now.

Which is the answer to the question I posed at the beginning of this interview. A writer’s time is this moment to create something of worth and significance, which Rose and Meredith’s other works undoubtedly are.