‘Missoula’ is a disturbing but important look at rape and justice

Share
Review of: Missoula: Rape and the Justice System in a College Town, Audible Audiobook

Sad and disturbing, 'Missoula: Rape and the Justice System in a College Town' is not an easy book to read. But it is an incredibly important one and should be read by all. 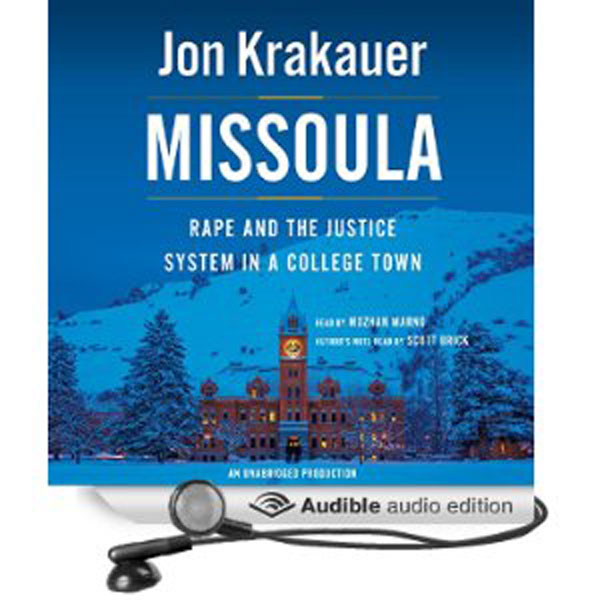 Jon Krakauer is a non-fiction writer whose is probably best known for his 1997 book Into Thin Air, which described his personal account of what was, until the last two years’ avalanches, the deadliest climbing season on Mount Everest (as a side note, this excellent book is being made into a movie, Everest, which is slated for release this fall).

Much controversy has swirled around Krakauer’s version of the events, but this brouhaha seemed only to have inured him to such criticism as he went on to write Under the Banner of Heaven, an account of a murder motivated from extreme fundamentalist religious belief and the historical roles of the Mormon church that led to such offshoots. It is from this vein that Krakauer’s most recent and timely book, Missoula: Rape and the Justice System in a College Town, flows.

Missoula (audiobook version superbly narrated by Moznan Marno and Scott Brick)  takes a thorough, meticulously-researched look at a series of rapes that occurred on the University of Montana campus from 2008 and 2012. However, even though the book’s own examined window of time ends in 2012, as recent as yesterday (May 30) a verdict was reached in the trial of 19-year-old Timothy Eugene Schwartz who was accused of raping a woman in her dorm room in February of 2014, highlighting the urgent timeliness of this book.

As with the Schwartz trial, a large number of the cases discussed in Missoula eventually made national news, and the public outcry over the perceived lack of response and justice from the town and University for the victims eventually led to an investigation by the Department of Justice. The events have had a long-term impact on the enrollment at the University and the town’s reputation. While some may criticize Krakauer for singling out this Montana town, the choice for his in-depth research stems from a personal connection and he points out many times in the book that these crimes are endemic to many colleges and universities.

Krakauer lays the cases open in their entirety – the backgrounds of the victims and their assailants, the histories of any proceeding relations between them, the actual rape itself, the decisions to report the crimes, the investigations and judicial proceedings, and the long term impacts to all involved. What is made abundantly clear is that rape is incredibly complex crime with far-reaching social, political and even economic effects from the resources needed to prosecute and prevent these assaults. It is not an easy book to read – much of it is filled with raw desperation and profound sadness, but it is an important book to read.

Here we are, well over a century after the publication of Tess of the d’Ubervilles, the classic story of a “fallen” woman, and we are still trapped in the prevailing view of rape being that of a stranger “jumping out of the bushes” and a woman “fighting to the death.” The legal defenses for the accused in Missoula successfully preyed upon these stereotypes time and again, emphasizing any prior cordial relations with the victim as an extenuation of anything that followed. And the victim’s response was typically scrutinized by all and often judged as lacking, i.e. if this were truly rape, she would have responded with aggressive, definitive actions such as X and Y, rather than “merely” Z.

Even as an educated woman I found stereotypes that I didn’t even know I had exposed. As Krakauer points out, do we dissect the behaviors and responses of victims of other crimes to this extent to determine if illegal acts were committed?  Do we say that if a mugging victim really wanted to keep her iPhone she wouldn’t have been using it out in the open on the street, and if she wanted it back, she would have chased after the thief until dropping from exhaustion? If we let someone enter our house once, have we granted them permission to break and enter at will in perpetuity? No, of course not, so why do we do view rape victims through these sorts of lenses?

As a parent of a daughter in college and another on her way there soon, the book struck another deep cord for me personally.  Both the victims and the assailants seemed painfully uneducated in the potential hazards of alcohol, e.g. how it affects biological processes, reasoning and judgment, interactions with other drugs, and what constitutes reasonable versus excessive versus frankly dangerous amounts of consumption. Very few seemed to have a working idea of what constituted a healthy interaction with good communication, and even sometimes lacked a fair bit of knowledge of human sexuality despite the apparent “openness” of their relationships. It was horrifying and sobering to hear the accused state they thought the victim was enjoying it because she “moaned,” or to describe how they wanted to re-enact something they had seen on internet porn. And it was heart-rending to hear the victims wonder over and over again whether or not they had actually been raped.

In the past, parents have often avoided talking to their children about touchy subjects such as relationships, sex, drugs, or alcohol out of embarrassment or social repression, but today’s parents may be avoiding it because we think they know all about these things already. But I would be willing to bet that what our sons and daughters are learning are without the important rules, best practices, and safety guidelines a loving parental communication would have.  So let’s try to teach our children well.

Sad and disturbing, 'Missoula: Rape and the Justice System in a College Town' is not an easy book to read. But it is an incredibly important one and should be read by all.
Facebook Comments