A day on the set of ‘The Murdoch Mysteries’: artistry, kindness & geekery abound

We all have our different geekdoms.

While mine tends to run the gamut of Star Trek, comics, and other typical fanboy interests, I also geek out on history. As a teacher of Canadian history and literature, I usually wind up talking about history on a daily basis and, much to my students’ joy, geeking and gushing over how great a history Canada has. So imagine how excited I was to be on the set of Canada’s most celebrated and authentic historical police drama – Murdoch Mysteries.

This show has been running since 2004, but 2008 saw the show gathering critical attention. In the summer of that year, Murdoch Mysteries was nominated for 14 Gemini Awards and won two. The show has been constantly renewed and, heading into its ninth season, is watched nightly on CBC by over 1.4 million viewers.

I had a chance to visit the set recently, and my visit was a special one as it also coincided with a visit from a group of very special and brave kids. Shaftesbury Productions arranged with Childhood Cancer Canada for young cancer survivors and patients to visit the set. The work that this organization does is critical in improving the lives of child cancer warriors by providing special opportunities for them. Imagine my surprise to discover that this bunch of kids ranging from ages 8 to 15 were all fans of the show. Given my familiarity with kids and Canadian history, that was a bit of a shocker!

The cast and crew were incredibly accommodating as they laid out the red carpet for these young fans. Every possible detail that could have been anticipated was provided for them. Lunch with the cast, a tour of the shop facilities and prop department, a walk-around of the set (led by Yannick Bisson himself in full Murdoch regalia) and a meet and greet with members of the cast. What was really sweet was the time Bisson took to pose for individual pictures with every kid as well as providing them with autographed photos and a loot bag of memorabilia for all. There was even a chance for the kids to observe a shoot in progress. They thought of everything with a measure of care that could only be described as magical.

It’s the attention to detail – this type of thinking that permeates the fabric of this show and it manifests itself in a variety of different ways. You are really struck by this as you walk around the outdoors set. The recreated storefronts and residences of late 19th century look truly authentic but it’s the tiny features like the names of the various businesses that are time specific and believable. What’s even funnier is the private jokes behind the names. While some are named after various crew members, there are others that have historical or contemporary Toronto-specific gags that either history nerds or Toronto natives would pick up on.

Sidewalks have cracks or chipped curbs and the masonry on the building fronts have to be touched to prove that they really aren’t made of stone. Everything, down to the most seemingly inconsequential detail like door handles are completely authentic. Looking behind doors to see ladders and stage frames was the only way to convince myself that they were fake.

The interior sets are no different. Every tool or piece of equipment that could be seen in the background of various shots is there for a purpose. One of the hallmarks of Murdoch Mysteries is its lead character’s ability to embrace new science and techniques and to extrapolate them into primitive forerunners of modern police and scientific methodology. As a result, there is a great deal of focused attention to these bits and pieces that make this show completely believably enjoyable for its fans. It was thoroughly entertaining to see the kids engrossed in the fake body parts, organs and surgical tools that make up part of Doctor Ogden’s and then Doctor Grace’s medical inventory!

I especially loved the technological paraphernalia that makes up the bulk of Murdoch’s scientific equipment. With historical visitors like Thomas Edison, Alexander Graham Bell and Nikola Tesla, you would imagine that William Murdoch needs to have access to the most sophisticated equipment he can lay his hands on. In this, the crew and prop masters have delivered all sorts of accurate-looking devices. Even the time clock in the constabulary offices that the officers and other employees use to punch their hours in is remarkably authentic.

Significant visitors to the show have included William Shatner who played the role of Mark Twain. The former prime minister of Canada, Stephen Harper made a guest appearance (as a bumbling police officer) as did Aaron Ashmore (Killjoys) and even noted CBC television journalist, Peter Mansbridge.

As Murdoch is a proponent of modern policing, things like fingerprinting (or ‘Finger-Marking’ as they refer to it on the show) rolls and photography appear as well. Core temperatures are used to indicate the time of death of a victim and other elements that show Murdoch Mysteries to be on the cutting edge of 1895 forensic techniques.

There’s enough for history geeks to get excited simply by the police techniques and other technological developments on the show, but science geeks can enjoy themselves as well. Murdoch is a scientist by heart but a police detective by trade. So the show does its best to use 1895 technology to justify the imaginative methods he develops. On one episode Murdoch asks a police officer for a photograph he needs for evidence. In order to get the image he needs right away, he asks the officer to superimpose a numbered grid over the picture and code each square with a colour. He transmits the numerical information via a telegraph and Murdoch is able to recreate the picture from that data. Essentially, Murdoch created a fax transmission. In fact, on the episode, they term it a ‘facsimile’.

What was really noticeable was how popular this show is with young people. When Thomas Craig (Inspector Brackenreid) and Jonny Harris (George Crabtree) emerged from the make-up room, the crowd of kids went wild. When Yannick Bisson took his place in the buffet line, my own ten year old girl became immediately starstruck and, normally a talkative kid, suddenly found herself tongue-tied. Murdoch Mysteries is a show that appeals to a variety of generations and explains why so many people watch it every night.

But it’s the care that really stands out. These people, cast and crew, donated an entire day of shooting for the pleasure of these kids. The care, the level of thought – if this is representative of the thoughtfulness of these people, then no wonder the show is a success.

As I said before, we all have our geekdoms: sci-fi, fantasy, comics, history, whatever. But the definition of geek is someone who knows a particular subject intimately well – to the point that every detail of their interest is cared for lovingly well. What was really endearing was to see to a group of history geeks think about another group of people as caringly as the cast and crew of Murdoch Mysteries did. This is a great show, crewed and acted by an amazing core of thoughtful and attentive people who just showed that they can include their fans, whatever their age, in their own sphere of geek. 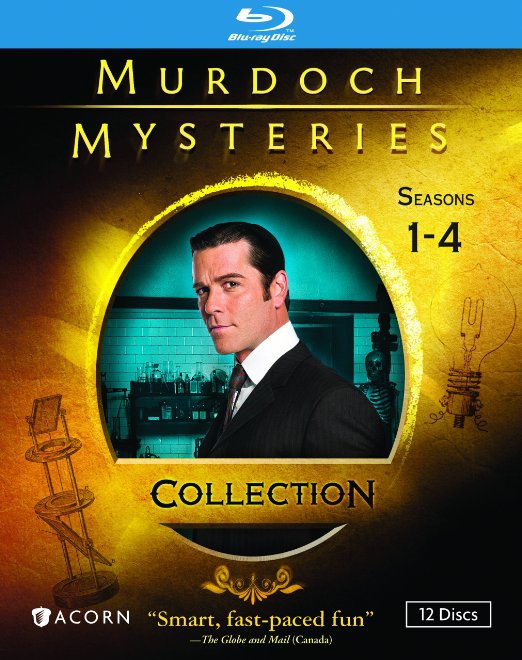