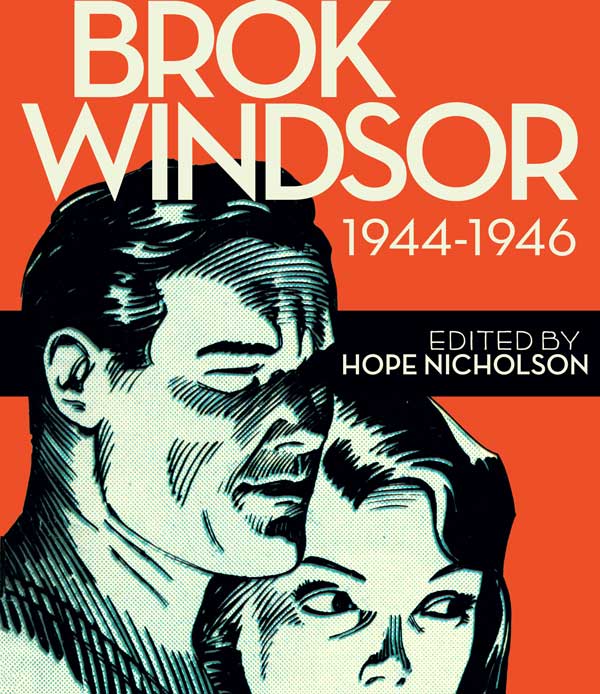 Why would Canadians want to read about an almost forgotten comic hero from the 1940’s? The answer to that question lies in the way that Canadians perceive themselves and the nature of super-heroism. In terms of appreciating this and other merits, Canadians can be fairly self-depreciating and modest, which makes Brok Windsor a truly interesting comic hero to read, but one that also allows us to better understand Canadian values.

A fairly unassuming and typical story for most Canadians, Brok Windsor’s creator, Jon Stables, was born in England and like so many Canadians, immigrated to Canada in his youth at the tender age of thirteen. Living in Winnipeg, he began illustration work for farming magazines and pulp-era magazines. He eventually made his way west to Vancouver to work in the shipyards at the beginning of the war. A few years later, he found work at Maple Leaf Publishing in Vancouver drawing illustrations for serials and in time worked his way up to become art director. Out of these humble origins, Brok Windsor was born.

Brok Windsor’s origin story isn’t very exciting. Instead of consuming a chemical formula or being exposed to radioactivity, we find Dr. Brok Windsor canoeing through Lake-of-the-Woods, a large lake that covers parts of Ontario, Manitoba and the U.S. As Windsor paddles through some strange mists, he discovers a hidden land separated from the world as he knew it, inhabited by strange animals and a race of giant Canadian aboriginals who were technologically years ahead of modern mankind. This appreciation of the ‘Great White North’ is true Canadian value. Canucks are intimately proud of their environment, and while there is so much of it, it is rarely taken for granted. It’s only fair that a Canadian superhero’s origin story would be, in some way, connected with this great Northern treasure.

An interesting environmental side-effect is Windsor’s sudden unexpected physical growth. After sleeping overnight on the shore of the island (the “islands-beyond-the-mists” or “Chaqua”), Brok wakes to discover that his clothes are in rags and that he has grown to almost seven feet in height. In this way, we can see one of the comparisons to Stables’ work in that it can be likened to Edgar Rice Burroughs’ stories if they had been set in Canada. Instead of space ships or some other technological contrivance, Brok arrives in this strange land via canoe. He doesn’t encounter an alien ally, but a representative of the First Nations and the first monster he faces is a giant blood-sucking fir tree. You can’t get any more Canadian than that.

But in true Canadian fashion, Brok also doesn’t come as a conqueror … he comes as an explorer. He is educated, skilled, polite and willing to submit to the customs of the land he visits – the ideal image of the Canadian traveling abroad. In fact, when he first meets Torgon, he is informed that strange canoes that touch the shores of this new land must be impounded. Despite discovering that if he continues to stay in this land his strange growth will lead to his death, Brok is willing to go along with the law.

However, in the course of his hike with Torgon, they are attacked by a hawkbat. Brok discovers that he has unnatural super-strength as he rushes to defend his new friend. After bandaging and caring for his wounded ally, they settle down for the night. In the morning, they awake and Brok discovers that not only is he taller, but the Chaqua’s night air has also had an invigorating effect on him. He is renewed, refreshed and brimming with energy. This is very similar to the environmental effect Mars has on Captain John Carter: its light gravity also has an effect on Carter’s strength, making him unnaturally strong as well.

It’s conceivable that Windsor’s popularity as a comic character was partly made possible by the Canadian government’s War Exchange Conservation Act which was passed in 1940. In order to offset a trade deficit, the Canadian government banned the importation of American comics, making characters like Johnny Canuck, Brok Windsor or Nelvana of the Northern Lights the primary superheroes of Canadian culture. Their brand of heroism was dedicated to themes that Canadians could relate to: defense of the environment, exploration of the Northern wilderness and defence of the commonwealth against Axis spies and insurgents.

Still, the success of these heroes was often overlooked and uncelebrated by comic standards. Average people knew of them but their status wasn’t as heralded as the appearance of their American counterparts. In comparison, American super heroism was filled with dramatically staged entrances. Granted, Canada’s superheroes had some of this as well – all comics do to some degree – but on a lesser scale, the circumstances deciding the nature of their appearance. Unlike the American credo of “life, liberty and the pursuit of happiness”, Canadian society espouses the idea of “peace, order and good government”, and so do its superheroes.

These are all Canadian values that would be reflective in Canadian history as well. Canadian heroes don’t often seek the spotlight, though when it finds them, they reluctantly take their place in it, making the cause their concern, rather than their own status. While you may say this is a characteristic of all heroes and not just Canadian ones, this isn’t a feature you often find in comic books.

There’s also a “Pan-Canadian” flavour to Brok Windsor’s exploits. Windsor’s adventures occur in Lake-Of-the-Woods, a location between Manitoba and Ontario. In a flash-back sequence he is seen walking downtown through the streets of Toronto. He speaks French, English as well as ancient languages of the First Nations that he studied extensively at school as a hobby. Diversity is a distinct feature of Canadian society and is recognized in the comic when Torgon exclaims “if only we could all learn each other’s languages, what a peaceful world it would be then …’

Torgon, in particular, is also a reflection of the greater respect for First Nations in this country. While not to say that relations between Canada’s government and its indigenous peoples is a sterling representation of aboriginal relations world-wide – Canada still has its fair share of injustices that have to receive restitution – Torgon is far less a typical caricature of Native North Americans than has been popularized in the past. Torgon is physically superior to his friend. He also has a better command of language (no broken English dialogue) and is generally more cultured. He is a true companion who has an equal voice in their adventures and is a refreshing change from the typical Native sidekick figure in comic literature.

On August 1st, a Kickstarter project was begun by editor and publisher Hope Nicholson  in an attempt to collect the issues of Better Comics that featured Brok Windsor’s adventures into a hardcover edition (you can find details of that project here). In comparison to her previous and very successful Kickstarter for Nelvana of the Northern Lights, Nicholson’s goals include an approximate page length of 150 and a print run under 2000 copies. An estimated publication date should be around summer 2015.

While any comic lover would enjoy reading this exciting and truly unique fantasy adventure, Canadians in particular need to read and celebrate this book for the historical awareness it possesses. After 1947, Brok Windsor’s adventures were discontinued. As the war ended and the War Exchange Conservation Act was eventually abolished, American comics began to seep back into the Canadian market. Without any protest or argument, Canada’s superheroes quietly faded away.

The likes of Batman, Superman and Wonder Woman took the places on the shelves and comic racks where Johnny Canuck, Brok Windsor and Nelvana once sat. But as of this writing, the Kickstarter project has been successfully funded so Canadians can once more enjoy these adventures and see even in the 1940’s that Canadian cultural similarities and values were present in the 1940’s as they are today. The modern roots of our culture once prominently sat in the minds of young Canadian comic-readers and this comic pays homage to those golden years of Canadian comic book history.