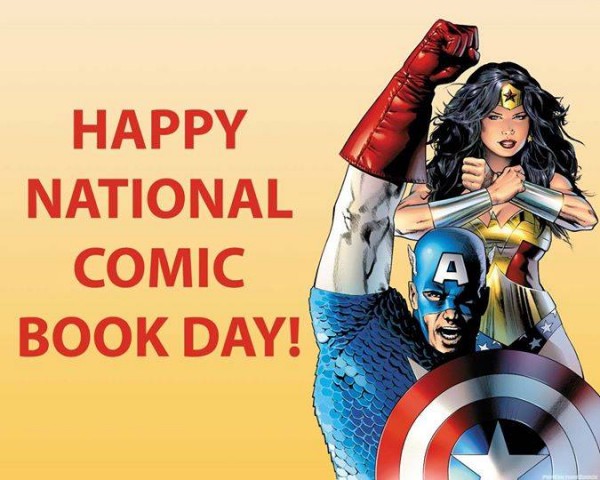 Hard as it may be to believe with the current explosion of interest in comics (thanks, movies!), when I was growing up it wasn’t easy to find non-fiction books about comics that helped to deepen one’s appreciation of the graphic storytelling form.

For new generations of eager comic newbies, on this National Comic Book Day I’d like to share ten books I’ve read that, in their different ways, have enriched both my knowledge and understanding of this marvelous medium. With the proliferation of similarly themed non-fiction books nowadays, I can’t claim with confidence that these are the “best” out there. But they are the ones that I’ve personally read and can recommend.

My favorite on this list excepting perhaps the Van Lente/Dunlavey book (see below). I read Understanding Comics in college and it absolutely blew my mind, both in the way that it uses the comic book format for a non-fiction book and for McCloud’s erudition and depth of understanding. Really opened my eyes, so to speak.

Comics and Sequential Art, Will Eisner

There’s a reason that the most prestigious award in the comic industry is called the Eisner Award. Compiled from materials that Eisner used for his class at the School of Visual Arts in New York, Comics and Sequential Art is directed more at those who seek to create comics but there is still much that general readers can take away from it as well. It’s also not quite as cohesive as McCloud’s Understanding Comics, but that’s probably because it was compiled using the aforementioned course materials. This is still a book of considerable historical note.

I don’t know how many times I checked this book out from my local public library when I was in elementary school. It sparked my interest in comics just as much as any other single source I can pinpoint. It’s an old one, published back in 1984, so in some ways it’s probably outdated, but the principles of dynamic visual representation that Lee and Buscema talk about in this book helped make Marvel what it is today. You really don’t have to be an aspiring comic creator at all to enjoy this one. It’s just really fun to thumb through, or at least that’s how I remember it.

Like McCloud’s book, Van Lente & Dunlavey’s book uses the comic form for a non-fiction subject (something I’d like to see more of, and not just to cover the subject of comics). This is a vastly more entertaining, but equally edifying, history of comics than some other books out there that seek to tell the same history. Reading this alongside McCloud’s book is like an entire course on comics unto itself; this one covers the history, McCloud’s book covers the visual and literary theory.

With his characteristically grandiose prose, comic book writer Grant Morrison (The Invisibles, Animal Man, Nameless) also seeks to cover comic book history but in a way that’s more autobiographical and sociological, even drawing from his lifelong interest in magic and the occult. I wouldn’t recommend this as a starting point to learn about the history of the medium but as a supplement to the other books, it’s a fascinating (if occasionally frustrating) look at comics from the eyes of one of the industry’s most iconoclastic lunatics.

This one’s as old as the Stan Lee/John Buscema book above, and while many books about manga – perhaps better ones – have appeared since then, I’m choosing this one for nostalgic reasons. I’d already been reading Japanese manga translated into Korean since early childhood, thinking they were native Korean comics, but this was the book that made me start thinking of Japanese comics as a distinct categorical entity separate from both Korean comics (called manhwa in Korean) and American comics.

This book was a present from my mom many years ago and I tore through it in just a few days. It covers the history of the venerable cousin to comic books: the comic strip. You’ll learn all about the classics like Little Nemo, The Adventures of Tintin, Katzenjammer Kids and of course my personal sentimental favorite, Peanuts.  It doesn’t seem to be in print anymore, but rest assured it’s not for quality reasons and you can still find copies on sale from individual sellers on Amazon.

Graphic Novels: Everything You Need to Know, Paul Gravett

I picked this one up in the Forbidden Planet store in Edinburgh years ago and it’s kind of a cross between history and an exhaustive best-of list covering everything from Adrian Tomine’s Optic Nerve to Frank Miller’s The Dark Knight Returns.  There are enough recommendations in this book to probably last most readers an entire lifetime. A good one to have on your coffee table.

I bought this one together with the Gravett book above. It’s similar but much smaller, slimmer and cheaper, with less text. An alternative for people who just want a handy list of recommended titles to keep on their bookshelf.

This annual volume never ceases to amaze me, and all the more so because it was started by one guy. This isn’t just a price guide – it’s a dizzying at-a-glance look at the entire catalog of comic book publishing throughout the medium’s history. More a book for casual browsing than actual reading, no matter how rabid a fan of comics you are this is a book that will make you and your comic collection feel small indeed. Sigh… so many comics, so little time.