Pandemic movies to watch while stuck in coronavirus lockdown

Often during times of uncertainty people seek the comfort of knowing that those individuals in places of power have the stability, competence, and expertise needed to lead us back toward a calmer atmosphere.

And when those people are absolute, humiliating failures more interested in bragging about stock numbers and denying a growing illness because it might hurt them politically…. er, well, I digress – we seek comfort in media that feels both relevant to our current situation yet far enough removed that it allows us to escape.

As part of our effort to improve lives through pop culture, we at Pop Mythology would like to offer the millions of people wisely deciding to stay at home—instead of possibly contributing to the spread of a very real virus that was always real and never, not at any time, a hoax (sigh…)—this list of films that are both resonant and, at times, oddly comforting.

At their base any piece of zombie media, from The Walking Dead to the Resident Evil series, is about the consequences of a pandemic. After all, people normally don’t shamble about eating the brains of other people. At least not outside of Florida. While zombie movies have become a subgenre within themselves ranging from straight ahead horror to self-aware meta-humor, some lean more heavily into their viral roots than others.

Night of the Living Dead

George A. Romero defined the zombie genre with this undisputed classic and created the tradition of zombies as proxy for other societal ills. Following the events of a single night, and with the then revolutionary concept of a calm and skilled black protagonist, Night of the Living Dead is as potent in both its scares and its social satire today as it was when debuting more than fifty years ago.

Dawn of the Dead

In his follow-up, George A. Romero built upon the legacy of his previous zombie film by expanding in both scale and gore. While Dawn tells a larger story, its satire is no less precise in focusing on the trappings of a materialistic culture and the consequences when people place value in things over lives, like, say, issuing press statements focused on the stock market instead of public health… (I need to stop doing that…)

Years after Romero’s series had been copied, remade, and had viscera replace any social commentary, Danny Boyle’s 28 Days Later breathed new life into the undead by adding one revolutionary element: zombies can run. With production beginning just before the events of September 11th, 2001, 28 Days tapped directly into the zeitgeist of fear and panic, much of which remains even today, and ushered in a resurgence of zombie media, until any humanist and political allegories were again removed for pure gore.

Shaun of the Dead 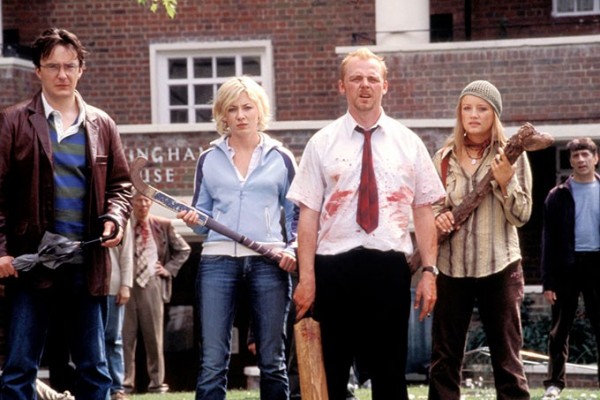 As with the genre itself, eventually one can only handle so many death and depression. Luckily Edgar Wright, along with his Spaced co-stars Simon Pegg and Nick Frost, created a pitch-perfect parody of the genre in Shaun of the Dead. While obviously not as terrifying as others, Shaun manages to deliver an emotional wallop in the most hilarious way.

More braaaaaains! Honorable Mentions: Personally I also really enjoyed Zombieland for its cleverness and theme of finding happiness in smaller moments, but for a different perspective on the zombie genre seek out the independent comedy Wasted Away (originally and better titled Aaah! Zombies!) for a flawed yet creative twist on the genre. As well, World War Z is fitting to current events, but more on that later.

For many people this is the patient zero of pandemic films. Adapted from a book by Michael Crichton, author of Jurassic Park and medical school roommate of the son of my parents’ friends which, in the words of Darth Helmet makes Crichton and I “absolutely nothing,” Andromeda Strain finds humanity rushing against the spread of a literal alien pathogen. Although in this case the fictional American government was somewhat prepared for the crisis… yeah…

The film succeeds most by creating a threat that is both terrifying and scientifically plausible as Crichton did, after all, attend medical school with the son of my parents’ friends.

Beginning with a shipping container loaded with dead illegal immigrant and an aggressive form of H5N1, South Korean film The Flu follows the quick spread of a virus through the densely populated metropolitan area of Bundang, a city just outside of Seoul. Touching on themes of unknown carriers, incompetent leadership, denial, and grabs of authoritarian control during a time of crisis, the film’s disaster movie formula feels strikingly prescient. The film feels like a warning, playing out as an extreme of what those of us who live in metropolitan areas outside of Seoul could have experienced. Thankfully, in the real world, quick efforts of political and medical leaders in South Korea have kept the current situation from spiraling toward disaster.

Not a traditional pandemic movie, Children of Men is a landmark of post-2000 science fiction cinema. Following the spread of an unknown virus which causes infertility, Alfonso Cuaron captures the desperation of the last generation of humanity through intense, tightly filmed camera work and images of empty, lifeless cities. The car chase scene alone remains of the most awe-inducing moments I have ever seen in film. With the economy gone, borders closed, and all semblance of civilized life long since forgotten, Children of Men offers a soul-crushing look at how quickly society can collapse once panic and fear take control. And yet, things are never as bleak as they seem, leaving the viewer with the idea that even in the worst of times, if we work together, we can find our way,

While World War Z may be more applicable to current events, 12 Monkeys is a more entertaining film which also stars Brad Pitt, plus this one got his first Oscar nomination. Sure, the movie uses time travel in an attempt to foil an eco-terrorist from unleashing a deadly plague that wipes out most of humanity, but Terry Gilliam’s unique sense of aesthetics and storytelling makes 12 Monkeys is a wilder experience than a by-the-number zombie flick where the zombies are just zombies. I mean, sure, World War Z is fine, and much more directly related to global pandemics, but 12 Monkeys is just bonkers and a film that demands a second viewing.  I mean, with things going the way they are, we’re pretty much one generation away from living in a Terry Gilliam-esque dystopia. Might as well get a feel for it…

Serving as a sort of update to Andromeda Strain, Outbreak is a mainstream Hollywood depiction of the efforts to stop a global pandemic, complete with the types of selfless heroics that are common in film but very rare, and even more rarely rewarded, in real life. A quick pace and outstanding cast led by Dustin Hoffman, Renee Russo, Morgan Freeman, and an exceptional performance by Cuba Gooding Jr (speaking of rarely rewarded), keeps the film entertaining. Never too divorced from science to lose all sense but never too devoted to science to lose comprehension, and never too blatantly heroic as to feel saccharine but never too bleak as to become nihilistic, Outbreak is well crafted middle-of-the-road entertainment. It’s the moderate choice, if you will, not perfect but generally inoffensive, and better than what we currently have.

To date, Steven Soderbergh’s 2011 thriller is the definitive pandemic film. An absolute master of filmmaking, Soderbergh uses one of the best casts ever assembled at the time to paint a landscape into every aspect of the human response to a contagious disease. Through strategic placement of characters Contagion captures the global and personal effects, from the laboratory to the grocery store. The film uses the same in-the-moment realism to depict clinically clean scientific development as it does the threatening, terrifying experiences of people living within the infection zone. Lauded for its accuracy, Contagion feels utterly real in every way. Best of all, Contagion ignores modern anti-intellectualism and paranoia and, even without ever passing judgment, places its sympathies on the people devoted to doing the right thing, without regard to themselves, and not with the fear-mongerers peddling denial and pseudoscience for personal or economic gain (people like… oh we all know who). Contagion‘s message is one that more people in leadership positions should follow: Doctors and scientists may not be perfect, but there is a reason they are experts. Listen to them.

If only… ugh… digressing again…

Well, distressing as current events may be, remember that chances of infection are still low, and fatality rates even lower. Hope you enjoy our recommendations and others. Personally I powered through all of Harley Quinn, season one, in a day (waaaaay better than Birds of Prey), re-watched the Lords of the Rings trilogy, and have used the time to write a lot, settle into my new apartment, and read. Remember to stay safe, wash your hands, and take care of those who can’t take care of themselves. We’re all in this together.

(…I can’t hold this in anymore! I don’t care if it’s a public option, Medicare for all, socialized medicine, whatever the hell you wanna call it, but you’re telling me that damn near every country can afford a national health system and the “greatest nation God ever granted to the world” can’t provide healthcare to all its citizens. What type of crap is… aaaaaaaaaah!)

Jess Kroll is a novelist and university professor born in Honolulu, Hawaii, and based in Daegu, South Korea. He has been writing film reviews since 2004 and has been exclusive to Pop Mythology since 2012. His novels include 'Land of Smiles' from Monsoon Books and young adult series 'The One' and 'Werewolf Council' from Epic Press.
@jmskroll
Copyright © Pop Mythology 2022, All Rights Reserved