This year’s buzz is all about The Hunger Games: Catching Fire, Kick-Ass 2 and Captain America: Winter Soldier , panels for Game of Thrones and Community, and the long awaited Ender’s Game adaptation and Godzilla relaunch. Comic Con has become a major promotional point for blockbuster films and a symbol for the acceptance of geek culture in mainstream society. And it’s also completely ruined what was once a great and wondrous event for the few who genuinely wished to attend.

Growing up as an aspiring comic book artist, Comic Con was like Mecca: a distant, holy land where once a year the pilgrims of sequential art would gather together free to express our worship in peace and unity without the judgment and prying eyes of those who could never understand our faith. We who grew up when comic books were not cool remember having to keep such passions private, hiding our carefully rendered splash page finishes behind our hand while seated in the back of the lunch room, and when caught coming out of the comics shop on Tuesday afternoon with logo-sporting bag in hand by the gang of skaters hanging outside the 7-11 next door reluctantly admitting, “Yeah, I still read Spider-Man.”

We remember suffering in the shadows of our hometowns, so distant from southern California, examining the pictures of last year’s Con with its tables of beloved creators posing with fans and smiling booth babes dressed like Catwoman and Jean Grey (never quite as hot, but still hot and best of all, real) scrolling down next year’s list of attending luminaries – Stan Lee, Peter David, Todd MacFarlane, John Byrne, Chris Claremont, Jim Lee – and thinking, “If only I had the money to fly to San Diego and didn’t have stupid school next week, I could meet those guys. I could get their autograph, a sketch. I could talk to them about upward lighting techniques, lead darkness and panel pacing. I could get their advice on some of my own drawings. Maybe, just maybe, I could be hired on the spot for their next X-Men or Batman title and then next year, I could be at that table with the smiling booth babes dressed as my characters and legions of fans asking for my signature across the cover of my first issue and laughing with the other artists who I’d call Todd and John and Jim.”

Yeah, Comic Con, was a dream.

I even remember a high school friend who never read comics getting to attend because her boyfriend’s friend (Michael Turner) needed a booth babe and thinking, “You don’t deserve it!”

But all of that has changed. The mainstreaming of geek culture means that the vast majority within the throng of fans flocking to San Diego this weekend isn’t that which spent years pretending that we couldn’t recite the name and power of every Avenger. They don’t know who Norrin Radd and Marc Specter are or why Franklin Richards is such an important part of the Marvel Universe. Hell, they aren’t even there for the comics!

The paradise we grew up longing for is lost to promotional events and paparazzi cameras. It’s not our institute of higher learning or Fortress of Collective Solitude anymore. Worst of all, now that we’re grown up, have an income, and can take the time off to attend, between price and availability, it’s impossible to get a ticket. I’ve wanted to see Comic Con my entire life! Now people who think Wolverine is supposed to be tall get to saunter into Shangri-La before I do? It’s an outrage! 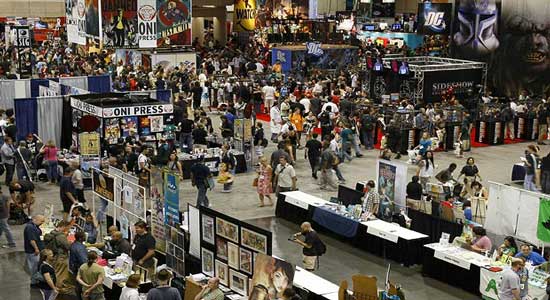 I can’t blame movie studios for making Comic Con into Cannes for the geek sect (minus the actual, you know, screenings). If you’re going to invest hundreds of millions of dollars in a blockbuster property than you have to promote it to the potential audience and a big part of that potential audience attends Comic Con. It makes simple economic sense. However, bringing those hundred-million dollar blockbusters to Comic Con changes the audience in attendance, and pretty soon those of us who should be in the film’s built-in fanbase are shut out by those who just want to see movie stars. It’s like standing in line for hours to see a band you’ve followed through years in the underground scene only to have a hundred people who loved the one song that made it to radio cut in front of you at the door. I’m not saying they aren’t genuine fans; I’m saying that they won’t appreciate as much as others would.

It’s hard to look at the Comic Con coverage and not feel like some small part of comic book culture is gone now. This refuge of pure geekdom, which only the most fanatical were willing to spend their money and time to attend, is no more – at least not the way it used to be. Even if it was only a fantasy to begin with, it gave us hope, once.

Of course, if given a chance to go to Comic Con, I still totally would. I may not read comics much anymore, but c’mon, it’s Comic Con. It’s like nirvana of everything awesome. Plus, I could see Jennifer Lawrence.