Prepare to get lost in ‘The Woods,’ an engaging sci-fi horror adventure

James Tynion IV and Michael Dialynas’  The Woods Vol. 1: The Arrow opens in Bay Point Preparatory High School, in Milwaukee, Wisconsin. In the first few pages, we are introduced to the six main characters via name and current emotional state as they go about their daily lives. What starts as a normal day for these characters, however, quickly turns into a struggle for survival and control as the whole school is suddenly transported to an alien planet in a flash of light and a rumble of earth. Over 500 people are suddenly left with no running water, a limited supply of food, a severely unprepared faculty, and a giant stone arrow in the middle of an unknown wood.

One of the students, Adrian, sees this arrow and is immediately enthralled. He propositions five individuals who have abilities he thinks will be useful for survival, and together they leave the school to follow the arrow and figure out why they were brought to the woods. As a result of this split, two stories happen simultaneously. The first is the battle between the student council president and the principal for control of the school and its inhabitants; a battle that becomes violent rather quickly. The second is the battle between Adrian’s group and the woods’ inhabitants as they search for meaning in this new world. 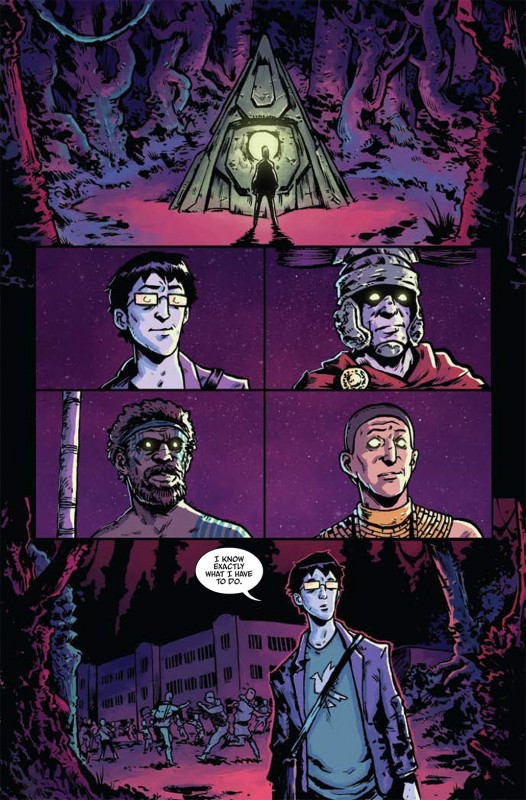 The writer of The Woods is James Tynion IV, known for his work on Batman Eternal, Red Hood and the Outlaws, and The Eighth Seal. As expected with the promise of aliens and violence, the plot of this comic moves rather quickly and lives up to both its sci-fi and horror classifications. However, despite the death and destruction, the primary focus of this story seems to be the lives of teenagers.
Like all teenagers, these kids have rather mundane problems before entering the woods, and these problems still define them after. They are the typical problems of teenagers, too: some of them are uncertain of their future, some are desperately searching for approval, some are entirely certain that they have the world figured out. All of these ideas are challenged in the woods, and it is the characters’ responses to these challenges, more so than the mystery of the arrow, that makes you root for them to succeed. We have all been teenagers and tried to find our way in the world. Despite their extraordinary circumstances, the characters are relatable for exactly this reason.
The art for this comic is done by Michael Dialynas, illustrator for titles like Amala’s Blade, Superior Spider-Man Team Up Session #1, and the bilingual Trinkets. While the setting and character designs manage to turn the mundaneness of the everyday world into something more sinister, the real stars of Dialynas’ illustrations are the monsters that inhabit the alien planet. Each new species is different from the last and precisely detailed, not just in physical appearance but also in their movement and mannerisms. Dialynas takes the most intimidating aspects of Earth’s mammals and insects: fur, large teeth, multiple limbs and eyes, and combines them into the nightmarish hybrids that stalk the woods.​ It is both exciting and disturbing to realize that a new monster could be waiting behind every tree or rock that lines the characters’ paths. Sometimes, the excitement may even outweigh your concerns for the characters. 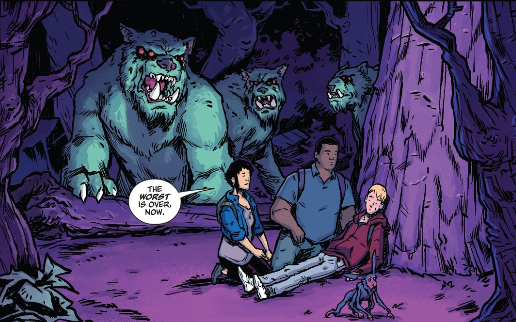 The Woods is a comic that manages to inject humor and humanity even into its storyline of horror. The main cast all have realistic if often stereotypical faults and virtues, and react with all the selfish, headstrong honesty of teenagers. Despite its seeming to be aimed at teens with its high school drama and a lack of gore despite its violence, this is a title that adults can enjoy as well. The darkness and uncertainty of the woods coupled with the determination of the characters to do something other than wait around for tragedy to strike the school keeps a steady tension in the story and an anxiousness in the reader. This is only compounded by the monstrous illustrations and the mystery of the arrow.
The first arc of this series is one not to be missed. The story so far has only gotten better over time, so be sure to read it as it grows.
Share

Jessica is a Midwestern girl living in the outskirts of Seoul. In between teaching classes and meeting friends, she likes movies, traveling, and fighting her cat for the warm spot in front of the space heater.