Despite the in-jokes and Easter eggs, theatregoers who've never watched a single Star Trek episode or film will still enjoy this geeky and different yet still moving and recognizable rendition of a holiday classic. 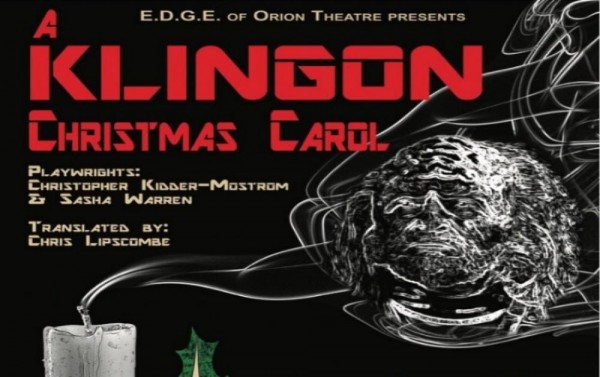 What do most people think of when they hear A Christmas Carol?  Some people think of snow and soot-covered 1840s London. Others imagine the divine intervention of helpful yet stern and sometimes frightening spirits trying to save the soul of a lonely, cynical, and selfish old man. Many of us probably remember getting a 2-hour reprieve to watch an old movie during the last school day before winter vacation started.  Regardless of our initial memory starting points, author Charles Dickens’ quaint holiday novella from the mid-19th century continues to both remind and inspire us to acknowledge our past wrongs, try to better ourselves in the present, and hopefully set a better example for those who follow us into the future.

A Christmas Carol has been read, watched, and performed countless times, but the EDGE of Orion’s stage production of A Klingon Christmas Carol (written by Christopher Kidder-Mostrom & Sasha Warren and translated by Chris Lipscombe) offers an incredibly different and geeky yet still wonderfully fitting rendition of this beloved holiday parable.  The show merges Dickens with, of all things, Star Trek and they succeed in making a haunting yet hopeful and emotionally resonant retelling of this classic yarn that speaks as much about us, the audience, as it does for about of its fictional alien characters.

Why Star Trek? Because Star Trek is about possibility. Just like A Christmas Carol itself.  Forget the spaceships, the aliens, the explosions, etc.  As cheesy as it can be at times, Star Trek has always been, at its heart, about a sincere hope for a better future.  The best episodes were always allegories for important social issues and that has not changed. This concept resonated with audiences 50 years ago and it continues to do so now.

A Klingon Christmas Carol is the essentially the same story that we’re used to but it takes place on the Klingon world of Q’onoS (pronounced Kronos, for you non-Star Trek nerds).  The characters are members of the Klingon race—a staple of Star Trek lore that has gone through a few different incarnations over the past half century of Star Trek.  Featured throughout the numerous TV series and films, Klingons have been a stand-in for current and post Cold War enemies, a throwback to World War II era imperialist Japanese forces, and more recently even an allegory for modern day nationalism. Klingons are synonymous with Star Trek so such a rich source material is a fine wellspring of potentially poignant drama in a sci-fi retelling of a classic and socially conscious tale.

The Scrooge character here (SQuja’ in Klingon), played by Tony Bunnell, is a very flawed individual who has failed to live up to the demands of his warrior/honor-bound culture, and his struggle is easily the most honest and “human” of the characters in the play. We also feel the frustration of QachIt (Cratchit), played by Matt Calhoun, with the demands put upon him and the fear he has for his family’s future. The irrepressible spirit of Vred (Fred), played by Justin Blankenship, and his faith in the redeemability of his uncle really shines through. And the Vulcan narrator, played by Elise Soeder, made me feel like I was an actual delegate in some 23rd century United Federation of Planets seminar and that I was really watching an intelligent yet emotionally suppressed alien doing her best to explain a heart-driven story.

The cast is superb and director John Gleason Teske has done a terrific job.  All the main characters from the familiar story are present and identifiable.  While the actors are all speaking the fictional (yet actually functional) language of Klingon, English subtitles are displayed on a screen above the stage. They even begin as written Klingon and then quickly morphy to English as the lines are spoken, a very nice touch that echoes the depiction of Klingon language as seen in the Star Trek films. None of this detracts from the viewing experience, and in the case of Star Trek fans, will only enhance it. Fans will also notice the presence of familiar props and weapons, all of which appear to have been handmade instead of being ordered off the Internet—another nice touch.

Nothing is lost in this translation and it tells an equal, if unique, version of the story we are accustomed to. In this version, honor is as much a currency as is money in the original version. That may sound a bit strange but it totally works within the confines of the tale. Klingons don’t think in the same way as 21st century (or 19th century) humans do yet the same elements of altruism, connection, and, yes, humanity are present in a very Klingon way, as are the themes of regret, hope, and redemption.

As far as production value is concerned, the sets are minimalist but that keeps your attention on the actors. The costumes and props are immersive and some of the lighting, especially towards the end, is fantastic.

A Klingon Christmas Carol was obviously written with Star Trek fans in mind, but I think every viewer will take away something meaningful from it. This is still A Christmas Carol, after all.  Despite all the in-jokes and Easter eggs, someone who has never watched a single Star Trek episode or film would still enjoy this. There are moments of humor that do feel like fan service and may be lost on casual theatregoers, but the soul of the play is genuine and easily absorbed.  I am very happy to have seen this performance and would encourage anyone who loves Star Trek, Charles Dickens, Christmas, or just wants to watch a surprisingly emotional play from unexpected source material to go check it out.

Despite the in-jokes and Easter eggs, theatregoers who've never watched a single Star Trek episode or film will still enjoy this geeky and different yet still moving and recognizable rendition of a holiday classic.
Facebook Comments

Justin Ivie is a former social worker from Mississippi, USA.  He currently lives and works in Chicago, IL, where is also active in the stand-up comedy community.