Champions #24 had every chance to become an after-school special or a “very special issue of Champions.” Instead it is a thoughtful, touching and relevant story that is worth picking up. The story written by Jim Zub, who took over from the formidable Mark Waid, takes a fresh look at the issue of gun violence in American schools. Zub makes the story meaningful without becoming preachy.

As the team is helping to repair a section of New York that needs help, Miles Morales, aka Spider-Man, receives a text alerting him that their has been shooting at his high school the Brooklyn Visions Academy. Making matters worse, one of Miles’ friends, Fabio, was shot in the attack and was rushed to the hospital. Some people were killed in the shooting, including the shooter.  It’s truly a shame that the preceding paragraph has become all too familiar to those of us living in the United States.

The issue stand outs, however, because it effectively shows Miles’ struggles after the shooting. Not only does he have survivors guilt, but hero’s guilt. Even with his powers, it’s made apparent to him that he couldn’t have stopped what happened. In one of the more touching moments, Kamala Khan, AKA Marvel Girl, gives Miles a much needed pep talk and helps him understands that even as a hero he, and all of the hero set, have limitations. 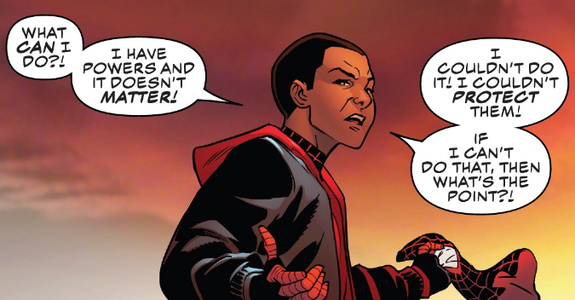 Essentially, that’s how the issue ends. We do see Fabio get released from the hospital, but other than that there is no great resolution. That may seem unfulfilling, but in this case it isn’t. It is a more realistic ending than most comics. The heroes don’t always win. Just like the real issue of gun violence, especially in our schools, there are no easy answers, and often just an empty feeling of uselessness.

Conversely, that’s what makes Champions #24 so good. It’s as strong of a portrayal of a school shooting as you are going to see. It doesn’t rely on the shock of the violence and it doesn’t try and offer trite solutions. It uses some of the best teenage characters in the Marvel Universe and uses them to confront a very real issue. If nothing else, it offers a story that can be a useful way to start the conversation about gun violence.