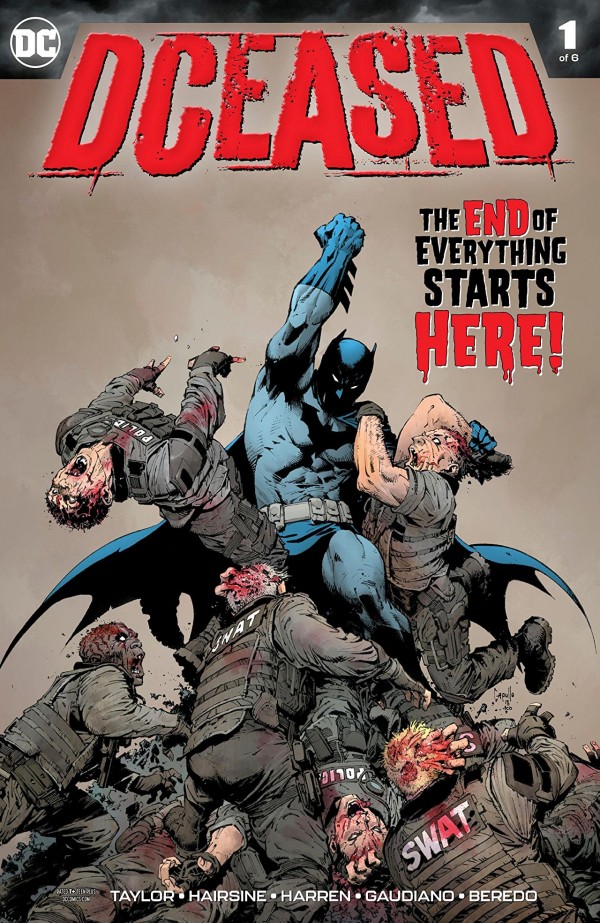 I fully expected the usual story and tenor when I picked up DCeased #1. The cover has Batman fighting off zombified police officers and the title pretty much suggests yet another dark, brooding Batman title with a little zombie juice thrown in to pick up on a bit of the pop culture zeitgeist.

My expectations weren’t met. Instead, I was surprised. Oh, it’s dark; I mean the title is Deceased after all. It is also a take on the zombie apocalypse, but the twist that Tom Taylor brings to the origins of the outbreak is fresh and unnerving. I won’t go into complete detail, but suffice it to say that if events were to come to pass as they do in the book, you’d be doomed reading this review.

It also doesn’t feel like a Batman book, at least not completely. The cover (and the variants) focus on the Dark Knight, but at least for this first issue, DCeased is much more of a Justice League story than anything else. It starts with the League seemingly defeating one of its greatest foes, Darkseid. As he departs, however, the ruler of Apokolips, leaves satisfied that his true mission is accomplished. 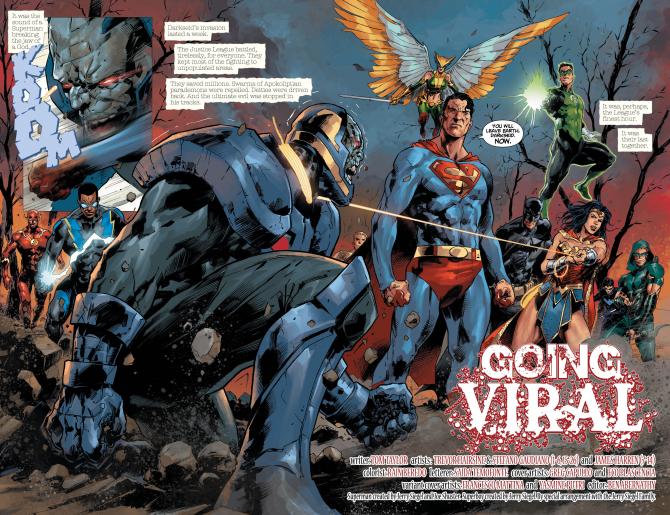 The rest of the the issue is divided up into three distinct acts, each centered around three different characters from the league. Act One is with Cyborg and the creation of the threat. A very clever turn in the origin story is that the earthly apocalypse is created on Apokolips. Act Two involves Superman and the revelation of what exactly is happening. He saves his family and Damian Wayne from contamination.

It isn’t until the final act that we see Batman and the true consequences of the outbreak. Batman manages to stop the threat from entering Wayne Manor, but not before it’s too late. The final scene is of Batman fighting Nightwing and Robin who are infected. We are left with Batman being overwhelmed by his former proteges, ordering Alfred to flee.

Sure, it’s still dark and I’m sure, if Batman survives (now that would be a surprise!), he will do some first class brooding. DCeased, however, isn’t the normal, gritty, dark, dystopian kind of set up. There isn’t, at least at first glance, an evil or ancient threat that confirms how screwed up the world really is and always was. If it gets revealed that it is some great plot, that will be a disappointment. Right now, even though the catalyst for the outbreak comes from Darkseid, the true destruction comes from within. Our most ubiquitous habits and behaviors are the true culprits that bring devastation. Taylor and artists Trevor Hairsine, James Harren, and Stefano Gaudino have started a story that promises to be a fresh take not just on zombies, but a more nuanced take on superheroes.