REVIEW: ‘Doctor Strange: The Best Defense’ #1 raises the stakes for the Defenders 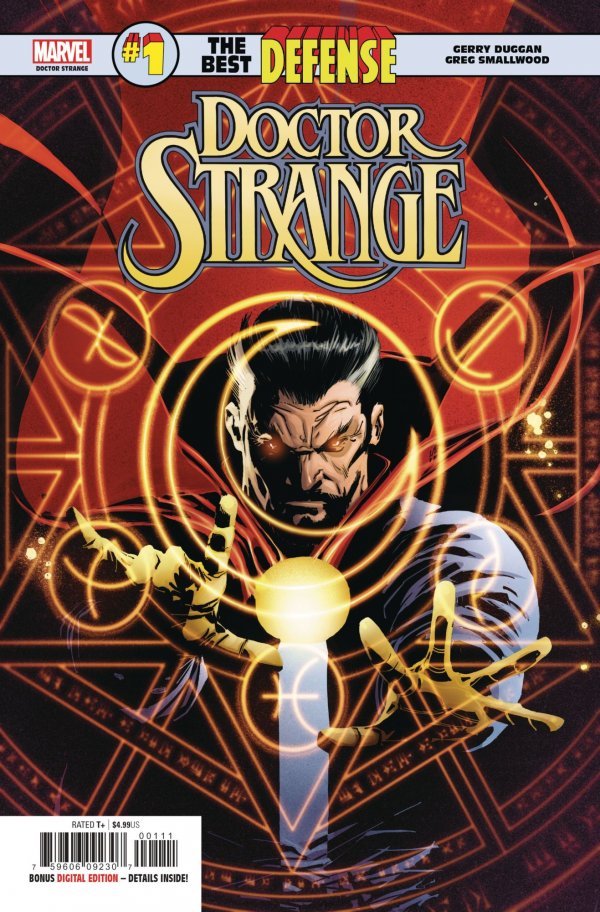 In the Doctor Strange one-shot for the new Defenders debuting later this month one question gets answered, but many more remain. At the end of the Immortal Hulk: The Best Defense #1, we see a very aged Doctor Strange on the astral plane getting ready to tell Hulk the tale that led him to where they both stand.

As you might guess, there is some time travel involved. Doctor Strange: The Best Defense #1 starts with a lone Sorcerer Supreme walking across a desolate landscape. He is considerably older and we soon find out, at the end of his powers and therefore the end of his life on Earth. He needs to pay a heavy price to use the eye of Agamotto. When he needs to fend off some demonic hunters, his fingers need to be forced into place to cast a spell. There isn’t much time for Dr. Strange, and he knows it.

Turns out, he’s the last person on the planet due to an invasion by a force of evil magical beings, most notably Dormammu, a familiar foe for Dr. Strange readers. Dr. Strange makes his way to a predetermined spot that looks vaguely familiar to the location where he met Hulk in the other issue. He sets a magical fire to rest by before the last battle. He dreams of Clea and a demon villain of his past. He is awakened by Dormammu.

The showdown between Strange and Dormammu begins and, like any good comic book villain, Dormammu is full of hubris, assured that he will easily defeat the spent wizard. Strange, however, has prepared for this moment with a number of tricks in his satchel. First, a disembodied head of the Hulk, which Strange altered to absorb and redistribute magic. Dormammu attacks, but his power is absorbed by Hulk. In turn, the Hulk releases the energy in a massive surge that destroys Dormammu and catapults Dr. Strange through space and time with a shard of the Silver Surfer’s surfboard. He eventually arrives at a time and place  where the Hulk will find him.

How Dr. Strange came into possession of these items will certainly be a part of the story once all of the principal characters come together in Defenders #1. It is apparent Dr. Strange realized that he needed these core heroes to save the Earth and perhaps the whole universe. We still don’t quite know how Namor fits into all of this. Intrinsically, we knew the stakes were going to be high, but it is in the Dr. Strange lead-in that we get a real idea of the scope of what the Defenders will be up against. When it all comes together, it promises to really be something else.