REVIEW: There’s more than meets the Eye (of Agamotto) in ‘Immortal Hulk: The Best Defense’ #1 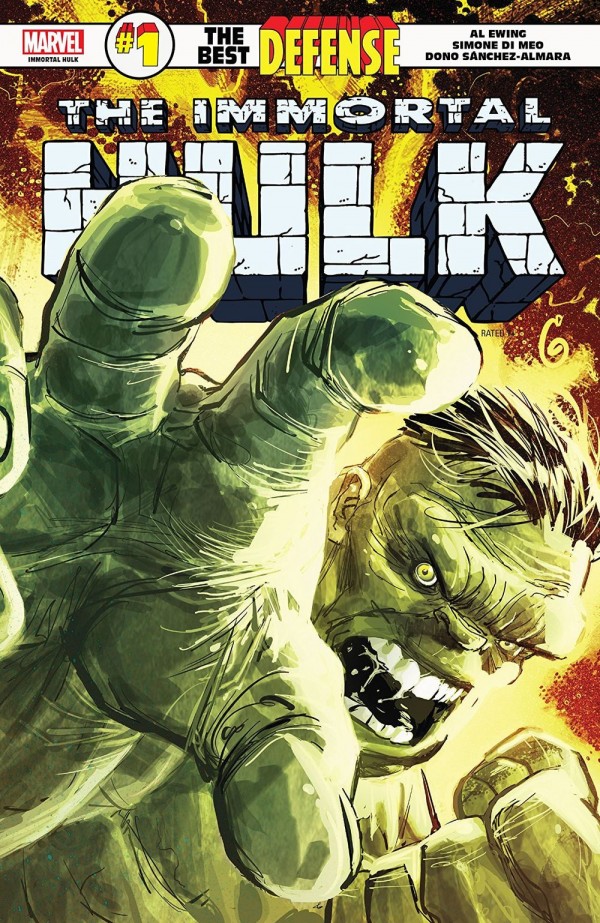 The second installment of the run up to the new Defenders series is everybody’s favorite emerald rageaholic, The Hulk! As we found out in The Avengers: No Surrender storyline, Hulk is pretty much immortal, hence the new  title, The Immortal Hulk. It is one of four run-ups (including Namor: The Best Defense) to the new Defenders title coming out later this month.

The story starts in a familiar milieu for a Hulk story, the desert, specifically somewhere in New Mexico. We find Bruce Banner wandering on some lost and lonely road, coming upon a town. The Hulk side of his persona is drawing him to the location where he finds the bones of his friend, Dr. Stephen Strange in a barn outside of the town. How Banner/Hulk know it’s Dr. Strange isn’t really clear, but he is sure that it is Stephen Strange. He also notices that the bones do not have the Eye of Agamotto. This is enough to make Banner suspect there is something more to Happy Trails, New Mexico than meets the eye.

Banner goes further into the town, only to find it deserted; no traffic, no pedestrians, no one in the sheriff’s office. Out of the corner of his eye, Banner catches the twitch of a curtain and goes to investigate. He finds a man and an old woman hiding and after taking a rather intense beating (with some great artwork) he finds the center of the mystery. 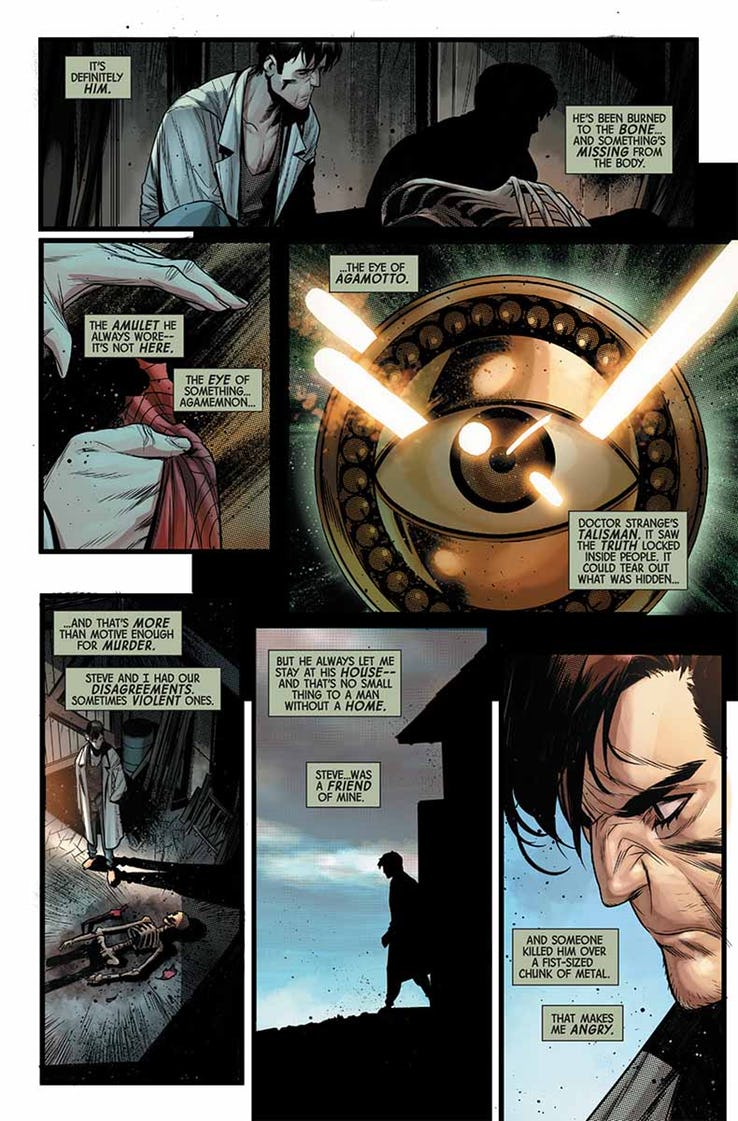 A nameless old vagabond has procured the Eye of Agamotto and is using the truths it reveals to hold the town police force hostage. He is doing so as a means of revenge because they had beaten him and dumped him outside of town. Seeing the truth of their own characters is enough to cow the officers and fear the vagabond.

Banner is sympathetic to the old man, but wants the Eye back. When the old man threatens to show Banner his inner truth, Banner accepts, much to the surprise of the vagabond. The old man commands the marshals to attack Banner, but that backfires as well. Once Banner gets a look into the Eye of Agamotto, his inner truth is revealed. The Hulk emerges.

The Hulk being the Hulk, no one is crazy enough to fight him, but he still wants to get to the bottom of who murdered Stephen Strange. The old man didn’t, and Hulk knew it. He realized that the person who burned Dr. Strange’s body was Dr. Strange? It was on this cliffhanger that the issue closes, hopefully to conclude (or at least move along) in the Dr. Strange lead-up to The Defenders.

A nice touch interspersed throughout the issue were panels of classic Hulk from the Lee/Kirby et al. era. The classic panels were a great device to show the internal Hulk dialogue going on while Banner was fighting. Admittedly I’m not a great Hulk aficionado, but this rendition of Hulk is the “smart” version which is my preference. I mean, who doesn’t love a well timed, “HULK SMASH!” but smart Hulk is a bit more nuanced and fun to read, especially over the course of an issue, let alone a series.

So, two previews in, two to go and then we get The Defenders proper. Namor and Silver Surfer seem to be paired and Dr. Strange and Hulk. How they all come together should be a fun start to the adventure. Pretty soon the band is going to be back together!