REVIEW: Keep the lights on when you read ‘The Reddening’ 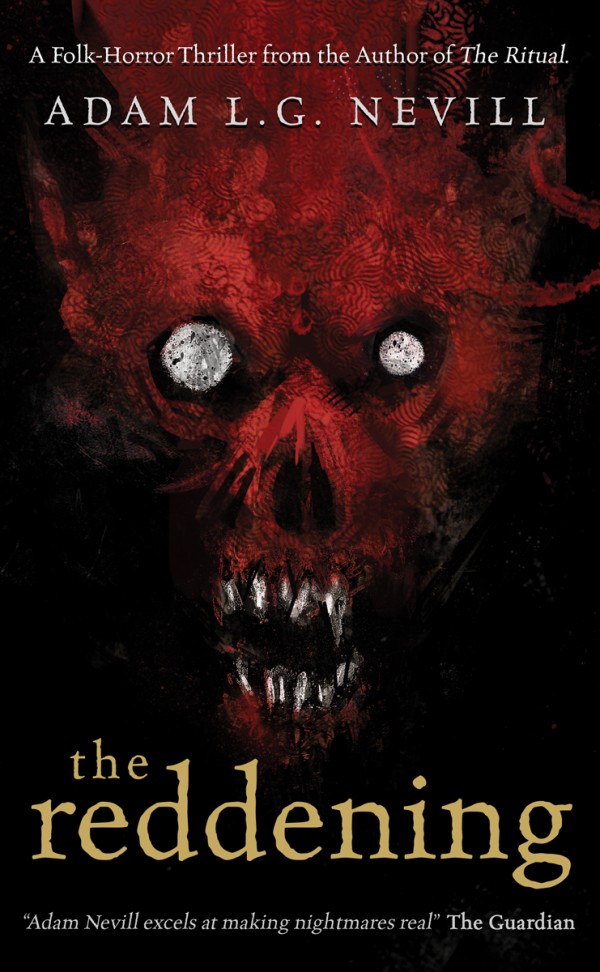 Back in the 1970s, when I was growing up in a small town in northeast England, there wasn’t an awful lot to do on a Saturday evening or when you got home from school, and television often filled the gap. And so I grew up, as I suspect many people my age from the UK did, on a steady diet of horror. Seriously. I mean, to give you a little taste of what our developing minds were exposed to, check this stuff out:

What united these shows was a sense of claustrophobia. An inescapable feeling that there’s something else in the room, an unseen menace lurking underneath and behind the normality of everyday life. Something that could turn reality inside out at a moment’s notice, upending all you know and pitching you headfirst into a terror that won’t let you breathe.

And that brings me to Adam Nevill’s The Reddening. I don’t want to spoil the plot or give away too many details, but rather share a sense of how the book felt to me as I became ensnared in it.

This is not a nice book. Extremely bad things happen to some people who don’t deserve it and also to one or two who might. At first, some of the badness is left to the reader’s imagination. Later, more is revealed in some of the most disturbing – and gloriously horrific – scenes I have ever read.

The story is set in a fictionalized version of the southwest coast of England, a beautiful mix of rugged coastline, picture-postcard fishing villages and lonely rolling farmland. But there’s something behind the cliffs, something inside the villages and something underneath the land. Something ancient that wants blood, that demands sacrifice and that provides bounty to those who serve it.

The story unfolds through two women whose lives rapidly spiral closer in this little corner of England. Kat is a journalist, burned-out by the intensity of London life and emotionally scarred by a bad break-up, who has headed west to seek a quiet life. Helene is a single mother from the West Midlands who is on the trail of her drop-out younger brother’s final days before he committed suicide. Through their eyes, we learn, at different speeds and in different ways, the awful truth behind rituals practised in this land for thousands of years. Nevill has crafted their believable backstories and motivations with great care. We could be them, dear reader, and when that switch is flicked and their reality is destroyed, we feel a part of our reality has gone too. It’s gut-wrenching stuff – and it wrenches this reviewer’s guts right back to those unnerving days of the creepy 1970s.

Music is also a constant and eerie undercurrent in this tale. A focal point for the goings-on is a dilapidated farm owned by a faded folk-rock star from the 1970s. I imagined a washed-up combination of Ozzy Osbourne, Robert Plant and Roger Waters, just with more mandolins and murder. The music of ancient prehistory is in there too, with the reedy piping of Neanderthal bone flutes. For me, a good story always evokes music and, as I turned the pages of The Reddening, I found myself first tapping my foot and humming and then later taking myself to Spotify for songs that evoked the mix of desolation, despair and death at the hands of Nevill’s ‘red folk’. For the curious, the songs that accompanied these hours of musical and literary delight are captured in this playlist.

I love a book that’s genuinely hard to put down, and this is one of them. But be warned: The Reddening is not a book to read alone. That sense of impending doom is there from the get-go. Stay close to your loved ones. Keep the lights on. Don’t, for gods’ sake, peek out of your windows at night or answer the door. Just read it, and forever be in the red…

Sapient is a multi-instrumentalist and sole member of the blackened death metal band Abomnium. He lives in a tall, thin house in Amsterdam, and his latest album 'A Hollow Path' is out on UKEM Records.
Copyright © Pop Mythology 2022, All Rights Reserved