REVIEW: Time comes for us all in ‘The Irishman’

With its near three and a half hour length and technology used to make the actors appear younger, "The Irishman" is a film obsessed with time. 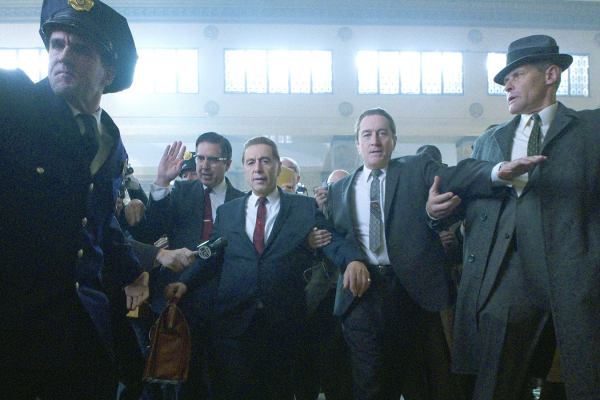 As far back as I can remember Martin Scorsese has been my favorite filmmaker. Back when I was probably too young for films like Raging Bull, Mean Streets, Goodfellas, and Taxi Driver – all of which were already considered classics. More than a personal favorite, Scorsese was a gateway to cinema. His passion for the art form informed my own and made me aware of directors like Akira Kurosawa, Alfred Hitchcock, Orson Welles, and Federico Fellini. Like me, an entire generation of filmmakers has since taken Scorsese’s influence to create their own with Spike Lee and Quentin Tarantino citing him as their primary influence. Yet sadly, as Robert DeNiro’s Frank Sheeran says of Jimmy Hoffa, most young people today probably don’t know much about Martin Scorsese, other than his recent criticism of Marvel movies. For the record, Scorsese’s comments don’t affect my opinion as it is possible to have different thoughts on art even from those who helped form how you think about art, especially when that sensibility is of a different time. And this might be the case with The Irishman as I am, staring down the dawn of my fifth decade, in a different place in life than the filmmaker I so admire.

Much of the pre-release talk of The Irishman has focused on the three-and-a-half-hour runtime and the use of de-aging CGI. While these two talking points gloss over the actual contents of the film, they reveal the film’s primary focus: Time.

This theme is clear from the first scene as DeNiro’s Frank – wheelchair bound in a retirement home with scalp visible through thin white hair – reflects on the start of his career as a hired gun. The film then layers narrative frames around each other before settling onto Frank’s relationship with former union leader Jimmy Hoffa (Al Pacino), now most famous for being the guy whose body was never found. Although a few characteristic Scorsese tricks speed and slow time, the film’s obsession is most evident when introducing new characters with the frame freezing – holding the second of introduction as eternal – and a text reveals the character’s date and cause of death. Every single one of these people will at some point die, even the most respected and well liked, delayed though they may be. It’s fitting that a man whose life was based around hastening the end of others would remember each person by when and how they died.

Through Frank’s flashbacks we witness a speculative account of recent American history, including the election and assassination of John F. Kennedy. True or (likely) not, framing this era through Frank allows us to live in his world. Uninterrupted conversations pull us into the rhythms of speech (with Pacino subtly changing his accent) and exist in their world as much as we’d like to. There is no rush to end Hoffa’s story, just as Frank is in no rush to end his own, and the film on occasion feels as though it is trying to delay what we know is coming, focusing instead on the memories which have brought Frank to this point in life. While this languid pace makes the film feel long, with only a few scenes of excitement to propel us forward, the film doesn’t lag. We know the time is passing, but we aren’t impatient for it to end. The film will get there, as we all will. There’s no need to hurry.

It’s remarkable that technology has allowed Scorsese, DeNiro and Pesci to reunite twenty-two years after their last collaboration (Casino, the first Scorsese film I ever saw in a theater) and equally remarkable that we can see DeNiro and Pacino together again twenty-two years after their first appearance together (Heat, still perfect). Yet more remarkable is how timeless the talent is. DeNiro still packs more emotion into a furrowed brow than others do in pages of monologue, his cool presence playing off Pacino’s fiery intensity. Although the years have amplified previous tendencies, with DeNiro speaking less than ever and Pacino adding more syllables, they effortlessly balance each other. Coming out of retirement, Joe Pesci exists both within and outside of this combination. In previous collaborations Pesci was the fire to DeNiro’s ice but here, with Pacino already exploding all over screen, Pesci is the earth of this particular metaphor – the footing on which both Frank and Hoffa stand, and the force without which neither would exist. Other performances prove solid but these three form the core of the film. However, as eternal as these talents are, it’s hard not to notice they are not the men they used to be.

Revitalized though they may be at no point do DeNiro, Pacino, or Pesci actually look young. Even when serving in the world DeNiro never looks younger than mid-40’s, courting his second wife looks like an older man going after a trophy. The faces have fewer wrinkles but the sag of skin around an elbow, or the slow way DeNiro steps over rocks betray his real age. This isn’t an indictment of talent. It’s impossible for acting skill to overcome physical limitation without even greater use of CGI. For a film interested in turning back the passage of time the visuals make it impossible not to be reminded of it.

Similarly, The Irishman seems a film out of time. The title itself, The Irishman, while evocative and fitting to that setting and generation, isn’t as interesting in a modern aesthetic as the original I Heard You Paint Houses, which curiously flashes across the screen at the start of the film while the actual title doesn’t appear until before the credits. There are sure to be people who argue that a classic Scorsese gangster film doesn’t jive the current zeitgeist but even putting that aside it is strange that the highest billed female star, Anna Paquin, speaks six words in almost 180 minutes. Her character and her silence carry emotional heft yet it is disappointing that the only female Oscar winner in this cast barely does anything. Given that the Hoffa story plays out as derivative of half a dozen other Scorsese films, a greater focus on Paquin’s Peggy – a woman afraid of her father for as long as she can remember – could make for a more interesting angle.

Further, the energy that punctuates Scorsese’s work as recently as 2016’s Silence is largely absent from The Irishman. From the insane surrealist imagery of Bringing Out the Dead, to the pugilistic flourishes of Raging Bull, to the walls literally closing in Goodfellas, Scorsese has an unparalleled command of camera, sound, and craft to heighten the protagonist’s experience. Yet here even the camera moves like an old man. It’s likely that the lack of “style” fits the reflective tone of the film, or possible that the cameras needed to make the effects work limited his options, but it’s hard not to imagine places in The Irishman when the Scorsese of the past would’ve used some zooms, fades, pull-ins, music cues, or some other cinematic feat to drive his points home. Instead The Irishman is actually kind of boring to look at. 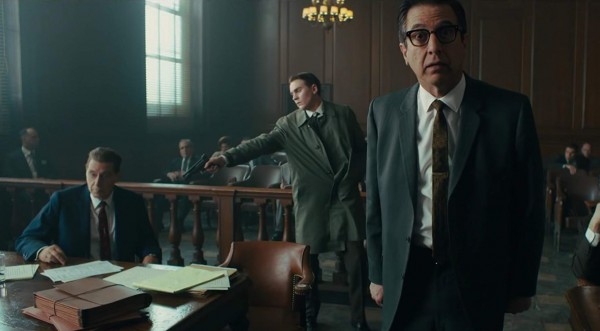 For all its violence “The Irishman” is mostly about sitting and talking. Image: Netflix.

In fact, it isn’t until the last half hour that The Irishman distinguishes itself among the “Scorsese” subgenre. Long after most of the characters have died, Frank continues on, an old man with only his memories to accompany him. We watch as fearsome men live out their years as feeble, their every step a threat to their well being. DeNiro’s stoicism takes on a quiet sadness as he shops for his own casket and chooses his own burial plot. The long, unmoving takes become a man clinging to every moment. It’s through this last portion of a good but not great film, that we finally see the appeal of The Irishman. Scorsese uses Frank to reflect on his past glories, many of them telling stories of men just like Frank, as time continues through him, his entire generation of filmmakers, and the audience that declared his early films as classics. While my generation – numerically trapped between X and millennial – may be at a different point in life and unable to connect with The Irishman now, it’s impossible not to imagine through the story, through the cast, through our parents, that one day this film will be more relevant than we want it to be. One day we will all move like old men, slow and stiff, with skin sagging at our elbows. One day we will all want to linger on the little, unimportant moments that stick in our minds if only to see the faces of those we’ve lost. One day we will all wish to pause, to turn back, to be the people we were. One day, far too soon, we’ll all be obsessed with time.

With its near three and a half hour length and technology used to make the actors appear younger, "The Irishman" is a film obsessed with time.
Facebook Comments

Jess Kroll has spent years traveling the world, writing books, performing poetry, teaching, playing D&D, and occasionally discussing movies for Pop Mythology. His novels include 'Land of Smiles' from Monsoon Books and young adult series 'The One' and 'Werewolf Council' from Epic Press. He can put his foot behind his head.
@jmskroll