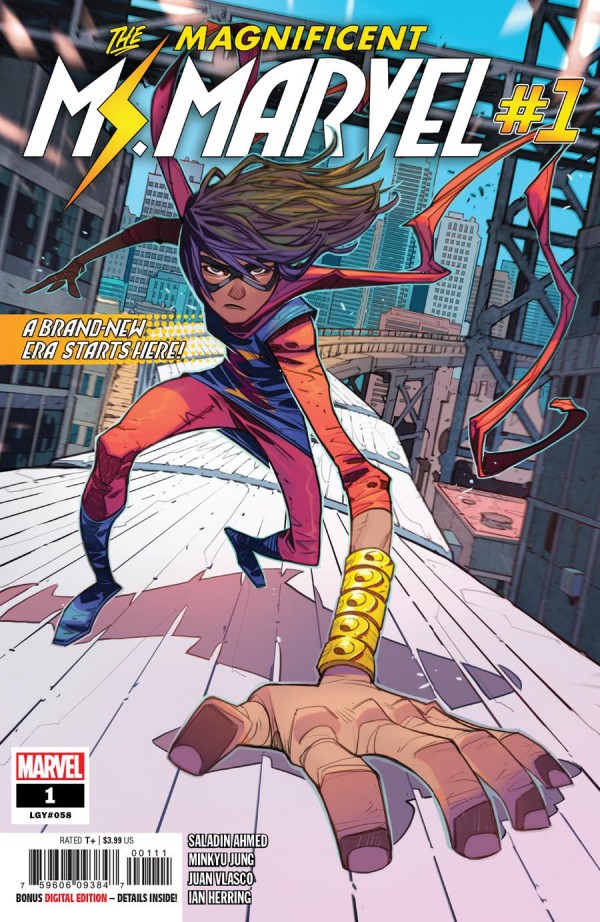 This marks the third  #1 for Ms. Marvel. Considering the character is not quite five years old, that seems like a lot of first issues, even by today’s relaunch heavy culture. However, if there was ever a time for a break from the past for a book now is the time for Ms. Marvel. (I miss the days of the long running numbers. The sense of longevity is lost and, as a collector, having three #1’s in five years kind of makes the #1s a lot less special. While I get the #1 as a means of drawing in new readers, I don’t recall having trouble catching up with the X-Men when I started reading the title with issue #167).

With an additional superlative added to her name, The Magnificent Ms. Marvel made its debut for Marvel this week. The original writer, G. Willow Wilson, is no longer with the book, and a new artist is on board as well. From the start, Wilson’s Ms. Marvel won critical acclaim, even garnering a nomination for an Eisner Award. So the new team of Saladin Ahmed and Minkyu Jung has some big shoes to fill.

It isn’t fair to say whether or not Ahmed and Jung have succeeded on the basis of one issue. We won’t really know until the first story arc or two have been completed if they were able to keep Ms. Marvel a strong and vibrant presence in the Marvel Universe. If issue #1 of the new team is any indication, however, Kamala Khan is in good hands. 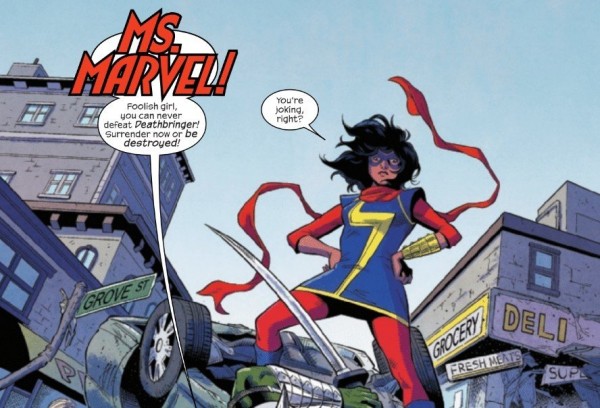 All of what makes Ms. Marvel a fun read is there; the Circle Q, Jersey City, Bruno, family and high school drama to list just some of the staples of the series. Most importantly, the uniqueness of the character remains in tact. Ms. Marvel the superhero has some of the most distinct powers in comics. It is a weird combination of Plastic Man and Ant Man. While not completely changing her features, like Plastic Man, she can make her fists super-sized or her legs extra long to move faster. She can also, shrink and embiggen her entire body to fit the tactical situation. Those powers act as a powerful metaphor for who Kamala is; a young muslim woman trying to navigate (stretch, shrink, fit) all the dynamics her identity entails.

This exploration of identity is most on display when Kamala is dealing with her parents. The Khans are immigrants from Pakistan and have more traditional views on what a woman should or should not be. Being a superhero is definitely on the negative side of that ledger. Making this dynamic even more difficult is that Kamala wants to be a good daughter but also believes she has a responsibility to use her powers for good.

As the final act begins in issue 1, those powers are on full display as Ms. Marvel encounters a new threat to Jersey City and quite possibly the world. I mean, of course it’s a threat to the world; why else read comics? If the conflict is something like simply keeping Jersey City safe, that gets kind of mundane.

Two questions leave us with wanting to read the next issue: first, what is up between Kamala and Bruno? Second, what are and where did these new baddies come from? That will have to wait until issue #2.