REVIEW: ‘Uncanny X-Men’ #11 has one of the best reunions in recent comic history 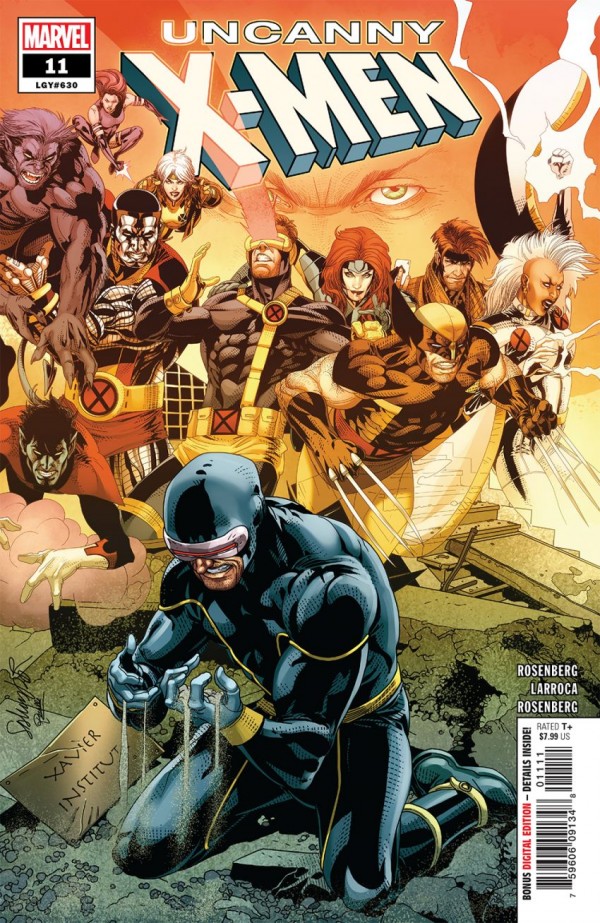 Matthew Rosenberg just saw the printing of Uncanny X-Men #11 today. Reading it, it reminded me of reading of something I figured out when I was a kid.

Let me explain. When I was younger, I used to get an excited charge of anticipation opening the door to the local comic book store of my youth because there was an X-Men title waiting to be picked up.

I really didn’t care if it was Alpha Flight, an X-Men mini-series, the New Mutants – I honestly just wanted to read about the heroes in my favourite sub-pantheon. Byrne, Claremont, Austin, Silvestri, McLeod, Sienkiewicz – these were the builders of the world in which I wanted to live in.

The X-Men were the ultimate outsiders. Sworn to protect humanity who despised them, and distrusted by the other super-powered communities. I think I was 13 when I first realized that significance. I had bee reading comics for about eight years to that point, and it was around that time that the intricacies of storytelling began to make themselves known to me.

It was Secret Wars that revealed that to me. You know, the first one? Written by Jim Shooter and drawn by Mike Zeck, John Beatty and Bob Layton, that was when the major characters of the Marvel Universe were split into three groups: the heroes, the villains and the X-Men. It was 1984 and I learned that my heroes weren’t defined that way; they were something else. 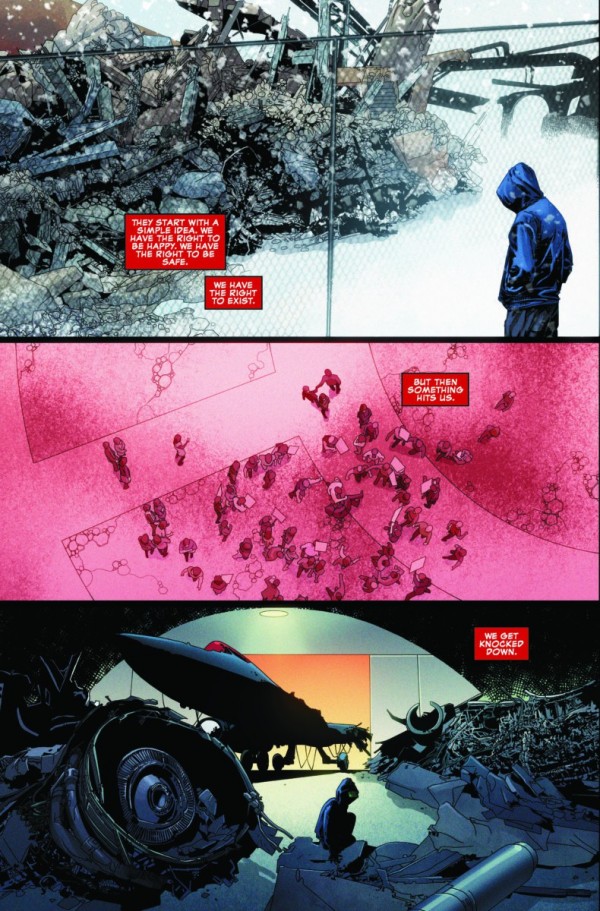 That got me thinking about where I fit into my own culture as a teenager. I couldn’t play sports but I loved martial arts. So, I wasn’t an athlete but I could be athletic. I was a nice guy but hardly popular, even though I had friends. I was a good student, but I had my academic weaknesses. Because of these attributes, I really didn’t fit into any of the social groups at school.

I decided I had to be a mutant.

Not literally, of course. But I was able to identify with the X-Men in a way that sealed my loyalty to this franchise. I was able to make direct comparisons to their activities to my own unique adventures in growing up. I knew I didn’t fit in but I was content to make my own way in the world, just like those mutant heroes.

I remember Matthew Rosenberg telling me about his own fond memories of reading his brother’s X-Men books when he was a kid. Every time I read one of his X-Men titles, I know that he must be calling upon those memories to create stories that pay homage to those amazing books by the same creators I referenced earlier.

That’s what he’s doing in Uncanny X-Men #11, which sees the return of Cyclops – a character who’s been absent from these pages and needs to return. I can almost imagine Rosenberg fist-pumping at key moments in the book when Scott Summers asserts his presence.

For example, Cyclops appears in this book without any fanfare or announcement. He readily dons the mantle of the outsider in a practiced way: the hood, the amorphous overcoat and is easily overlooked in the crowd. He eats in out-of-the way greasy spoons yet people are drawn to him because he does not seek out company. Like nature abhorring a vacuum, the more a person tries to stay away from others, the more those others try to seek that person out.

In this case, Cyclops is seeking the X-Men. 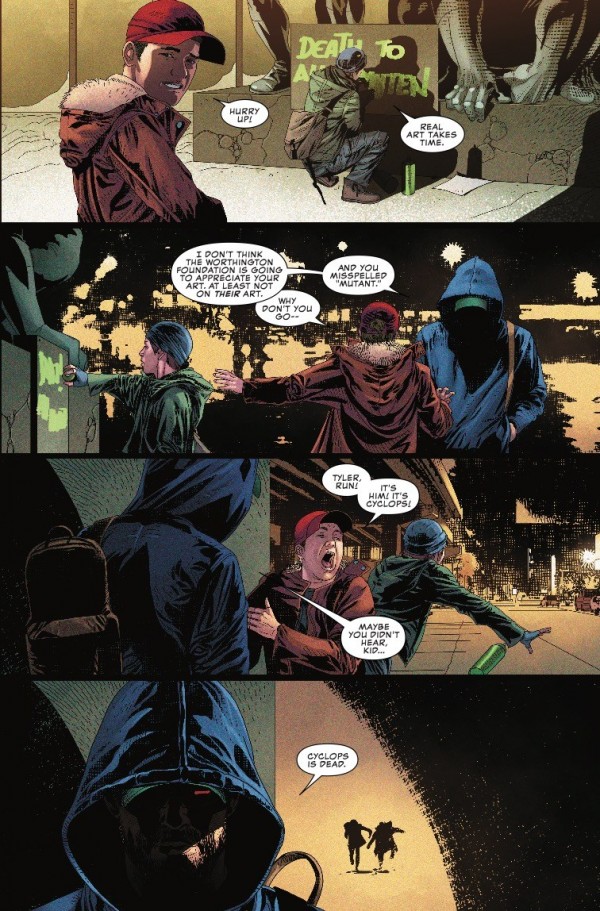 But of course, he is. In a sort of parallel structure, the absence of the X-Men only drives Cyclops more to find them. He manages to find those who were left over from their disappearance; lesser X-Men or X-Men allies but they can share no information on the X-Men’s whereabouts nor do they want to in this powered anti-mutant society. This is an America that now has the backing of elements of its government who have influence in removing Mutantkind forever with its new Anti-Mutant Vaccination. Cyclops needs to find his friends, HIS society and take his place in it.

But Scott Summers was always the grim leader who tried to distance himself from his own team by suppressing his feelings for them so that he could make hard decisions. There is a bit of a homage to that original character attribute in this. He never made friends easily and in a representative way. It’s going to be no small task to find them again.

Remember when Scott sent his techno-organic virus-infected son into the future to be cured? Yeah … that’s pretty cold.

Towards the middle of the book though, we see some of that grim resolve emerge. Summers confronts anti-mutant racists at a rally. He’s alone and is eventually mobbed by the rallyists and overwhelmed. He is forced to use his powers when his glasses are knocked off by the crowd and is eventually rescued by none other than Captain America.

However, we see some of that Mutant “third-power” distrust that was present in the Secret Wars. Though Captain America rescues him, Summers shows no gratitude and immediately lumps Cap in with the same group who have a politician in their midst. Clearly the government approves of this anti-mutant sentiment and as Cap is the symbol of America, then Scott tacitly concludes that Cap must approve as well. Before Scott can make a violent move towards him, Cap points out to him that he’s in front of cameras and suggests that he stands down.

Once more, Scott, the lone X-Man, is the Outsider. Standing before the world, he makes an impassioned plea to any X-Men who are remaining and can hear his voice to meet him at the place where it all began. However, when Scott gets there, he doesn’t meet friends, but former enemies of the X-Men who can’t resist taking out the last of the X-Men.

Then, with a turn of the page, Scott isn’t alone.

In one of the greatest reunion moments in recent comic history, a familiar friend returns to Scott’s side to fight with him – and then I remembered that sudden charge of excited anticipation of reading an X-Men book. There are four pages of combat at the end of the book, drawn by the inestimable Salvador Larroca and they are glorious.

At the time of this writing, it’s Matthew’s birthday today. Rosenberg is a mutant too. I mean, I can’t comment on if he fit in at school or whatnot, but given the nuances in this story that hearken back to the sense of reading those seminal X-Men stories, it’s clear that he identifies with this group of characters too.

Scott Summers is finally back. The Uncanny X-Men are back.