REVIEW: ‘Weird: The Al Yankovic Story’ would be funny if it weren’t completely true 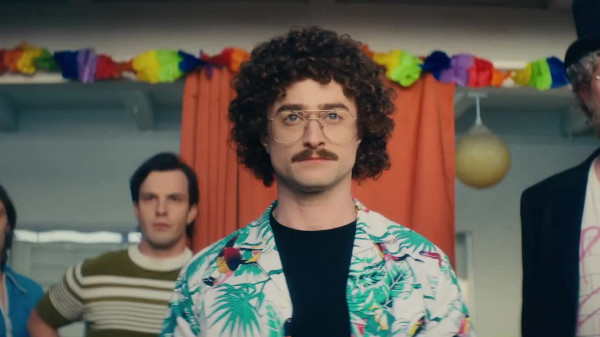 For those of us who grew up in the 1980’s Weird Al Yankovic was this wacky looking mustachioed man with long, loopy hair wearing an aloha shirt playing an accordion and singing funny song parodies about food. On television, he’d appear in silly music videos that spoofed the often overwrought and over-serious “mini-movies” made to accompany whatever song he’d added bologna or rocky road or Oreos or an overwhelming amount of polka to. He’d occasionally pop up on MTV himself, at times spliced into celebrity interviews, to mock and puncture the pomposity of the “rock star” the network so obsessed over, later using cable television as fodder for his own cinematic debut, the landmark satire UHF. Even his VH1 Behind the Music furthered Yankovic’s legend through lampooning the familiar rise, fall, and rise again story of every such musical icon. Yet, it isn’t until now, with Weird: The Al Yankovic Story, that those of us who grew up in the 80’s, 90’s, 00’s, and forever on until the end of recorded music, are finally exposed to the unvarnished truth behind this enigmatic and often troubled figure.

The startling revelations begin, as they say, at the beginning when the man we all know as “Weird Al Yankovic” was actually born Alfred (Al) Yankovic. Although he would clearly break away, or we wouldn’t be watching this movie, like most visionaries, Weird Al had to overcome the small minds which surrounded him in his early life, starting with his supportive but restricting mother and his violent, oppressive father. In this opening account of the harrowing childhood of the man who would become Weird, we of the audience become witnesses of the motivation of which Al would use in his search of the success that his father, an employee of the factory, claimed his son would always fall short of. The brutality displayed in these flashback scenes illustrates both the strength which typified Weird Al’s rise to the top of playing an accordion while singing lyrics changed from those of popular songs and the basis for the erratic, at times dangerous public outbursts which inevitably follow such meteoric success at playing an accordion while singing lyrics changed from those of popular songs. Yet, while longtime fans may be familiar with the inspiration for Yankovic’s early career masterworks “My Bologna” and “Another One Rides the Bus,” as recreated in production numbers that perfectly capture Yankovic’s unparalleled improvisational genius, even those most familiar with the Weird One’s public image will be ill-prepared for the shocking and true events which follow. Events we know are true thanks to a newly unearthed song which plays during the credits.

It’s difficult to discuss such an illuminating piece of biographical cinema as Weird without giving into the temptation, much as Al himself often did, of merely recounting the most glorious or shocking moments. It is, however, safe to say that in his feature film debut director Eric Appel has set the standard to which subsequent musical biographies must adhere. It is also quite generous of Appel to credit Weird Al himself as co-writer, likely because without Al living these events, Appel would have had to work with only the same occurrences already seared into our collective memory. While celebratory in Yankovic’s many astonishing accomplishments as technically not the best but the most famous accordion player in a very specific genre of music, Weird carries the persistent, at times crushing, undercurrent of inevitable tragedy. Of course musical recreations of Yankovic’s most loved songs are expected, respectfully staged with obvious lip syncing as none could ever match Yankovic’s distinct cadence and vocal restraint, but Weird doesn’t blink at portraying the uncomfortable moments, nor the soul-crushing self-destruction of one of the most propitious humans to ever exist.

While we viewers in the present are constantly aware of where this story will end, it’s through the accumulation of events, both those events which are widely known and those which are chronicled here for the first time, that we begin to see the world through Yankovic’s frames, sweeping us into the same feverish energy and simmering competition young Yankovic felt when attending Dr. Demento’s pool parties. The unmitigated genius thus displayed leaves little doubt as to why comparative nincompoops such as Salvador Dali, Andy Warhol, Frank Zappa, and even the antagonistic bassist from Queen who first questioned this novice songwriter would soon cite him as one of their greatest artistic influences. Yet even here, in this moment when we finally see the infinite potential embodied within this budding bespectacled prodigy, there is lingering melancholy in wondering that if it weren’t for this decisive point, where Alfred crossed the Rubicon into becoming Weird Al, perhaps Yankovic, and the world itself, could have prevented the resultant pain of watching such an incandescent virtuoso of singing about food over the music of popular songs ignite into the brilliant, blinding inferno which forever burned the edges of humanity’s artistic vision. There is, after all, a reason that eyeglasses are also called spectacles.

Yet, much as we can have faith that these events, incredible as they are, must be true by virtue of being in a movie, there are certain others which standout as unfortunate omissions. Given what we know of Yankovic’s impetuousness, it strains credulity that the artist wouldn’t have taken greater issue with some wannabe pop singer’s pathetic act of plagiarism. As much as Weird exposes Al’s heretofore only whispered of “dark side,” it’s striking, and more than a little disturbing, that the film abstains from even hinting at what horrors must have ensued when this passionate titan of the squeezebox confronted little Michael… Johnson? Jason? Jackson? Jackson! Doesn’t matter. Not like anyone remembers him. It’s also bizarre, and frankly disappointing, that a biopic about an artist famous for his song parodies wouldn’t have some element of parody itself. For all the perceived humor and silliness of its subject, Weird, as proven by being a movie and then a song about that movie, is entirely without exaggeration or fabrication. In fact, if not for containing no original footage of the events depicted (I assume such reels have been permanently enshrined within the most controlled vaults of the Library of Congress so that they may never be lost or duplicated for fear of lessening humanity’s self worth), the film could pass as a documentary recreated by professional actors.

After seemingly spending the last several years determined to destroy any image of himself as the star of a series of kid wizard films, Daniel Radcliffe continues his string of hardcore roles by donning the titular character’s curly hair and aloha shirt. Though it’s doubtful that any other mortal could ever capture Yankovic’s dichotomy of innocent silliness and intense depravity, Radcliffe comes closer than any other thus far, as I’m confident that source material as rich as that of Weird demands further examination. The actor shows the same reverence that we all feel for the subject, noticeably taking great effort in attempting to match Yankovic’s famously muscled physique, Yankovic of course being a fitness influencer decades before such a term existed. It is, however, a little disappointing that Radcliffe didn’t use any of the magical skills he’d learned from his wizarding years, perhaps because his grasp of mystical arts pale to those at Yankovic’s command. Yet, good as Radcliffe is, it’s Evan Rachel Wood’s turn as Yankovic’s femme fatale Madonna which often steals the show. Through her performance, the notoriously camera shy, one-note former pop singer becomes a sweltering temptress, not-so-subtly scheming toward the greater heights her own meager talent could never achieve, all while Wood herself remains in the singular fashion style and bubble gum habit Madonna has maintained ever since the 80’s. Her role in Al’s life trends a little too close to the evil woman trope, but hey, we can’t argue with reality! After the shocking events disclosed in Weird, Madonna herself finally becomes intriguing enough to warrant her own biopic, hopefully one as thoroughly researched and unflinching as Yankovic’s.

The world can only wonder how different both our lives and that of Yankovic himself would have been had Alfred followed a path more adherent to the image he so strained to fabricate. If he had come from a loving family who supporting him in his dreams, resisted the temptations of fame, and remained dedicated to the sublime art of writing joke lyrics to pop songs, perhaps his career may have lasted long enough to see himself become the subject of parody, his life offered the same rose-tinted treatment offered to considerably less controversial or tragic artists before him. Alas, that is not the world we live in. In our world, the one depicted in Weird: The Al Yankovic Story, the children of those of us who grew up in the 80’s, 90’s, 00’s, and their children, and their children after them shall forever live in the shadow of a once brilliant accordionist and parodist who before suffering the same fate accomplished what Icarus never could. Leaving nothing behind, in the end, but spectacles.

Jess Kroll is a novelist and university professor born in Honolulu, Hawaii, and based in Daegu, South Korea. He has been writing film reviews since 2004 and has been exclusive to Pop Mythology since 2012. His novels include 'Land of Smiles' from Monsoon Books and young adult series 'The One' and 'Werewolf Council' from Epic Press.
@jmskroll
Copyright © Pop Mythology 2022, All Rights Reserved