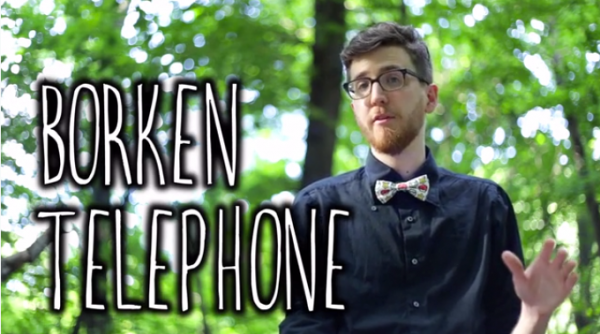 Peter Chiykowski isn’t best-known for spending time behind a microphone – his fans know him as the writer and illustrator of the popular webcomic Rock, Paper, Cynic. But Peter has always been interested in expanding his creative horizons, and his most recent project reflects his unique take on all things geek.

Peter is poised to join a growing number of musicians across North America and indeed the globe in the niche market-turned popular genre of “nerd music” (or “geek music”), a catch-all denomination gaining traction not only in fandom communities, but in the mainstream as well. Nerd music is widely agreed to have its roots in filk, though some credit “Weird” Al Yankovic as the genre’s spiritual godfather for bringing quirk into the mainstream. Spanning a variety of genres, nerd music can be found expressed in rock (Kirby Krackle, Harry and the Potters, H2Awesome!), folk (Jonathan Coulton, The Doubleclicks, Molly Lewis) and even rap (Wordburglar, MC Frontalot, MC Lars). But Peter and his guitar cast their lot with the softer side of nerd music, as expressed in his debut album, Borken Telephone (not a typo) which he’s currently funding through a Kickstarter ending on Friday.

Borken Telephone will feature a fascinating collection of songs asking such questions as (in his own words) “What if a bodiless AI had a huge crush on its creator but had no way of expressing itself? What if you performed a love song for the NSA by singing security watchwords near cameras and phones? What if a philosopher used epistemology to go on a zombie-slaying spree?” The album is being produced by pianist and comic aficionado Tico Souza, and (depending on how much is raised through Kickstarter) will be available in a variety of formats from download to physical CD.

But what really makes Peter’s foray into nerd music shine is the title track on Borken Telephone. Peter’s self-described musical “mad science” experiment will involve him recording a 50-second song, then passing the recording to a new artist, who will listen to it once and then record a cover based on how they remember the tune. Then the song is passed to the next artist in line, and the next, and the next, until Peter returns to cover the end product of the “borken telephone.”

Peter has gathered an extraordinary number of nerd music artists both local and international, ranging from Toronto’s own Kari Maaren, Nerds With Guitars and Debs & Errol to superstars like The Doubleclicks, Adam Warrock, Kirby Krackle and Professor Shyguy. Stretch goals on the Kickstarter may see other big names including MC Lars, MC Frontalot and “Epic Rap Battles” Zach Sherwin.

With so many genres and so many artists involved, Borken Telephone should be worth a listen for the title track alone. And if you haven’t acquainted yourself with Rock, Paper, Cynic, check it out here and say goodbye to the rest of your afternoon.

Ember Ross blogs about all things geeky and enjoys raiding, rhyming words, and 'Red Alert.' He lives in Toronto, Canada.