Shanghai Red #1 is reminiscent of the the old pirate pulp comics of the 1950s. The comics that led to congressional committees and the creation of the Comics Code of America, not the sanitized ones from later in the decade. The story starts out bloody and though the actual body count doesn’t rise very much after the opening, blood has a strong presence throughout the book. Part of that is the color palette used by Joshua Hixson but it also comes from the internal conflict of the protagonist, Red.

Though the story has the feel of a pirate comic, it isn’t quite accurate to call it a pirate comic. Yes, the majority of the first issue takes place on a boat, the Bellwood, but it isn’t a pirate vessel. We really don’t know what kind of boat it is, but we know that it impressed its crew in order to get to China, Shanghai to be exact. We join the story as the impressed crew has reached the limit of their service time and the captain is about to offer them a deal: leave the ship, destitute in China or sign up for two more years. Red takes option three: kill the captain, first mate and loyal crew and take over the ship and sail back to Portland, USA. 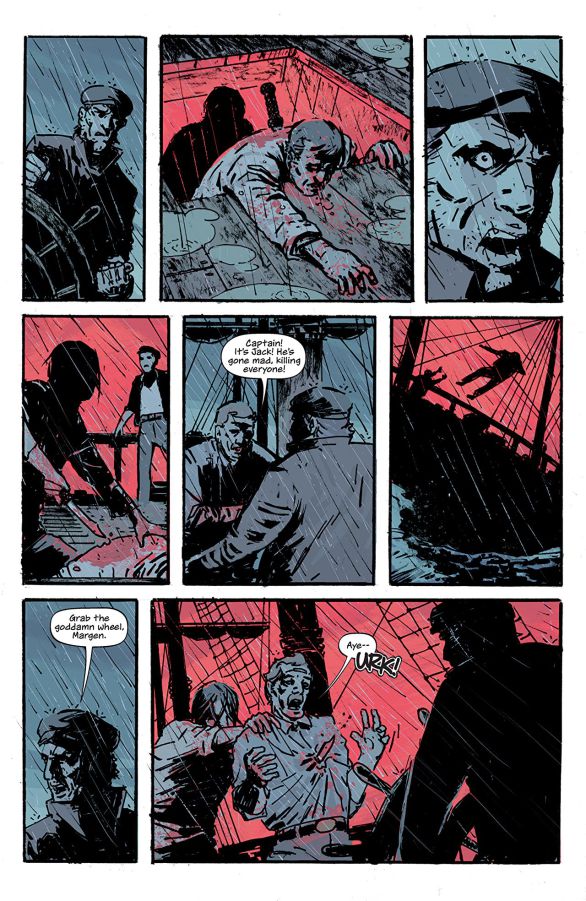 I’m a sucker for nautical stories: Horatio Hornblower, Treasure Island… not so much the Aubrey-Maturin series. I thought I was in for much more riding on the high seas, and that still might be the case, but that wasn’t the focus for this issue, which was a nice surprise. Teaches me to judge a book by its cover. Instead the journey across the Pacific is barely mentioned. Instead we get Red’s backstory. Which led to another pleasant surprise: Red’s backstory isn’t what one might expect. It’s not a wharf rat, taken from a tavern and sent to sea. Well, we might still get some of that, but the origin of the story goes back further. Red, her mother and sister were pioneers on the Oregon Trail. They make it to Oregon, not without their share of hardships and make it to Portland, struggling to make ends meet, but making it nonetheless.

It was from this modest, yet promising beginning, that Red is taken and it gives us a great preview of what is to come. Red is intent on two things: finding who kidnapped her in the first place and finding her mother and sister—two solid plot points, reunion and revenge. In the backstory, however, we also get the sense that Red has a bit of a wandering soul, a yearning for adventure. So, once this business in Portland gets sorted out, a ship awaits and we might get to those high seas after all.

Admittedly, this book fell right into my wheelhouse.  Not just a historical setting, but how many comics pull in the Oregon Trail? Christopher Sebela does a great job of matching the time with the dialogue and with establishing the setting of the pioneering northwest. I can’t wait to see where he takes Red as a young woman in a man’s world. I’m interested too in the backstory of Red’s first ally, Boston. It’s hard to discern if he is African-American from the art and that isn’t important per se. However, I’ve already imagined his backstory as an escaped slave, finding freedom on the frontier. Regardless of the real backstory, I’m especially intrigued why he sides with Red after the mutiny on the Bellwood. Always a good sign when I’m excited to find answers in the coming issues.