‘Shipstar’ offers an incredible and plausible vision of the future 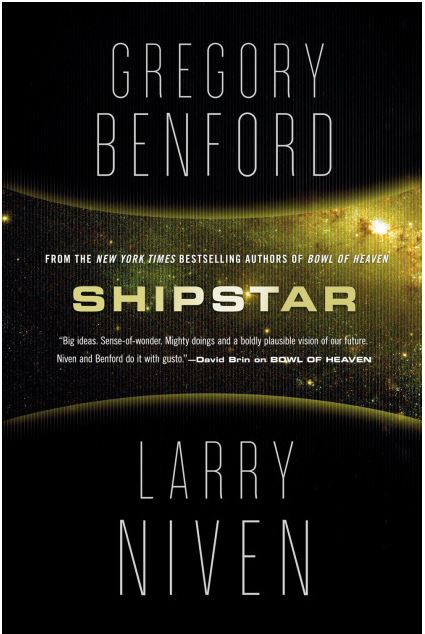 Shipstar is a collaboration between two hard-core science fiction powerhouses, Gregory Benford and Larry Niven, and is the sequel to Bowl of Heaven, published in late 2012.  The combination of these two minds, Benford’s Cal Tech-level astrophysics and Niven’s stunning Ringworld-style imagination, results in a series that is everything good science fiction should be: a plausible and even probable vision of the future.

The first book, Bowl of Heaven, begins with a human ship sent to colonize a distant world that encounters a curious object en route.  The object in question turns out to be an unfathomably large, spinning, bowl-shaped structure powered by a small star.  The inner surface of the bowl has a thin layer of organic material on it, which supports a wide variety of life forms.  The star not only warms the bowl’s surface, but its rays are refocused via gigantic mirrors to create a jet which propels the whole construct along like a massive, interstellar luxury Carnival cruise ship.  The humans land a scout party on the Bowl’s surface and half are immediately taken captive by the bird-like alien species in charge, while the others remain free to explore the vast landscape.

While Bowl of Heaven spends most of its time setting the stage and introducing us to the structural design, in Shipstar we are treated to incredible visions of a potpourri of extra-terrestrial biologies and psychologies.  The hierarchy of sentient Bowl life seems to be divided into the bird-like aliens as the caretakers and a number of different “custodial” inhabitants.  The humans choose to ally with the most sapient of the subjugated species against the oppressive bird regime.

Interestingly, despite to grandeur of the vision of the Bowl, the technology involved seems, for the most part, to be only a short extrapolation from current knowledge, making the story even more compelling.  The possible exception, which the authors readily admit, is the tensile strength of the material for the construction of the Bowl supports.  The science, though, also leads to the only significant weakness in the books.  In a few instances, particularly with respect to explanations of the star’s propulsory jet, the descriptions get bogged down in an unnecessary level of detail.  It can easily be forgiven, though, as it is no doubt attributable to Benford’s enthusiasm for his field of expertise in plasma physics.  These instances are also infrequent and occur in sections that can easily be skimmed or scanned as per reader preference.

In reading these accounts, it is compelling to think how far science fiction has evolved in the last 50 years of imagination from green, humanoid, canal-building Martians.  Indeed, after reading Shipstar, one can readily understand that science fiction may serve to help prepare us for the day when we have our first “close encounter of the third kind.”