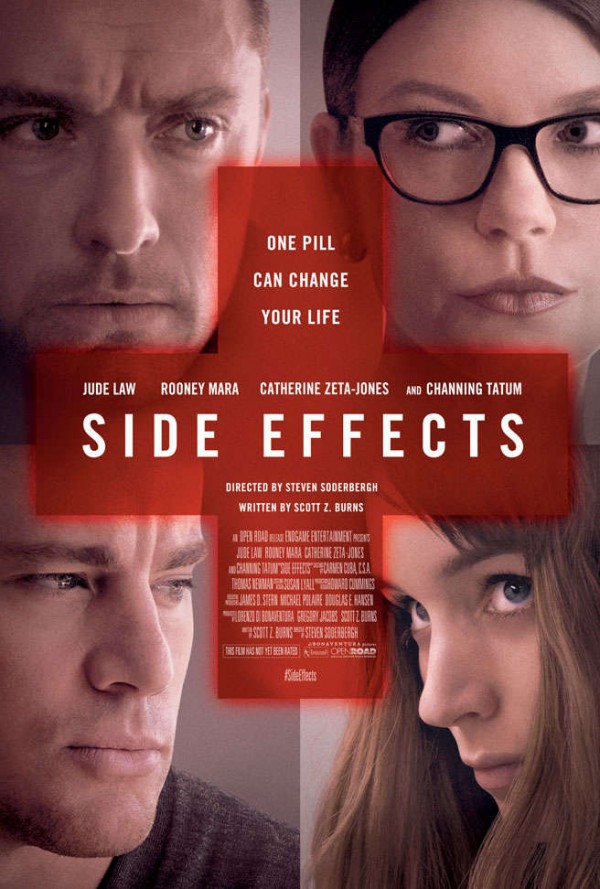 In a similar way that beta blockers alter the reception of stress without addressing the cause of that stress, Side Effects uses Soderbergh’s history of vast social examination movies (Traffic, Contagion) as a cover for a tense, Hitchcockian thriller.

As is true of all his experiments in genre filmmaking (Out of Sight, Haywire, the Oceans movies – some more successful than others), Soderbergh again finds room within the thriller genre to expand while staying within its established conventions. However, unlike most of Soderbergh’s recent experimental work (The Informant, The Girlfriend Experience) there isn’t a detached, almost analytical approach to the subject, nor the committed atmosphere and precise photography of his smaller, non-commercial films (Solaris, Che I&II). The result is a surprisingly loose feel for both this director and for this genre. In fact, the beginning of the film is so slow, at times meandering, such misdirection, that the audience’s attention may wane numerous times until the true subject comes into focus.

Perhaps the first clue to Side Effects bait-and-switch is the lack of a massive ensemble cast in favor of four main characters by known actors. Well, kind of known, the least established is Rooney Mara. Jude Law and Catherine Zeta Jones are veterans of Soderbergh films and the director’s continued use of Channing Tatum remains baffling. Of these Jude Law pulls off a remarkably strong performance but is still overshadowed by Mara’s fragile yet volatile one.

If this is indeed Stephen Soderbergh’s final film (please, no!) he goes out in a predictably unpredictable manner. The only real expectation of Steven Soderbergh as a filmmaker is that his projects will always veer off into unexpected and innovative directions, be they through story, character or craft. What other filmmaker could score massive mainstream success with Oceans 11 and then return a year later with the tiny, New Wave-esque Full Frontal? Hopefully there will be another twist to come. This finale for the auteur, like that of Side Effects, comes well before its welcome is worn. [subscribe2]