Small-town people and secrets – a familiar combination of factors that make the town of Waterbury comfortable and welcoming, as a small town should feel. But small towns have secrets … and when those start to come out, the blood begins to flow and Waterbury is no longer the small town that we want to know, but we begin to fear.

Slasher – the new television series from Shaftesbury Productions (Murdoch Mysteries) and Super Channel, promises to intimately draw us in, close enough to smell the stinking breath of the murderer that has violated this idyllic setting and then leave us to fester in our own insecurity and think about our own vulnerabilities.

PopMythology was extremely fortunate to sit down with the showrunner and creator of this new television show, Aaron Martin, along with principal actor, Steve Byers, and learn more about the characters and some of the secrets of this new and chilling show.

The story centres on Sarah Bennett: the victim of a brutal home invasion and murder that took her parents. Returning to the small town where she was born, she decides to confront ‘the Executioner’ – the serial killer who killed her family and put the past behind her. But then when a new killer emerges, copying the same series of murders that took her parents, Sarah has a new challenge.Old secrets unfold and reveal themselves and even the seeming security of a small town holds no protection.

That was the first question we had for Martin – who was accompanied by actor, Steve Byers who plays Sergeant Cam Henry in the show: what is it about the appeal of a small town for a horror setting?

“When you grow up in a small town, everybody knows each other’s weird business. There’s a lot of weird stuff that goes on in small towns that you don’t hear about because they’re small, but they can be just as weird as big cities. But big cities are more anonymous – you don’t get that in a small town – everybody knows. So I wanted to get that sort of a weird, claustrophobic feeling yet in an idyllic setting.” Martin answers.

A small town is a place of security. Both Martin and Byers – and me, for that matter – grew up in small towns. Martin originally hails from Brantford and Byers grew up in Unionville. Both are familiar with the type of secure dynamic a small town can provide, but can also empathize with the damage the loss of that security can cause to those relationships.

But the title of Slasher is also more than it makes out to be. Sure, in the initial 15 minutes of Episode One a home is invaded, a couple are brutally knifed to death and a baby is ripped from its dying mother’s womb – which more than justifies the “hack & slash” title, but there is more to this series than just that. With the growing layers of secrets that reveal themselves, Slasher gives us more to think about than just blood and guts galore.

“Titles are hard, I wanted to make sure that people knew that there would be horrible, bloody scenes but at the same time, when I pitched the story, it was also an Agatha Christie novel. There is stuff to think about.”

Steve Byers, who plays Sergeant Cam Henry, added a comment. “Aaron’s an amazing writer. I mean, my wife, horror is not her genre at all, but when she watched the first episode and saw the well-written drama combined with the horrible, terrifying stuff – you come for the drama, but stay for the murder, you know what I mean?”

“You want the audience to feel upset when characters die. Unlike a typical slasher film where characters are killed indiscriminately, there’s a reason for why characters die in this show and a real sense of investment in them and when they go, they’re gone.” 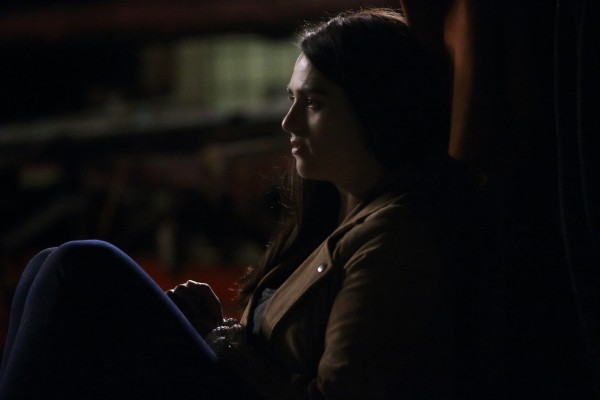 In Slasher the audience feels the value of each character. That makes a real difference in watching this show. It’s not that every character is a suspect – though there is that angle to it, but at the same time, every character has a unique value that viscerally ties them into the show. As Byers says, when they’re gone, they’re gone.

Sarah Bennett is the main character in this story. Everything revolves around her and her return to the town where her parents were murdered and she was born. Played so well by Katie McGrath, Sarah is a nexus points of secrets. She returns years later to take up residence in her family home and discovers that people know more about her family than she does herself. Even the house itself holds secrets that she eventually discovers. These begin to seep out when copycat killings occur.

Cam Henry is a character with secrets too, especially when it comes to Sarah Bennett.

“He’s a loyal guy who’s become a cop in his home town. It’s his being. Sarah coming back has brought back a lot of issues for everybody and all of these issues are starting to come out from under the rug. His relationship with Sarah – you understand right away that he’s always shone a light for her and he wants to protect her.” Byers tells us. “When she left – there was sense of finality. She changes that when she comes back and completely shatters the mold of what he thought the world was going to be like.”

Even veteran actress, Mary Walsh, whose incredible performance in Episode One as the irascible neighbour, holds her own secrets. At first, it is enough to simply dismiss her as a crank, but her religiously fundamental nature helps to add a definitely creepy overtone to the show.

“Mary was a real trooper. That was the week in the summer when it was 35 degrees every day. We had her covered in blood and a lot of lights. It made that room about 50 degrees. She was up ‘til the early hours of the morning (her scene was a night shot) and in the second story of a house without air-conditioning – all the things we did to her and she did it cracking jokes and without complaint. I can’t say enough about her dedication.”

“And the flies!” Byers chimes in.

Turning back to the theme of religious fundamentalism. In the opening minutes of the first episode, Sarah and her husband Dylan (Brandon Jay McLaren) listen to a “Bible Belt” radio broadcast preaching about salvation and hellfire. Later on in the show other signs of fundamentalism pop up as well. We asked Martin about this.

“I think fundamentalism is creepy.” Says Martin. “Not that I’m against religion, but I think the fact that there are a set of rules that you have to follow, because if you don’t, you’re going to burn in hell forever. I mean, it’s got just such a black and whiteness to it that I personally find creepy.”

Sure enough, we see more of this develop in the relationship Sarah develops with Tom Winston (played by Patrick Garrow – Killjoys), aka ‘the Executioner’ as she confronts him in jail to put him behind her. The conversation contains many other religious connotations that begin to make viewers speculate about what is going on in Waterbury.

Patrick Garrow is joined by other Killjoys alums like Rob Stewart, who plays local pastor Alan Henry and Mayko Nguyen who plays Alison Sutherland. There are also a good number of the cast with experience in shows like Dark Matter, Supernatural or Saving Hope; all shows that Martin has a good deal of experience with or are science-fiction/fantasy oriented. The question had to be asked: do actors with this type of background make for good horror actors?

“I worked on the first season of Killjoys. Patrick, Rob and Mayko were all cast [on Slasher] because they were extremely good actors. I didn’t look at the shows – they just blew everyone away. They would embody the part like I imagined. But I think the fans are more closely intertwined within the genres. You get into that room and you see people with Jason masks and not masks from ‘Bridges of Madison County’!”

Still, the automatic migration of those fans to this show is a result of thoughtful casting and is an added benefit to the fact that these actors are naturally geared towards performing in this sort of a milieu. Another secret behind the success of this show.

Slasher is tension-ridden psycho-thriller dripping with bloody secrets. Whether it is the enigmatic conversations Sarah has with Tom Winston or the after-hours activities of the local deputy, the big question that has to be answered is who is this new killer who threatens to return Sarah to the hell that she escaped from as a baby? What is it about the citizens of this small, innocent town that has attracted this killer’s attentions – again?

Premiering in Canada on Friday, April 1, on Super Channel, make sure you are prepared to lose yourself in the intricate plots that shadow the seemingly innocent small town of Waterbury.

Just watch for all those secrets.