Preview: Spider-Man to join the faculty at the Jean Grey School for Higher Learning

No, indeed he isn’t but that hasn’t stopped the X-professors from welcoming him onto the faculty, according to writer Elliot Kalan who will pen the new series Spider-Man & The X-Men launching this December. Artist Marco Failla will be joining him on the title which, with the highly publicized death of Wolverine, will be replacing Wolverine & The X-Men.

Says Kalan, “He’s there because Wolverine asked him to do it, though being a teacher isn’t the extent of the mission.”

Apparently, in addition to being a teacher and guidance counselor he’ll be a covert detective investigating some sort of mystery or other yadda yadda.

So that’s the news, here’s a bit of opinion:

Generally, I find it impossible to keep up with even a quarter of Marvel’s current titles at the rate they proliferate. So when they add yet another one, it’s generally more annoying than anything else. But I have to say, I’m actually pretty excited about this one, and for a number of reasons:

First, Spider-Man’s one of my favorite characters and I love it when he interacts with any other major character in the Marvel universe, particularly the X-Men since he tends to interact with them less often than other characters like the Avengers.

Next, I really enjoy it when he’s put into a mentor position as he was in AvX  when he was asked to train Hope Summers. Partly because he’s such a light-hearted character and other characters therefore find it hard to take him seriously, so it’s enjoyable to watch how he establishes his authority as a teacher and gets taken seriously as someone who knows his stuff having himself learned it through the school of hard knocks.

Finally, there’s that fish-out-of-water element which, when done well, can be quite enjoyable.

Anyway, here are a couple of preview images from Spider-Man & The X-Men. Class begins in December. 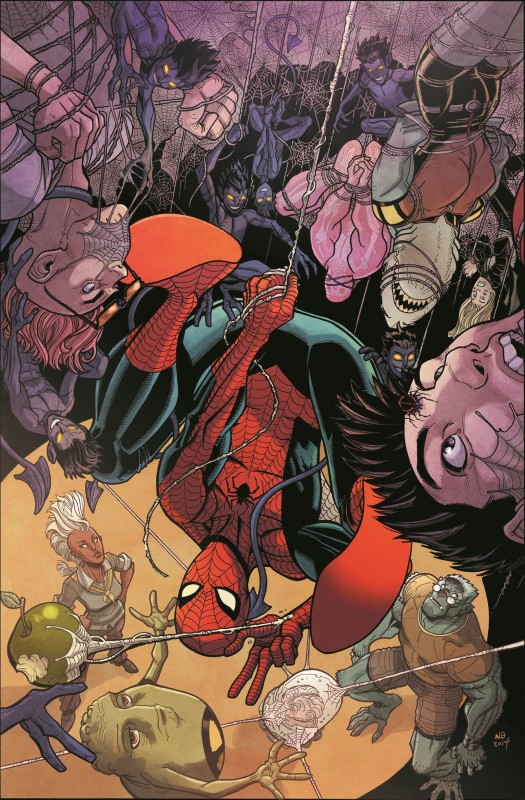