At 95, Stan Lee was “waiting” to do more writing. Maybe now he can.

My first introduction to Stan Lee was in 1977 in a small bungalow in Saskatoon, Saskatchewan where I first read copies of John Byrne’s Iron Fist and X-Men. These were my first comics in Canada, emigrating from Scotland.

I had no idea who this “Stan Lee” was, presenting the comics that I thought were made by these John Byrne and Chris Claremont guys. I needed to know who he was. From that time on, I learned that if it was a Marvel Comic, it was Stan Lee’s job to present it to the reader. He created or co-created the X-Men, the Avengers, Iron Man and all the other heroes I’d heard about. In my eight-year old’s mind, he became somewhat of a mystery-figure, a venerated wizard of comics.

That’s who he remained for my entire life of reading comics. But as I read more, the more real he became in my life.

As I write this, it’s been about seven hours since I learned about the death of comics’ most prolific ambassador. The wizard is gone, but the number of personal recollections, anecdotes and tributes that have come across my feed in that time are absolutely astounding. Of course, this should come as no surprise. After all, Stan Lee can be considered the father of all sorts of astounding stories to three or four generations of eager dreamers.

Is it any wonder that his passing should inspire so many tributes?

What stands out is that these stories talk about real things: Stan’s excitement, his love of the fans, and his generosity with both readers and creators alike. They all take care to emphasize how “real” he was. It’s these stories that have caught my eye and in this, my own tribute, I’d like to look at a few of them.

For instance, one of my Facebook friends recounted how, working at a comic-convention escort, he needed a pass to walk Stan around. He was told by the convention organizers that he’d have to purchase one. Hearing, this, Stan took the one from around his own neck and said he could have that one and that he’d love to see them stop him!

Even after his death, he still inspires more stories.

Here’s my own story of first meeting him. It was a regular photo opportunity at Fan Expo. I had to meet him even if it meant I had to stand in line for at least a few hours. I had a few books for him to sign and was wondering what I would say to him when I got my photo.

I was pretty much first in line. Despite the line-up around the corner, it was a relaxed mood. The fans were impatient, but there wasn’t a sense of pressure from the crew.

It was my turn and I walked behind Stan. I asked if I could put my hand on his shoulder. He was a bit hard of hearing and asked me to repeat myself.

“Go ahead! As long as you don’t put your hand anywhere else, Sport! People will talk!” he said with a smile. His shoulder felt rail-thin and even though I knew he was an older guy, it was his frailness that surprised me, especially with his energy level and sense of humour but it was real and it was striking. We laughed. He asked me my name, shook my hand and said that it had been a pleasure to meet me. I walked away from one of the best fan experiences of my life because it felt genuine. I was on Cloud Nine all day afterwards. 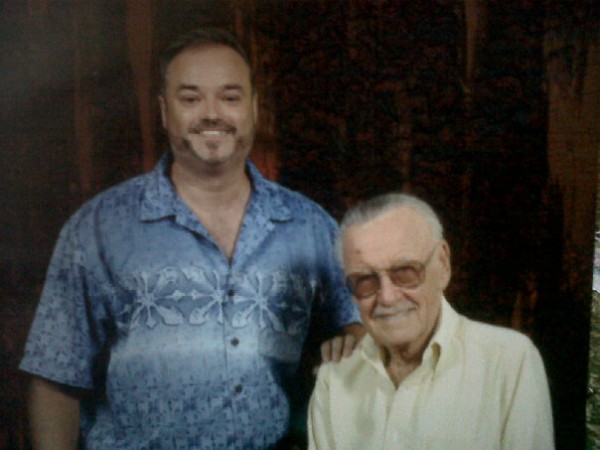 A lot of us “true believers” have similar stories. We’ve met him, shaken his hand, and even interviewed him hoping that his magic, his ability to make us believe would somehow rub off onto us.

In a New York Times article, Brian Michael Bendis recounted several of his meetings with the Man Himself. The first time, he called Bendis a schmuck. The second time, they watched the movie Spider-Man together. The third time, he learned about Lee’s failing health and Bendis actually whined to him about his job issues. But it was in this last meeting when Bendis saw Stan smile and actually enjoy listening to his publishing problems. It was evident that Stan missed the work. How real.

Bendis clearly has his own magic in creating mainstream American comics, but in this moment, it was the love of the reality of the work in all its glorious mundanity that was rubbing off onto Bendis.

This is Bill Sienkiewicz’s recollection of sitting on a panel with Stan:

“Years ago, I was on a creators’ panel with him; a panel I had not been slated to do. Beforehand, I was approached by one of Stan’s intermediaries and told Stan requested I join him with the others onstage (and when Stan Lee asks you to sit beside him on a panel, you don’t refuse). Stan was a true gentleman, charming, effusive, but surprisingly soft spoken. He told me that even though he wasn’t tending to the day-to-day running of Marvel, he was aware of my work, found it “exciting, challenging, and vibrant- kind of crazy, but in a wonderful kind of way. That floored me.

“When the panel began, Stan turned up the dial from ‘Stan Lee’ to ‘STAN LEE!! Showtime!’ The hall-which was already abuzz, suddenly crackled with another level of excitement. He was ON. I honestly don’t recall much of what we all talked about, or if I offered anything of value to the panel. I think I probably just sat there grinning and watching Stan be Stan. The Man.”

The wizardry of Stan was that being Stan was his magical power. Just being Stan, in real life, was enough to make you want to believe in the power of comics. Stan himself used to be embarrassed that he was a comic writer. Then he recounted that it was entertaining people that helped them get through their own realities. It was a realization of brilliance.

He was respected and loved, even by the Distinguished Competition.

“Stan Lee is the reason why I love comics. Words cannot capture the effect he and his work left on me. He was loved, and will be sorely missed, but his impact will last forever.”

Tom King wrote: “As a tribute to Stan and his immortal ‘Stan Lee Presents’, I always tried to put a ‘DC Comics Presents’ before my titles. I told him this once. He nodded, patted my back, and said, ‘Forget that, kid. Just write for Marvel.’”

Even when Stan was just being Stan, the magic was all around him. Even as fans, we knew it was more than just celebrity, it was a permeable power, an effusive energy that captured all of our attentions.

The second time I met Stan Lee, it was at a signing. There were no photos allowed but I had a secret weapon. I had my then 8-year-old daughter. It was particularly poignant because she was meeting him at the same age I was when I first read the words “Stan Lee Presents.”

We approached his table and he graciously signed my books. Helena then said hello and it was clear that Stan was captivated by this precocious little thing wearing a Marvel t-shirt and talking about his comic characters with such joy. I asked to get a picture.

To my surprise and happiness, Stan enthusiastically agreed! “For the princess? Sure!” Helena posed and with a cheery “Excelsior!”, we were off. I wouldn’t meet him again for another few years, but it didn’t matter. Stan Lee met my daughter and I was struck by the notion that two of my heroes were in a picture together. 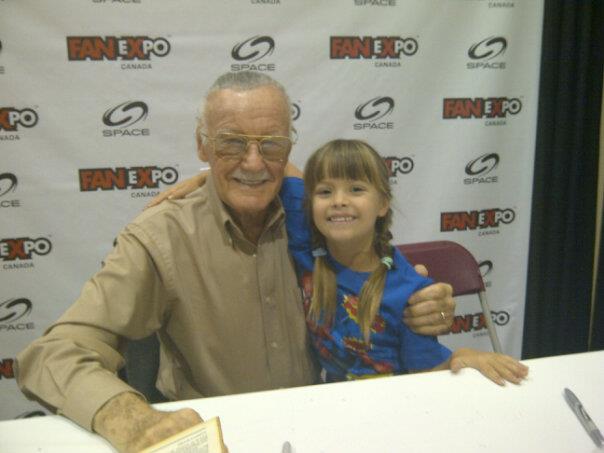 Like I said, the man continues to make more stories.

In fact, Fan Expo Comics Coordinator, Kevin Boyd just related this great story to me tonight. He remembered an event when he and Stan were together backstage.

“It was clear that Stan had been taught a memory trick for remembering names. He’d ask your name and then he’d say ‘Kevin. Nice to meet you, Kevin. It’s great to be here, Kevin.’ He’d say it a few times and repeat the process with everyone in the room. By the end of the event, Stan had remembered everyone’s name. The resulting effect was that if he saw you pass by, he’d say ‘Hey, it’s my friend, Kevin.’ And then you’d walk out of the event with the knowledge that Stan Lee knew YOUR name.”

Stan Lee may have been a showman, but he was a showman who knew the importance of showing reality. The best magic is when you know the trick is real, and that’s how he was able to make believers out of us all.

I don’t know what comics are going to be like without Stan. Even up to his last couple of years, Stan was an ambassador and figure known to even non-comic book fans. Everyone knew about this guy who rose up through the ranks of comic publishing from being a mere gofer at Timely Comics to reigning supreme as the Publisher Emeritus of one of the most prolific comic publishing houses in the world. Stan’s presence was always a factor behind my comic reading and I would constantly wonder what he would think of the new directions.

The last time I met Stan, I was primed to interview him. I was being granted five minutes. I approached him and his handler. Stan was seated behind him and looked up at my eager face.

“Hi, Guy!” He shouted. Even at 93, he was still exuberant. His handler asked me who I was and I told him.

“We’re not doing small press today. Forget it.” He said, cutting me off.

Stan reached over and shook my hand.

It had a funny quirk to it, but it was the last time I’d seen him and remains one of the biggest regrets of my writing life.

Stan’s last interview was with The Daily Beast. You can read it here. The last thing he said in that interview was probably the best thing we can remember him for:

“I don’t miss the signings. I miss the creating. And that’s the writing I’m waiting to do.”

It’s an interesting way of putting it… “The writing I’m waiting to do.” This was last month. At 95, Stan still wanted to create. His legacy will continue and in the days after his death, more anecdotes and more stories will come out about his life, his career, his loves and most importantly, the memories of those lucky people who were able to meet and spend time with him.

And you know, we’ll want more of it. We’ll still look for his cameos in the films, CGI echoes of his life. We’ll still buy Marvel Comic books and wonder what he would think. The post-Stan Lee era of comics will still go forth with his presence and his inspiration.

The wizard isn’t gone; he’s just waiting to create again. We won’t get to see him do it but his magic will continue.

Excelsior, Stan. Thanks for giving me, my kid, and the world some much-needed magic in a day and age that could use it.