REVIEW: ‘The Fifty-Year Mission’ takes you where no Star Trek book has gone before ★★★★★ 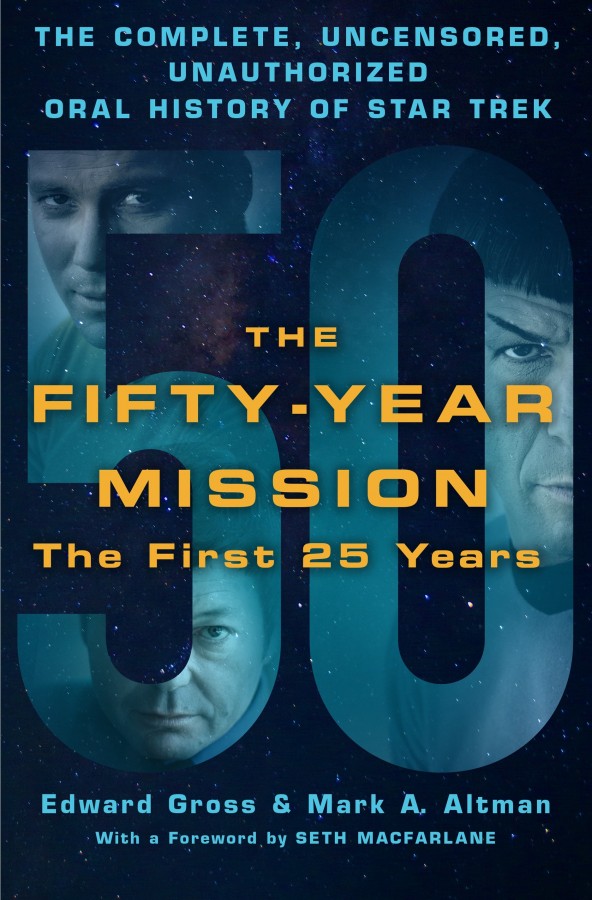 You know, I’ve spent the last five years of my life writing about my lifetime love and appreciation of Star Trek as well and have interviewed numerous Trek celebrities and passed on my love of the phenomenon to my children. When I was a kid, there was nothing I didn’t know about Star Trek.

But then there’s a new Star Trek book, The Fifty-Year Mission – Volume One: The First 25 Years (Thomas Dunne Books/St. Martin’s Press) by Ed Gross and Mark A. Altman. Gross is a journalist who has written about films, television and has covered more Star Trek in his career for more years than I will ever get to. Mark A. Altman has the distinguished recognition of being the world’s foremost ‘Trekspert’.

Still, let me make a confession: I want in on their worlds. I mean, I’ve watched Star Trek ever since I can remember figuring out how to turn on a television. In my pre-teen years, I read James Blish’s wonderful adaptations, Star Trek: New Voyages, Susan Sackett’s wonderful collection of fan letters and vigorously researched the background histories of my favourite Trek actors. Hell, I wanted to be adopted by the Trimbles. In fact, seeing magazine photos of the cast of the original series sitting on the tarmac in front of the Palmdale Manufacturing Facility for the unveiling of the proto-type space shuttle Enterprise was one of my most vivid memories in my pre-adolescent years. To me, that was a melding of the fantasy with the relevance to real life, and in my young mind I saw Star Trek as not just a science fiction television story but as a possible harbinger of what the future may yet bring.

It seemed so real, and reality is what dedicated fans pursue in their devotion and exploration of their respective fandoms. It’s not enough to delve into the fantasy; it’s not enough to be declared the in-house trivia genius and resident expert of whatever series or story you follow – a fan craves as much reality as he or she can draw from their passion and imports that into their lives in order to justify the love. Following a fandom is a not simply a passion project, it is the search for hidden relevance to apply to one’s own life.

That’s what I’m currently doing right now as I read The Fifty-Year Mission Volume One: The First 25 Years by Gross and Altman (Thomas Dunne Books/St. Martin’s Press). Mark Altman is the writer of the cult Trek film Free Enterprise as well as a former journalist and writer/producer for a number of TV shows, including Castle and Agent X. Ed Grossman is a prolific writer and editor with credits for many non-fiction books as well as writing about Star Trek for more than 35 years. If there was anyone who would know the realities and behind-the-scene secrets about Star Trek, it would be these guys.

When you first behold this cornucopia of Trek anecdotes and personal recollections, you are struck by its immensity. It is incredulous to believe that one would be able to read a book of its size with ease but Gross and Altman have done a painstakingly good job of curating this collection of reminisces. Arranged chronologically and thematically, the anecdotes are short and succinct so that it is far from a laborious task to read this book; it is more like the literary equivalent of hanging off the words of a fascinating guest at an evening social. Before you know it, the evening is almost over and you are suddenly struck by a longing to hear more.

… And that’s only Volume One.

A foreword by Family Guy creator Seth McFarlane gives you an idea of the cult phenomenon relevance this book has. McFarlane shows himself up as a hitherto undeclared Trekker and aficionado of the holy word of Roddenberry by adopting the persona of an obscure Trek character. I won’t deny readers of the joy of discovering the identity he adopts in his opening remarks. It’s a wonderful introduction that invites the reader to enjoy the behind-the-scenes view this book promises but also validates the reason for collecting the stories.

In an amazing shift of perception, these are the words of the people you don’t normally hear from that imparts that degree of reality that devotees are searching for. Every word is a pearl – every sentence a string in which you lovingly assemble, trying to imagine the voices of the speaker and knowing that you are privy to a rare collection of inside gossip, admonitions and admissions that you would never imagine learning. This book puts one on the inside scoop and learning privileged information from notables like Robert Justman, David Gerrold or Samuel Peeples – people a fan would never imagine hearing from – it’s a mind-blowing prospect and a must-have encounter for any loyal fan.

But then there are the observations and opinions from the frontline personalities. When a reader learns from Gene Roddenberry himself how hard he fought for the Spock character to remain a centre feature role, he gets a renewed sense of appreciation for Roddenberry’s creative drive. It’s not enough though to hear this from Roddenberry’s perspective, you also get to read about the same issue from the peripheral perspectives of his colleagues and trusted friends. It’s a complete and vivid portrayal of every single issue that the creators in first 25 years of Star Trek’s existence have ever had. This book is a collection of truly wondrous retrospective experiences to be able to understand what the creative process behind this monumental show was like. It’s like a front row berth in the coolest time machine ever.

Above all though, it’s the historicity of this Star Trek book that really stands out. For instance, when you learn of the individual reactions to the release of Star Trek: The Motion Picture at the time and compare those appreciations to the modern artistic appreciation of its merits, it develops a whole new appreciation. In fact, this is the measure of the historical accomplishment of this book: to be able to bear witness to those individuals who were there yet were not aware of the vast cultural implications their work would have. This is the real stuff behind Star Trek that devoted fans would love but that casual ones would appreciate as it allows them to reinterpret the film in a wholly different way.

Though I pride myself on my knowledge of Star Trek, there’s no doubting that I didn’t learn something from this comprehensive and in-depth testament to those people who laboured to bring this wonderful franchise to the world. What’s different about this book is that it pays credit to the people we don’t normally hear from. Though the celebrities (Shatner, Nimoy, Koenig, Takei, et. al.) are given their voices in this book, we also hear from the production and technical staff as well. We hear from the writers like Jerome Bixby or the technical designers like Doug Drexler – it’s an amazing tapestry of creative talent and opinion that marks this as a rare collection that is properly timed as we experience Star Trek’s 50th anniversary.

This is more than likely to be the hot book of choice to pick up at SDCC, Star Trek: Las Vegas or Star Trek: Mission New York.

This Star Trek book is a bible for fans that will become an indispensable reference resource that documents a personal history of the franchise. It’s the personal connection that will make this book a success and will enhance that sense of real connection to Trek that all fans will want to experience.