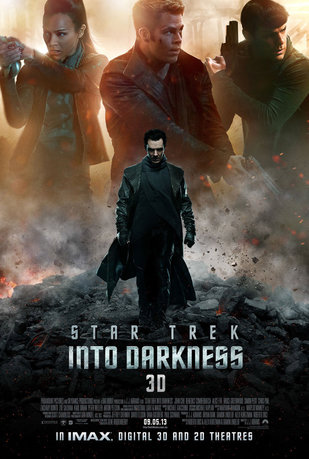 J.J. Abrams’ first Star Trek reboot was at once a prequel portraying events before the USS Enterprise’s maiden voyage and also a genuine reboot in both form and content. It was a remarkable achievement in that even as it paid homage to the original series and films in numerous ways, it was a fresh creative vision that injected a walloping dose of adrenaline to the financially flagging Star Trek franchise without sacrificing the human element or the chemistry between the characters we know and love (unlike a certain other film franchise that also has “Star” in its title).

The same elements that made Abrams’ first foray into Federation space so fresh and exciting – the kinetic energy, the sleeker production design, the awesome visuals and sound – are all present in Star Trek: Into Darkness, but Abrams and crew have upped the action factor even more to the point where it’s almost non-stop mayhem from beginning to end. Because of this, the only characters the movie has time to develop are Kirk and Spock (though given the breakneck speed at which the film moves, it’s a wonder the writers were able to work in any character development at all).

The more I reflect on the film post viewing, the more my feelings about it become mixed. On one hand, I had a blast watching it. For what Abrams is trying to accomplish, which is bring the Star Trek lexicon to both a broader and a younger audience, it is supremely successful.

On the other hand, it veers even further away from what made the original so great. The speculative science,  political commentary and philosophical conundrums that made Star Trek the last great pop cultural franchise for nerds of a more highbrow caliber are only given lip service here. There was also – for me, anyway – a deeply spiritual quality to the original series and films that Into Darkness, screaming through space at warp speed as it does, just doesn’t have time for. After all, speed, by its very nature, is anathema to spiritual contemplation.

One thing I can say that I am glad to see gone, however, is some of the cheesiness that marred the otherwise highly intelligent and mature writing of the original Trek. Consider, for instance, Picard and Worf singing Gilbert and Sullivan while pursuing a malfunctioning Data in Star Trek: Insurrection. There always seemed to be at least one or two such cringe-worthy moments in the original films (though not in the TV series and spinoffs) that, while intended to accentuate the lovability of these characters, just made them look kind of silly.

Loyal, diehard fans of the old Trek who didn’t appreciate the direction that the first film took will find plenty more to dislike in Stark Trek: Into Darkness. As a fan of both the original and the reboot, I do find the arguments of the reboot’s detractors valid but, in all fairness, the very reasons why they don’t like the reboots is what makes these films, for better or worse, so commercially successful. And the simple fact is that unless the Star Trek films make money, studios will cease making them entirely. Purists will pout, but I, for one, am okay with a bit of compromise if it means being able to see more of these characters whom we all love.

Make no mistake: Into Darkness isn’t quite Star Trek: The Next Generation. But it is Star Trek for a new generation.[subscribe2]