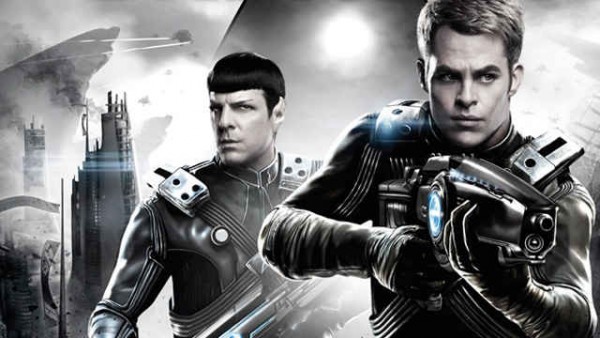 With Star Trek, the game, Digital Extremes set out to boldly go where no one has gone before…!

Um…that is, unless that one is Gears of War, Uncharted, DeadSpace and even Batman: Arkham Asylum. Which isn’t always a bad thing, right? I mean, it’s standard industry procedure, Video Game Making 101, to take a bit of what’s popular here and there and try to adapt (or improve upon) that winning formula to suit the title you’re developing. Sometimes, in cases such as, say, Darksiders, you strike proverbial gold and the pieces just fall together seamlessly. And then there are other times when the game in question just isn’t a Ferengi fart in the wind compared to those other titles that they so shamelessly “borrowed” from. Unfortunately, we’re dealing with the latter here.

Now, critiquing this game is a bit difficult for me as I’m of two minds on the subject. This is much like the game itself, which allows you to take control of the bold and brash Captain James Tiberius Kirk or the cold and calculating Vulcan, Mr. Spock. They like to tell you that the game is a completely different experience depending on which of these highly contrasting characters that you choose. Well, they lie. This is first and foremost a co-op (AI or with another player) cover-based 3rd Person over-the-shoulder shooter regardless of whom you choose, and the play through is virtually identical aside from one or two little abilities here and there. My thought process while playing it couldn’t have been more divided though:

The Trekker in me (or the Kirk persona, as I call it) was as giddy as a schoolboy to embody these classic characters that I’d grown up with, watch their interactions and witty banter that felt so true to Trek, walk around the bridge and decks of the Starship Enterprise, issue commands to Mr. Sulu from the Captain’s chair, bicker with Bones in sick bay, and know the joy of having Mr. Scott beam me down to a hostile alien planet with an away team of expendable red shirts. As a lifelong fan, this game was the Star Trek sim that I had been waiting for ever since all my little action figures “beamed down”(dropped) from my enormous toy Enterprise to seek out new lands and civilizations in the sandy lots of my local playground.

Now, the Gamer in me (or the Spock persona) had no choice but to judge this game from a technical standpoint. And oh, was it left wanting. As far as current gen technology goes, the graphics are poor. No, I mean poverty level. If I were to say that this looked like a launch title, I think that might be a bit too kind. Sure, the character models captured the mo-capped likenesses of the cast to a T… as long as there’s no movement or animation. Looks great in screenshots, though. And speaking of characters, your AI-controlled partner, who is absolutely integral to you getting virtually anywhere in this game, apparently has the mental faculties of an ADD-addled chipmunk. Not to mention that the gameplay is a glitchy, muddled mess. Sure, they throw in a few curve balls in an attempt to spice up the massacre of wave upon wave of very similar-looking lizard antagonists (which we Trekkers will recognize as being revamped versions of the iconic Gorn), such as several on-rails zero-gravity and squirrel suit flight segments and an abysmal segment where you man the turrets and photon torpedoes of the Enterprise herself that, after dying innumerous times, I honestly couldn’t tell you how I eventually managed to beat.

So at the end of the day, all fanboy geek-outs aside, it’s a “one shall stand, one shall fall” type scenario here. And unfortunately, the gamer in me wins the day (“Damn it, Jim, I’m a discriminating gamer, not an adulating fanboy!”). As so very badly as I wanted to passionately LOVE this game whose development I‘d been following for what seemed like light years, I’m afraid that my final reactions have left me feeling like quite the Vulcan, thinking only “This is highly illogical, Captain.” [subscribe2]

Patrick Renfrow has no literary training whatsoever. In fact, if he manages to string more than three coherent words together, he deems it "prose". But as a rabid gamer and self-proclaimed pop culture savant, he has found a home among kindred souls on Pop Mythology.