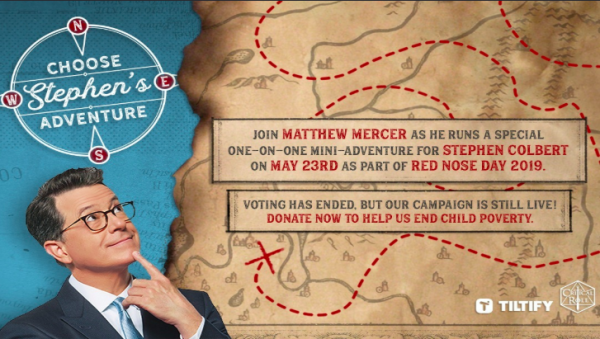 For Red Nose Day, Matthew Mercer and Stephen Colbert played D&D together this week in a one-shot adventure to vanquish the fiendish foe of Child Poverty and to recover … The Crimson Orb of Generosity!

… And it actually saddened me that I couldn’t play with them. Did you ever feel an instant kinship with someone you’ve never met? Cue longing sigh.

Matthew Mercer is in brilliant form as he shows his storytelling versatility in this cleverly arranged adventure that ties both fantasy and fundraising together. As the Game Master his loyal fans know him to be, he not only provides Colbert with historical background to the evolution of Dungeons & Dragons, but entertains the late-night television host as he takes his Half-Elven Bardish Rogue and companion bee (yeah – a bee), Eric, on a quest to defeat an evil mage and recover the Crimson Orb!

Daring tests of skill, monstrous enemies and love of adventure all feature in this story as it helps to raise money to combat childhood poverty, and that’s enough of a reason to watch it. But it’s also just great to see Stephen Colbert wax nostalgically about his history of role-playing games. He played “Metamorphosis: Alpha” in his youth; one of the inspirations for TSR’s “Gamma World” and one of my favourite games in the past as well.

It’s the look on Colbert’s face that really strikes a chord in me, as he remembers his glory days of dice-slinging and spins stories about his friends arguing about whether they can listen at a door – a tried and true tactic in adventuring – to hear giant rats! At once, millions of nerds now have a new connection to this talented entertainer.

Of course, the adventure has an ulterior motive: to inspire people to become adventurous heroes in real life. The fan base of Critical Role has distinguished itself by its amazing generosity and everything it touches turns to gold. Raising money for such a noble cause will undoubtably yield incredible benefits and even though Stephen and Matt’s adventure has ended, the chance for people watching the video can still live their own adventures in generosity by continuing to donate at www.critrole.com/rednoseday.

Find your own Crimson Orb of Generosity and wear it with pride as you take up arms in the quest to rid the world of this dreaded enemy!