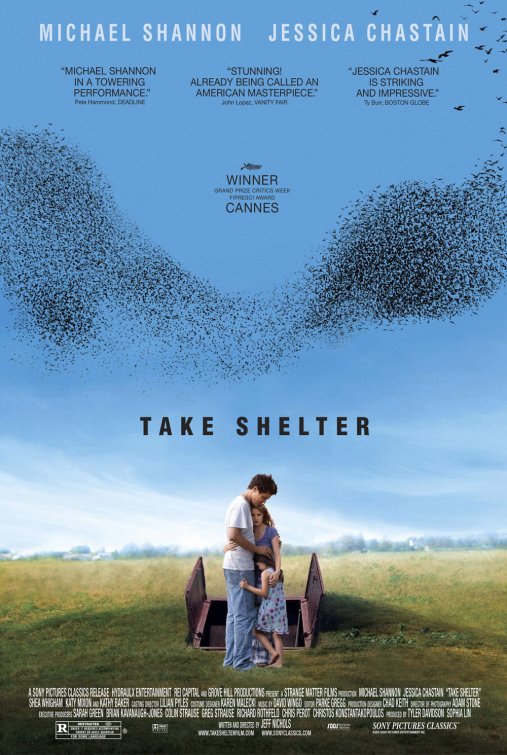 Take Shelter reminds me of some of the best films from what I consider to be the golden age of horror cinema, the 70s (roughly) in which the emphasis on character, story, plot development and subtlety always superseded shock and gore, so much so that viewers accustomed to the pacing of today’s horror may find the masterworks of that era to be exceedingly slow.

While not a horror movie per se, there’s no question that Take Shelter borrows liberally from the horror genre’s bag of tricks. And like The Road, another technically non-horror film, there is an underlying sense of dread and foreboding here that’s far more sophisticated and true-to-life than most of what passes for horror these days. It strums the chord of anxiety that drones under our veneer of first-world prosperity.

Though it could be taken literally as a tale of apocalyptic doom, Take Shelter works best as an allegory. The storm that our protagonist, Curtis (Michael Shannon), seeks to take shelter from is an amalgam of various fears both personal and collective. At the personal level it represents the fear of severe mental illness and of the emotional turmoil and separation that occurs as a result of it. At the collective level it represents impending economic or environmental collapse, both of which are alluded to in various ways throughout the film.

It’s also a portrait of the intense loneliness and ostracization that comes with both mental illness and also with being the only one in your community to see the warning signs of approaching financial or ecological disaster while everyone else remains oblivious.

“There’s a storm coming like you’ve never seen,” Curtis shrieks hysterically at a roomful of people, “and not one of you is prepared for it!”

They clearly think he’s crazy, and what’s at once so unnerving and tragic about his character is that for most of the film, we’re not sure if he is or not either.