TELETOON at Night ushers in Season 6 of ‘Archer’

Sterling Archer has to be the most reprehensible secret agent in the history of the genre. Still, as this is a comedy, there’s a lot to be forgiven and to laugh at. The usual punchline at the end of every show is that everything seems to work out for Archer in the end, and essentially everything is forgiven as we impatiently wait for the next episode of zany escapades to begin.

One of the appeals of this animated show is the vague time setting. The featured technology is a mix-up of eighties and contemporary espionage gadgets that are reminiscent of classic Bond movies and anything that could be used by today’s military forces on CNN. That appeals to an older age of viewers but the level of zaniness meets a variety of appropriate aged generations.

Of course, the double-entendres and catch phrases (like “phrasing” uttered at the end of every double entendre) are truly hilarious. Every goofy situation Archer finds himself mixed up in almost always has some sort of sexual overtone. 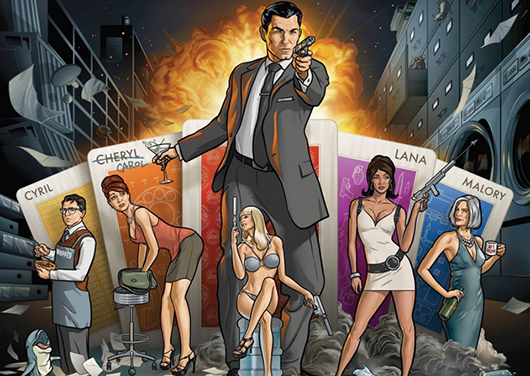 Archer is suave, debonair, a seeming idiot savant when it comes to militaria, espionage and a random assortment of obscure subject areas that boggle the mind (do you know how many fathoms there are in a league?). Yet when it comes to relationships, casual or otherwise, Archer is an egocentric, misogynistic alcoholic playboy tinged with narcissism and severe mother issues. Of course, it doesn’t help that his mother, Mallory, is the head of the covert agency he works for.

Speaking of his mother, Mallory Archer is a product of the Cold War environment that most of the Archer audience would have grown up in, and that younger audience viewers would find fascinating. She is a classic spy-mistress with a shady background and links to the Vatican, the KGB, the CIA and governments all over the world. Her expression of maternal love ranks slightly lower than the affection she maintained for one of her poodles as her son languished in the most expensive boarding schools in the world. Of course, this plays heavily into the comedy action whenever she sends her dossier-losing son out on a mission.

The rest of the cast is made up of Archer’s past girlfriend and super-spy, Lana Kane; Accountant, Cyril Figgis; Logistics agent and gay voice of reason, Ray Gillette. Pam Poovey is the hapless human resources director; Krieger is the head of science and technology (and possibly Hitler’s clone?) and Cheryl is Mallory’s vacant, billionairess secretary.

Kane knows of Archer’s past and foibles and yet is still able to work with him despite his faults. If you wonder why she continues to put up with him, my theory is that it’s something to do with the concept of the devil you know. The comedic chemistry between the two characters provides for tons of laughs.

The Season 6 premiere is being played on TELETOON at Night on Jan. 8th at 10pm (ET/PT). Fans are invited to take part in a social conversation on Twitter during a special live-tweeting event during the episode on Thursday night between 9:30 pm to 10:30 pm ET using the #Archer and #toonatnight hashtags.

If you haven’t seen this show, then this is the time to catch up and get ready for Season 6. It will blow your mind.