The 5 best bowling movies of all time

I love bowling. Many of my best high school memories happened during the three seasons I spent on the school’s bowling team. Hell, I was the junior varsity bowling team captain… for a week. Before an angry tirade demoted me to co-team captain  (but still a captain!). Even my first two girlfriends were high school bowlers. Although it’s been several years since I last hit the lanes, and even more since my ball, Keyser, left its bag, I still love bowling.

It’s the only sport in which the best players can eat a burger and drink a beer between each turn (or in my case, a Kalihi Bowl fruit punch made of some additive combination of sugary syrup and probably meth). It’s the proverbial sport that is easy to play but impossible to master. It’s the one place where the phrase “I’m going play with 16-pound balls” makes sense. It’s the most egalitarian of athletic contests, where full-hook power-throwing heavyweights and granny-goosing 90-pound 12-year-olds can have a shot-for-shot barnburner. It is drama waiting to happen.

Yet, movies featuring bowling are extraordinarily rare. Sadly, the majority of bowling movies are lowbrow comedies such as King Ralph or She’s Out of My League, limited-appeal documentaries like League of Ordinary Gentlemen, or whatever the hell Sorority Babes in Slimeball Bowl-O-Rama is. Still, there are some that not only feature this great sport but are also great films. They may not be great because they include bowling, but it helps.

Likely the most bowling of these movies, as the entire plot is based around the lanes, the Farrelly Brothers’ second film (flanked by Dumb and Dumber and There’s Something About Mary) solidified their brand of gross-out, tasteless humor long before that particular type of comedy was killed, buried and then repeated sodomized by the likes of Aaron Seltzer, Jason Friedberg and later Farrelly Brothers movies.

Kingpin takes the sport of bowling to absurd ends, from Woody Harrelson’s rubber-handed rolling to a passing joke about the condition of “all these great athletes,” but it’s Bill Murray’s exuberant performance that steals the show. Kingpin may not be a great film, but for those of us who it appeals to, it’s great fun. Or as my brother once put it, “There are two kinds of people in this world: Those who like Kingpin and those who don’t.”

Before becoming the dream of every straight woman in America, Ryan Gosling starred in this quirky indie movie about a sweet, socially inept man who has a relationship with a sex – err – real doll. Although Lars and the Real Girl didn’t make a profit during its initial theatrical run, critical response, including an Oscar nomination for Original Screenplay, was enough to earn it cult status.

In a pivotal scene, Lars is shown bowling with a group of townsfolk, which, while friendly, exacerbates his anxiety. The sport serves as the exact kind of fun, bonding social experience that Lars’s condition causes him to miss out on, bringing out both his fear of interaction and possible hope for recovery.

All right, this one’s a bit of a cheat. Despite its title, Michael Moore’s polemical documentary on America’s gun obsession includes only stock footage of bowling. Yet the sport plays a key role in the catalyzing event as the Columbine shooters were supposed to be bowling at the time they were murdering their teachers, classmates and ultimately each other.

Since the incident, the term “Columbine” has transformed from a flower or a small Colorado town into shorthand for the kind of senseless mass violence that has become ever more rampant in American society (sadly, this usage has since been over taken by “Sandy Hook”). With recent affords to curb gun violence side-swiped by gun lobbyists, manufacturers and the politicians they control, it looks like Bowling for Columbine will become a monument to  a time when such mass slaughters were actually shocking. If only these kids had gone bowling instead.

As both a bowler and a certified minister in the Church of the Latter Day Dude, I too am surprised that the Coen Brothers’ stoner-bowler classic is only number two. Jeff “the Dude” Lebowski is the patron saint of slackers, the lord of laggards, the Pope of underachievers, the… eh, you get the point. The Coens craft a world so perfectly suited to The Dude that he literally ties it all together, like a well placed rug.

Jeff Bridges, John Goodman (here redeeming his previous misstep in bowling cinema) and Steve Buscemi turn the bowling alley into a refuge, the place where pacifist and pedophile are just fellow bowlers. Despite all the insanity and strands in old duder’s head, the alley is always there, waiting, abiding. Whenever life seems overwhelming all we have to do is remember the immortal words of Walter Sobchak, “F**k it, Dude, let’s go bowling.” 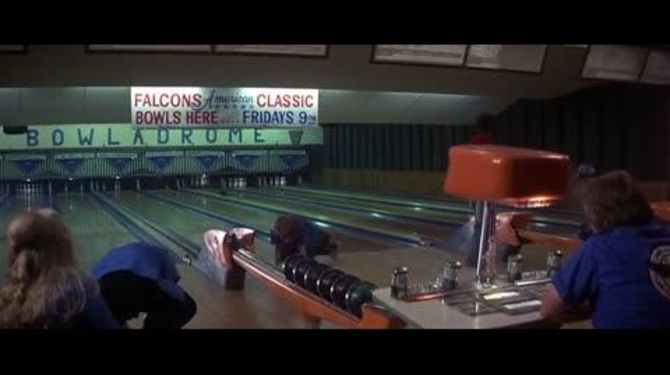 Yes, Michael Cimino’s Vietnam War masterpiece does include a bowling scene. Although most remembered for its prisoner of war and Russian roulette sequences, The Deer Hunter uses bowling as a symbol of the simple, comfortable concerns and casual recklessness that Robert DeNiro’s veteran no longer sees as worth investing in. While coping much better than his brothers-in-arms, Michael’s experiences in war render everyday worries meaningless.

It may only be one quiet scene in an intense three-hour epic, but it’s these little moments of real life before and after the traumatizing experience of combat that make Deer Hunter such a powerful film. Although it may be debatable as the “greatest bowling movie,” it’s definitely the greatest movie to include bowling.

Did we miss your favorite bowling movie? Sound off with your comments below!