The Apocalypse Book Club: May Selection – ‘The Sirens of Titan’ 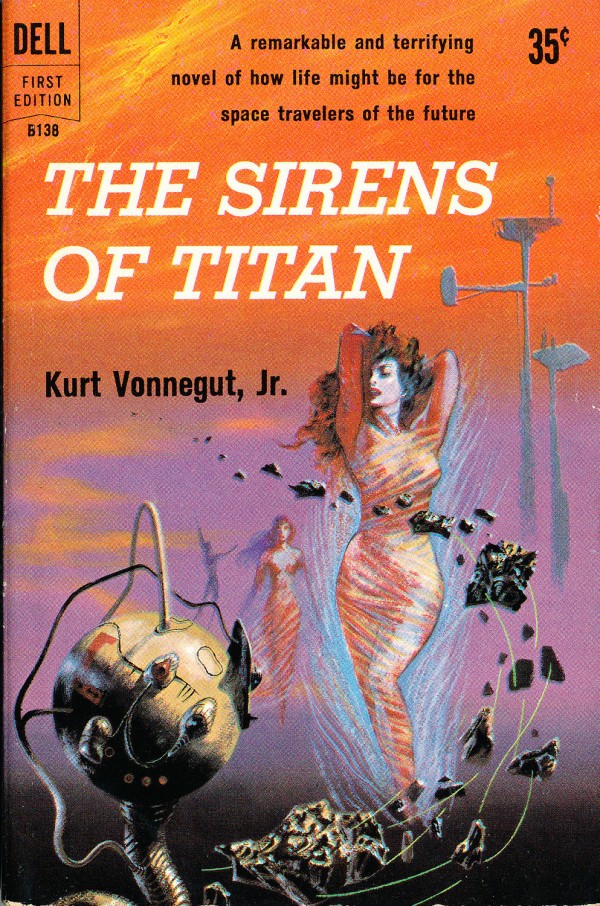 The Apocalypse Blog Book Club picks a different dystopian-themed novel to read each month and has an online discussion, as well as an in-person meeting in Milwaukee. Different club members will write reports on our selections each month for Pop Mythology. You can find more on the club and join here: teakrulos.com/the-end/

“I was a victim of a series of accidents, as are we all.”

― Kurt Vonnegut, The Sirens of Titan

Kurt Vonnegut. A name that is instantly recognizable, and even someone who may never have personally explored his works knows that the name holds great weight. Vonnegut is the author of acclaimed Slaughterhouse-Five and Cat’s Cradle. Upon perusing responses to his second book, The Sirens of Titan, it becomes apparent that many fans hail this early work as his greatest of all, while other’s feel that it pales in comparison to his well-known novels.

I can’t speak to its rightful place in the Vonnegut lineup as I have not read his entire catalog. What I can say is that I appreciated the time I spent in the pleasantly absurd world that Vonnegut presents in Sirens of Titan. However, once will be enough and it is not one that will call me back time and again.

The themes explored in Sirens of Titan are common, especially in dystopian or totalitarian storylines. How does one go about manipulating and uniting humankind? Fear of others, suppression of free will, guilt over societal misdeeds, consolidation of power, blind devotion to a belief system (such as the Church of God the Utterly Indifferent). Despite the redundancy of these themes, Vonnegut’s sometimes-scattered sci-fi presentation seemed anything but, especially for a story written in the late 1950’s.

At times, it feels as if Sirens of Titan is exploring too many storylines at once as the reader struggles to hold footing. Was it Vonnegut’s prerogative to keep his readers confused and on their toes? An entire world could be built upon the beautiful and evolutionarily-basic “harmoniums” that live on planet Mercury, and emote based on the musical notes that they experience.

Pieces of brilliance for sci-fi written nearly sixty years ago were riddled throughout, such as the ‘goofballs’ that allow those who take them to receive oxygen through the bloodstream, while bypassing the lungs, thereby allowing the recipient to ‘breath’ in any atmosphere.

Once the end of the main character’s (Unk aka Malachi Constant aka space wanderer) journey was reached, I was left feeling that there were a lot of loose ends that were not tied up. The fate of those on earth did not receive closure, and the actual ‘Sirens of Titan’ were a bit disappointing when their reality was revealed.  I found myself craving to know more about the illusive Rumfoord’s travels through time and space, and the extent of his reach.  Was a divine spirit influencing Winston Niles Rumfoord, who some viewed as an oracle, or was it actually the beings from planet Tralfamadore (whose story line seemed a bit hastily thrown in at the last minute, but will make a future appearance in Slaughterhouse-Five), or simply a way for Rumford to pass the time playing practical jokes on simplistic humans?

Expect a bumpy, overflowing page-turner that may leave you wanting more. The world that Vonnegut painted was intriguing, and could have been expanded into an entire series or separated into books of their own.  I found it both a joyous romp through time and space, as well as a poignant commentary on the gullible fallibility of humankind that felt particularly on point in today’s social and political climate, though the words were written almost sixty years ago. If you are like me, you may find that some expertly-crafted passages demand to be re-read, while others leave you scratching your head, and still others have you asking yourself universal questions in a new light.

So if you read this book, sit back and simply enjoy it for what it is – brilliant prose that leads the reader on a sometimes-nonsensical journey with a heaping serving of sci-fi and world domination.

Jacqui Castle works as a journalist in Asheville, North Carolina. Her dystopian novel The Walls Are Closing In was recently successfully funded on Inkshares and is in production for a 2018 release date.

About The Apocalypse Blog Book Club

The Apocalypse Blog Book Club picks a different dystopian-themed novel to read each month and has an online discussion, as well as an in-person meeting in Milwaukee. Different club members will write reports on our selections each month for Pop Mythology. You can find more on the club and JOIN HERE.
Copyright © Pop Mythology 2022, All Rights Reserved