REVIEW: ‘The Art and Making of The Flash,’ an amazing insider’s look at the show

The Flash has got to be the hottest superhero show on television right now. With the exception of its parent show, Arrow, there’s nothing that comes close to the actual comic feel of the episodes that producer/creator Greg Berlanti has gifted to DC Comics fans. Of course, Berlanti also created Arrow, so in the case of The Flash lightning definitely does strike twice. So it falls to a talented writer like Abbie Bernstein, who also wrote the The Art of Mad Max (which was reviewed on this site), to give loyal fans and Flash devotees the behind-the-scenes perspective of how all this comes together in Titan Books’ The Art and Making of the Flash.

First off, the foreword from Greg Berlanti is not only eye-opening but is an essential start to this book. We learn about his love of the Silver-Age Flash books, and his experiences with a grouchy comic store owner not only endear him to the audience of this book but also to legions of comic fans everywhere. This is a guy that comic junkies can immediately relate to, and this is the tone that a Flash­-lover wants to hear as she turns the pages and reads about the making of this iconic television show. 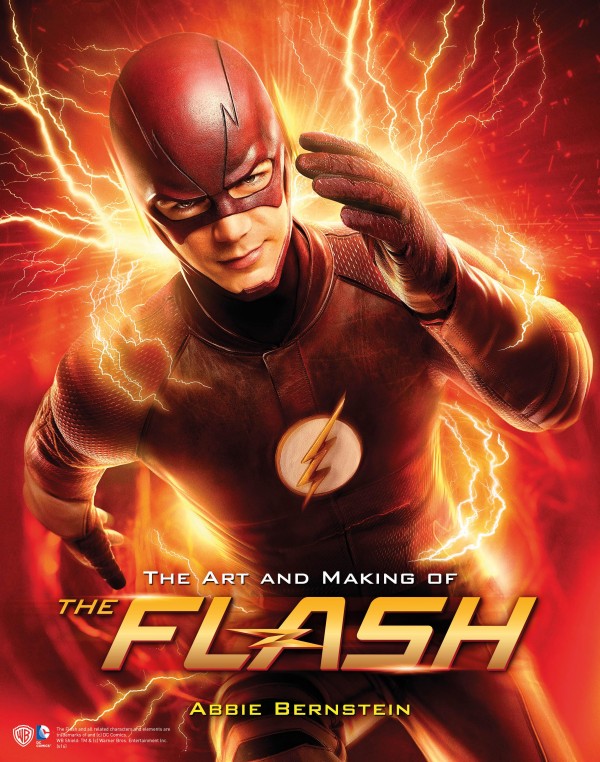 Divided into relevant and detailed sections that wonderfully illustrate characters, settings and detailed props and scenery, this book is an essential bible for understanding, exploring and savouring the various aspects of this fast-growing fan-favourite. I especially enjoyed the personal comments from performers like Grant Gustin himself who quipped that the Flash uniform was a “super-suit that was always a dream of his,” making it “the most surreal part of the experience”. With insightful and personal statements like these added to the candid and relaxed photos of the cast and production crew, fans will feel invited to be part of the filmmaking experience.

What more can you give to an army of slavering comic fans? How about interviews with the actors who play the central and supporting roles in the show? When a fan reads intimate and up-close comments from these actors, it’s a vicarious and near visceral moment that’s like a personal set tour or a meeting at a convention.

Comic fans will be particularly excited to learn of Geoff Johns’ involvement in the show. Of course, Flash fans know of Johns’ credits in creating the Rebirth run of The Flash which was instrumental in revitalizing this character for DC Comics. In fact, when Greg Berlanti relates his experiences in reading Crisis on Infinite Earths as a precursor for some of the major plotlines in this show, that goes far in solidifying the authenticity and legitimacy of the show. After all, Berlanti pretty much acknowledged his desire to keep the show as faithful to the comic as much as possible. That sort of accreditation goes far with comic fans who are eagerly searching the show for easter eggs and connections back to the beloved source material. Fans know their franchises better than the producers and you can be sure that they are looking for faults with a perception as sensitive as the finest tooth comb.

Gadgets and props are also a cool addition to the smorgasborg of details that this book boasts. Like a catalogue of goodies, this book allows fans closer looks at the various items that the characters use in their war on crime (or their pursuit of it). The construction parts in the costumes would be certainly interesting for cosplayers to replicate, and the comments by the costume designers and make-up experts lend further insight into adding accuracy for fan projects. The accuracy and attention to the fine points in The Art and Making of the Flash are not only entertaining but also amazingly useful on a practical level.

But it’s the photos that are incredibly expansive. The visual breadth of this book is truly staggering when you consider the combination of studio shots, candid photography and the even the technical graphics that are present in this book. It can only be described as a labour of love in presenting all dimensions of the television show.

Abbie Bernstein is a talented interviewer and that really shines through in this book. While the imagery is assuredly the book’s primary feature, it’s the context that Bernstein’s interviews with cast and crew provide that are the bedrock of its quality. From production designers and hair experts to CGI specialists and costumers, Bernstein leaves no stone unturned in getting to the very fabric of the show. The Art and Making of the Flash is about as authentic as an insider’s perspective can get.

In fact, when you consider the personal and passionate nature these creators have evinced in the pursuit of their work, Bernstein’s skill in evoking these insights and commentary is something to be envied. Surely, she must have enjoyed every minute of assembling this book.

Fans often forget about the production and hard-graft that go into creating a show like this. If you’ve been fortunate enough to go on a set visit, you see the storage, the inventory control, and the workshops where the engineers and other technicians struggle to repair, adapt and mount various pieces of equipment or props. Costume designers are frazzled by last-minute re-designs or fabric repairs.

Then there are the performers who have to deal with line changes and endless re-takes of the same shot over and over again. There’s a tremendous amount of energy that television productions require and Bernstein gives us a hint of all that in this book while still also celebrating the fact that the end product is the goal and is a celebratory one shared by cast and crew alike.

This is a book meant to be savoured and read slowly. The soft-cover format makes it very accessible and easy to handle. It isn’t bulky and can be taken out for a read elsewhere than your own private geek-spot at home. The wide-scale images are large clear enough to appreciate and give the reader that “fly-on-the-wall” feeling.

The Art and Making of the Flash is a must-have book for any TV viewer who is interested in the inner-workings of television production. It’s also a requirement for any fan girl or boy who loves not just the show but also the comic. This is reinforced by the personal connection and influence Greg Berlanti has for the comic super hero, something which Bernstein expertly reveals.