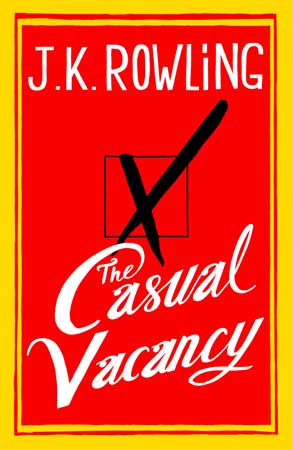 J. K. Rowling has picked up a machine gun and strafed across the idyll of English countryside life.  This is an adequate summary of Rowling’s first book since the Harry Potter series and may explain, in part, why it is number one on Goodreads “popular books started and not finished” list.  If you are among these many, though, I urge you to pick it up and give it another go.  Once you’ve managed to forgive Rowling for allowing Harry to grow up and move out of Hogwarts, you’ll find that The Casual Vacancy has quite a lot to say.

The story is set in the small, fictional English town of Pagford and opens with the death of one of the parish council members, Barry Fairbrother.  Pagford is in the midst of an acrimonious battle between political factions to offload a squalid neighborhood, teeming with drug addicts and suchlike, to a neighboring town.  Fairbrother, who grew up in this neighborhood called The Fields, was the lead proponent of the liberal set to keep the neighborhood part of the town, thereby allowing these disadvantaged children access to the superior schooling of Pagford.  His death represents a potential boon for the conservatives and sparks a covert war for his empty council seat.  During this adult fracas, the disgruntled teenaged offspring of the candidates hack the council website and anonymously air their parents’ dirty laundry, adding to the tumult.

In The Casual Vacancy, Rowling has written a grim, but very engaging story while managing to throw in a fair bit of worthwhile social commentary.  Her bias is clearly liberal, but it is not a blinkered one of “oh, these people just need a little helping hand and then everything will be hunky-dory.”  Instead, Rowling places personal choice and responsibility front and center in the book, but seems to argue that the help should be there for those who would avail themselves to it, despite the many that will spit on it.  Her own experiences with poverty provide her with an authentic voice in these issues.  The assorted internal family scandals that are revealed throughout the book also serve to remind the reader of the near-impossibility of truly knowing what is going on in a household other than one’s own, and thus to resist envy and/or judgment.  To misquote Erma Bombeck, the greener grasses over the fences of Pagford are absolutely due to leaking septic tanks.

For those who prefer film to books, it is worth noting that the BBC intends to release a miniseries based on The Casual Vacancy next year.  The story, with all its calumnies, should adapt well to TV, but I expect it will be a tad more acerbic than Downtown Abbey. [subscribe2]