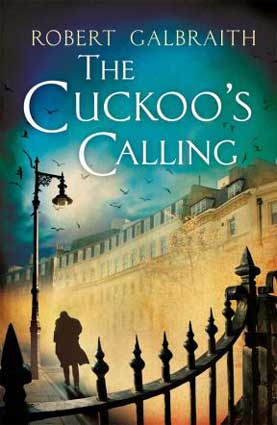 J. K. Rowling’s second installment since Harry Potter strikes a bit lighter tone than her previous work, The Casual Vacancy.  The Cuckoo’s Calling is a crime thriller, set in modern London, and was written under the pseudonym Robert Galbraith in an attempt by the author to have the work appraised on its own, rather than within the redolence of Hogwarts.

The story opens with the death of a famous supermodel, Lula Landry, from a fall off her penthouse balcony.  Suicide or murder is the question and, if murder, then who done it?  The local constabulary, presented in a typical Keystone Kop-ish, “can’t find their backsides with both hands” fashion, declares it a suicide on the basis of Lula’s train wreck of a lifestyle.  Her adopted brother doesn’t buy this, and hires a private investigator, Cormoran Strike, a war hero and illegitimate son of a Mick Jagger-like rock star and groupie.

Strike is our Sherlock Holmes and, similar to Holmes, proceeds about his investigation with a military precision and attention to detail.  Like Holmes he also has his Watson, a temporary secretary by the name of Robin, who has a background in psychology and harbors a secret childhood passion for detective work.  Robin has her definite moments of contribution to the investigation, however she often channels Watson’s air of a befuddled novice and seems to be a plot device for the reader to hear Strike’s astute thought process, without prematurely revealing the solution.

The story of The Cuckoo’s Calling, though, is an intriguing one, and it is unfolded with Rowling’s expert timing and sense of natural pace.  The reader is not subjected to a standard Hollywood car chase barrage of action, winding up to a climax that always seems to provoke the inevitable epithet of “page-tuner.” Instead, we are slowly backed away from the pixel-like details of the crime until the scene anneals into a coherent image. Rowling has the confidence and skill to know that her readers are engaged in the tale without resorting to theatrics.

The main weakness of the book is what I felt as a sense of misanthropy of Rowling towards her characters – none of them, neither Lula, her retinue, her adopted family, nor her friends escape a poisonous jab from Rowling’s pen.  Even our protagonist Strike is dressed down as something of a modelizer (see Sex and the City, season 1, episode 2), as he saunters off for a frivolous evening shag with one of Lula’s colleagues and best friend.

Rowling does, in a few instances, shine a softer light on her creations and these instances reverberate with you in part, for their rarity.  One of the passages that gave me pause was her description of the press coverage of Lula’s life, “How easy it was to capitalize on a person’s own bent for self-destruction; how simple to nudge them into non-being, then to stand back and shrug and agree that it had been the inevitable result of a chaotic, catastrophic life.”  This is Rowling at her best. [subscribe2]