The Lathe of Heaven – Review 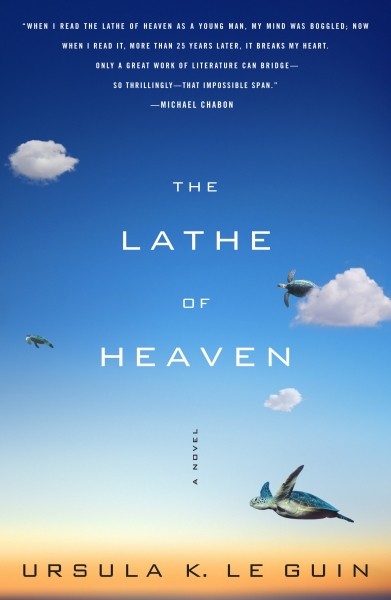 Ursula K. Le Guin has always been one of my favorite science fiction writers for two reasons: (1) her stories are light on hard science and heavy on the philosophy, and (2) she is that rare sci-fi author whose prose is equally as compelling and enjoyable as the ideas contained in them.

The Lathe of Heaven is a fascinating yarn spun with Le Guin’s always fluid, graceful and poetic lines. While not as much of an all-out masterpiece as The Dispossessed, it is still worthy, in my mind, of being a modern science fiction classic.

George Orr is a demure, unassuming man who possesses a strange and unimaginable power: whatever he dreams comes true. His dreams aren’t prophetic in the sense that after he dreams something it happens. It is rather a far more terrifying power in that whatever he dreams becomes reality down to every last detail. In other words, if he were, for instance, to dream that WWII never happened, then such an event is effectively erased not only from the annals of history but from everyone’s memory and every thread of reality that was in any way ever affected by the event is rewoven. People who never existed suddenly exist because their fathers were never killed. The very fabric of the world and its societies are impeccably altered. It sounds like a cool power to have until you really think about it.

A brisk and enjoyable read, The Lathe of Heaven tells of Orr’s quest to rid himself of this godlike but nightmarish ability. My only problem with it is that in making it such a slim novel, Le Guin doesn’t fully explore some intriguing leads that are introduced but not followed. There is an alien race, for instance, that seems to understand Orr’s power and its reality-altering implications and that clearly feels compassion for his agonized conscience. There are moments when Orr suddenly seems to attain a kind of enlightenment in which he understands his role in the grand scheme of things. There are questions raised on the nature of reality itself. These are the elements I found most fascinating yet none of them are explained.

Despite its flaws, The Lathe of Heaven is a psychedelic trip that rivals Philip K. Dick at his diabolical best  and speaks well for Le Guin’s longstanding rule as the queen of philosophical science fiction.[subscribe2]